THE PRESTIGE is everything THE ILLUSIONIST wanted to be – and claimed to be in its trailers – an unholy tale of a magician seeking arcane Real Magic. Overarching the magic, a tale of two men obsessed: one with revenge, one with his art; both obsessions costing each man his life time and time again. And that enigmatic statement will have to lodge in your brain, to fester and flower as it will… 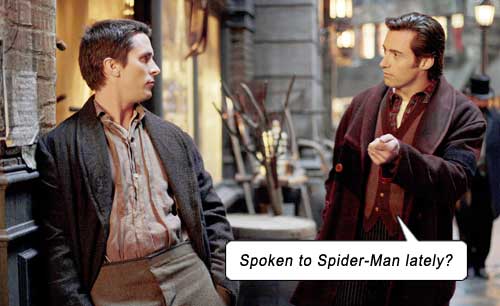 Christian Bale (as cockney as he wants to be) is magician Borden, and Hugh Jackman (as suave as X-Man Logan is not) is magician Angier, friends working as audience plants for an elderly magician, whose female assistant is Angier’s wife (Piper Perabo, from the Julia Roberts School of big-mouth bass masquerading as beautiful women). In tying an incorrect trick knot one night, Borden accidentally gets Angier’s wife killed in a drowning tank, resulting in he and Angier becoming mortal career rivals. Batman versus Wolverine.

Like their alter-egos from other films, Borden (Bale) is the brooding, genius magician whilst Angier (Jackman) is the showman who lives for the quick strike and audience adulation. Borden develops “The Transported Man,” a trick of such ingenuity Angier believes Borden has tapped into Real Magic, despite the advice of veteran magician’s assistant, Cutter (Michael Caine, here playing a kind of Alfred to Borden’s Batman and Angier’s Wolverine simultaneously). 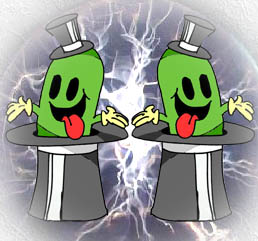 Scarlett Johansson plays Angier’s assistant, Olivia, who flits between both magicians as a double-crossing, counter-spying lover and I cannot discern whether her non-believability is because she is “acting” duplicitous or because she can’t act; Much like Vivien Leigh in A STREETCAR NAMED DESIRE, her false style clashes with all the other real actors; either way, chalk it up to another miscast iPod surfer girl who continues to work in movies purely on the strength of her heaving mammii.

Cutter’s voiceover describes the three stages of a magic act, all quite self-explanatory: The Pledge, The Turn, and The Prestige.

The non-chronological movie itself plays out the three stages, as it Pledges with an opening scene that has us believing Borden has killed Angier in a drowning tank; The Turn takes us deep into Borden’s and Angier’s notebooks, flashbacks within flashbacks showing us Borden, the financially-struggling magician whose incredible tricks are pearls before the swine of London’s working class, whilst Angier thrills the bourgeoisie, making up for half-baked tricks with his showmanship; Borden takes a working class wife (Rebecca Hall) and fathers a child, which stokes Angier’s hatred, until – The Prestige, which, as Cutter narrates, “is the part with the twists and turns, where lives hang in the balance, and you see something shocking you’ve never seen before.”

If you heeded THE PRESTIGE’s opening line, “Are you watching closely?” its myriad mysteries would be laid bare as a Catholic priest’s homosexual sins. But, like all magicians’ audiences, we’re here to be misdirected by the magic.

Neil Burger’s THE ILLUSIONIST made the mistake of creating illusions which were too complex to be real tricks, but THE PRESTIGE goes in another direction, calling upon Science to augment the illusions. As Arthur C. Clarke portended: “Any sufficiently advanced technology is indistinguishable from magic.” 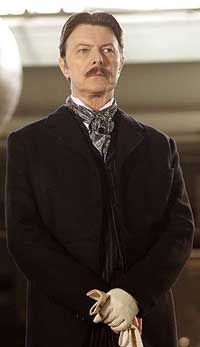 Did Tesla invent Bowie
or did Bowie invent Tesla?

And the scientist enlisted by Angier is none other than “the man who invented the twentieth century” – Nikola Tesla, a real life Hungarian inventor, physicist and electrical engineer (played by David Bowie – ha! A real life genius playing a real life genius! – in the first real acting of his movie career, burying himself in the brow-furrowed role). (If it were not for Tesla’s arcane delving into nuclear physics, magnetism, alternating and direct current – yes, Tesla invented AC/DC before Bon Scott and Angus Young – we would not have those blue “bzzzz” things for Frankenstein movies (Tesla coils) which graduated to those crimson-blue-lightning balls (Plasma globes), also invented by Tesla – and duly misused at drunken frat parties the world over since).

At one point, Tesla states, “Exact science is not an exact science.” Though this may sound like ammunition for creationists and other lunatics, it is actually true pertaining to Scientific Method, which never lays claim to absolute truths, rather “transitional truths” – as new information comes to the fore, obsolete information must necessarily be updated or discarded. Science is pliable, provable, practical.

Still, it is ironic that in invoking the effigy of such a great scientist, the movie takes another Turn and actually breaches the bastion of Real Magic, when Tesla (aided by his Igor, Andy Serkis) inadvertently creates a machine that replicates objects exactly. Angier employs this machine onstage (with blue bzzzz’s galore, natch) to recreate Borden’s Transported Man illusion as “real,” appearing in two places simultaneously. The catch is: he must actually murder his replica every time he performs the act – to avoid hundreds of replicated Angiers. Now that’s dark. And disturbingly amoral. And I love it.

After the morbidity of Angier’s chosen path, the movie ramps to an even darker conclusion, with the beauty of this tale’s denouement lying not in its twists but in the manner writer-director Christopher Nolan unties the tale’s own inescapable knots and proves himself the greatest magician of the film as he artfully dodges glaring plot holes and loose ends with his snake-charming sleight of hand.