For the Love of Prostitution. 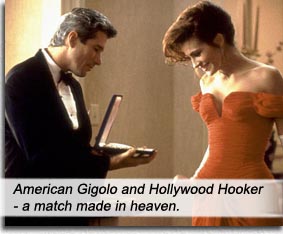 In what may be the most ignorant movie in a decade, a businessman hires a Hollywood Boulevard hooker (renowned for their trashiness, tastelessness, uncleanliness, tardiness and, most notably, their small dicks) who falls in love with him.

Does it occur to anyone how EASY PEASY LEMON SQUEEZY it is to “fall in love” with a billionaire who keeps buying you things? A lapdog suffers the same condition.

Richard Gere is the noncommittal Edward, a businessman whose job involves “screwing people for money,” so finds affinity with prostitute Vivian (Roberts) who does it literally.

But I still don’t get the title: PRETTY WOMAN. Maybe I missed the memo, but are they referring to…? No! They don’t mean Julia Roberts???– Bwohahahaha!– excuse the milk shooting outta my nose, but is that meant to be ironic, like “Have A Nice Day,” or just an outright lie, like “Based On True Events” or “to protect and serve”? Funniest part about the title is that to make Roberts look nominally “pretty,” they had to cast someone EVEN UGLIER as her roommate – enter bushy-browed Laura San Giacomo.

Hector Elizondo has a most sympathetic role, as the hotel concierge who knows his high class regular guest Edward is hiring this classless whore and turns a blind eye to the transaction; he doesn’t judge Vivian’s naïveté or upbringing, but helps turn her from a low class slag into a high class escort.

But does it cross people’s minds that Hector turns a blind eye because of the money that Edward throws at his hotel regularly?

Does it cross people’s minds that maybe Vivian is turning into a cultured debutante BECAUSE it is a rich, beautiful man footing the bill? What if her date was a scrounging, fat, ugly Jason Alexander, who still loved her as much? Alexander, by the way, happens to play Edward’s attorney here. Though he’s rich, he is as unsavory as, well, Jason Alexander, so when he propositions Vivian (while she is living the fantasy lie that she is Edward’s wifey) she stupidly turns him down. Let me clarify to viewers who are also living a fantasy lie, pretending you know nothing about this nightish business: Vivian turns Alexander down NOT through any moral pangs, but because she would much rather get paid and laid by someone like Edward. She fools herself – and you – into thinking it is because she “loves” Edward that she doesn’t want to “cheat” on him – but come on! If I have to spell out everything again about the ease of “falling in love” with a billionaire, we’ll be here for days.

Now don’t get me wrong: morality, philandering, cheating, adultery, prostitution – all these words mean nothing to a nihilist like my bad self (I’m not railing against prostitution; hell, some of my best friends are prostitutes); you yourself place devious import upon these words, then disregard your own rules to root for what you consider an immoral slattern. But – registered prostitute or not – every woman behaves in exactly the same manner as Vivian when it comes to dealing with men: the less that money means to a man, the more she will throw herself at him. And by that, I don’t mean the less he HAS; I mean, the less he cares about how he spends the LARGE AMOUNT he has. Why else do the oldest, richest, most powerful guys have the youngest, dumbest, sluttiest girls on their arms?

A man who throws money at a woman as offhandedly as Edward doesn’t EARN her love or loyalty – he BUYS it. And if you’ve just considered how shallow that makes Edward, how much shallower does it make Vivian, always ready to sell to the highest bidder? It’s not Woman’s fault – it’s an evolutionary survival tactic.

And all the women in the film – and in the audience – look down their noses at the prostitutes plying their wares, or trying to work their way into high society… Honey, there but for the grace of a man’s wallet go you!

PRETTY WOMAN tries to pass itself off as a modern-day MY FAIR LADY (1964) or George Bernard Shaw’s Pygmalion, but it is closer to the source material that both were adapted from, Ovid’s Metamorphoses X, in which sculptor Pygmalion became disinterested in women after seeing some who were reduced to prostitution, carving his own woman in ivory and falling in love with her, before she was made real by Venus.

Comparing it to Ovid doesn’t make it a commendable film. Just because it was a hit with hypocrites doesn’t mean it’s better than MANNEQUIN (1987).

Edward hired the high-maintenance Vivian for one week (which reminds us of the axiom, “You don’t pay a prostitute for sex, you pay her to leave afterward”), after which he wanted to make her a Kept Woman, setting her up in an apartment and seeing to all her needs (i.e. shoes and spas). But Vivian wants more. Of course she does. As Chris Rock notes, “What do women want? – Everything!” His heart and soul as well as his wallet. But there is prioritization applied. Put it this way: if Edward just offered his heart without the money, would she take it? Would she stop hooking for him because he declared his chaste love for her – but wouldn’t spend a dime more on her? It all starts to fall into place like a game of Tetris.

Even though not spending a dime more would truly make Vivian ‘Not A Hooker’ anymore (which is what she seems to be aspiring towards), she would never in a billion years accept this condition after the luxuries she was exposed to. Would any woman? Would you?

Is the hypocrisy starting to seep into your little pedestrian brains, pagans? You publicly vilify a “profession” that is usually resorted to through necessity, not choice. And if necessity, then PRETTY WOMAN is telling us that within every low class trash is a high class socialite. You seem to concur, which is why you love Vivian making shovel-mouthed smiles at Edward. Then why is prostitution still illegal? Why do you vilify HOOKERS AT THE POINT or G-STRING DIVAS? Why do you look down your nose at “exotic dancers” and escorts? Why does the media only profile low-class skanks and sadistic pimps, and report only streetwalker arrests, skewing the perception of prostitution towards dangerous, diseased trash-fest?

But look again at your hypocrisy in rooting for this evil-hearted man who doesn’t produce anything, doesn’t create anything, has no tangible or useful product to offer – he didn’t NEED to smash that last client to secure his future, he’s already a billionaire. You know what would purify him properly?

If I was a pretty woman being courted by a man like Edward, it would impress me more if he gave away ALL of the money he made destroying other businesses. THAT would make him a “good” person…