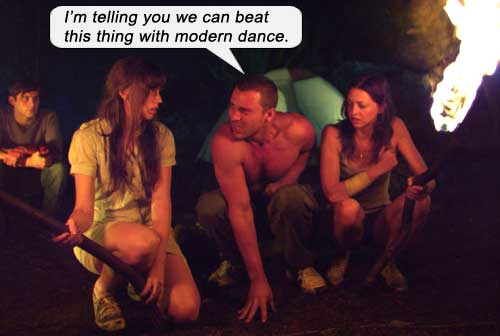 Fear and Loathing and Shark-Teeth.

It’s like bad-delicious candy. You know it’s not healthy, it’s not educational, and it will probably destroy a few brain cells. But you eat it anyway. It’s PRIMAL.

This bad-delicious Aussie candy is mindless, gory, indie – and effective. Six college-age kids visit an Aboriginal rock-painting deep in the Australian bush; cut off from civilization, they discover there’s something in the water that turns them mindless, gory and indie.

Zoe Tuckwell-Smith heads the cast, as the Sensible Chick with the need to overcome her claustrophobia, as the gang traipse through a foreboding cave to access the rock-painting, while she drives around the mountain instead. Wil Traval (oozing Dane Cook) is jock and ad hoc troupe leader, Dace. Are you laughing at the bold typeface of that name as hard as I am? The rest of the gang is as stereotypical as you would imagine an effective actioner has to make them for easy identification. 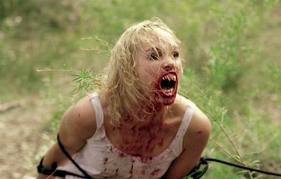 The first foreshadowing of things askew is when Kris and Dace ponder over the rock-painting and a bunny with shark-teeth attacks them. That night, after loud sex with Chad in one of the pup tents, Mel goes skinny-dipping in the billabong. Soon, she is feverish, her teeth fall out and the gang is desperate to get her to a hospital – but the car tires have been eaten by insects with the same shark-teeth as the bunny.And soon Mel – with no explanation, except for the fact that she immersed herself in the tainted billabong – also grows shark-teeth and goes “primal,” mindlessly attacking the gang, evading their attempts to entrap her, and killing and eating them one by one.

Written and directed by Josh Reed (co-writer Nigel Christensen), as simplistic as the movie sounds – and it is – PRIMAL showcases some good story structure, foreshadowing, callbacks and payoffs, such as Zoe overcoming her claustrophobia in the most badass of ways. Sharp camerawork and editing keeps it kinetic, with a climax in the foreboding cave So-Bad-It’s-Maybe-Classic, where the filmmakers just ran out of budget and ideas… There’s sex, there’s gore, there’s girls covered in grime wearing tight short shorts – and it’s all gratuitous! Zoe Tuckwell-Smith is easily the feature character with an arc, and the only actor in the cast who can display more than one emotion.

You won’t be required to use the thinking part of your brain for the remainder of the film – but you won’t be able to look away.