All the ladies WISH they could see JGL from THIS angle…

There’s a new black market pill on the streets of New Orleans. It’s called “power.” Gives you five minutes of a super power. But you don’t know what that power is until you take it. You might get super-strungth, become fast as a cheetah, or become invisible like a camouflaging chameleon. Or it might just blow your guts out from inside. Would you take it? Hells to the fuck yeah!

Young Robin (Dominique Fishback) pushes the pills on the street, to pay for her mother’s medications. Joseph Gordon-Levitt is undercover cop Frank who combats the street thugs that abuse the pills, by buying them from Robin illegally to make himself bulletproof against the thugs. Jamie Foxx is Art, a mysterious special-ops drifter who enlists Robin’s aid in tracking down the source of the pills; he’s the bad boy that Motherfucker Jones was TRYIN’ ta be.

PROJECT POWER is a superhero movie for Millennials – and for the first time, I’m not using Millennials as an insult. Drawing from the well of superhero lore forged by DC and Marvel, PROJECT POWER explores how this new generation might handle the indecencies and inequities of being super. In the Golden Age it was all black-and-white, good-versus-bad morality fables. But in this fragmented, dissociative age, with great power, there’s pretty much NO responsibility. As soon as you twist that pill and suck it down, you are super for an eyeblink of your existence – and the burden of power is dumped on you for only that 5-minute flash of ultra-cellular activity. Power is fleeting and voluntary. Do you do good? Be bad? Altruistic? Selfish? But no matter what you choose – CONSEQUENCES. 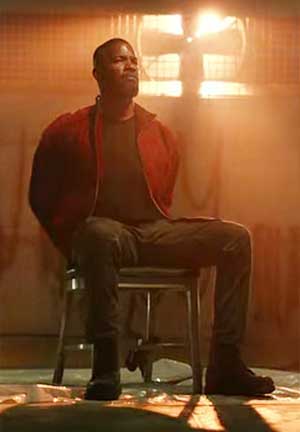 All the ladies WISH they could do this to Jamie Foxx…

Art seems like a bad guy at first. But hey, it’s Jamie Foxx; after blood-soaked battle with baddies, he reveals to Robin he’s trying to rescue his kidnapped daughter from the creators of Power, defense contractors named Teleios, who experimented on his DNA; years later, when his daughter inherited powers without taking pills, Teleios kidnapped her to “try to create superheroes”; to weaponize her DNA for “PERMANENT power – the next step in human evolution.”

So Art is missing a daughter; Robin is missing a father; their team-up is more than just – [ring ring!] – Hello, Movie Tropes? Yes, I got the message.

For every punch thrown, there is a social commentary jab, “The power always goes to the ones who already have it,” with questions on abuse of power, desperation to acquire it, and the mishandling of it, as when Colson Baker, a ghetto junkie, pops 3 pills at once, which blows his mind – all over the ghetto. Beyond his flaming fight scene, there is a cruel subtext: that even if such power drops into your lower class palm – you can’t handle it.

Yet there is an elegant message: Art cajoles Robin into freestyling (what the OGs call “off the dome”) – she does it WELL. Art is shook: “Oooh, you smoked that! That’s your power. You leverage that, and you use that power to take the system down.”

And right here for all to see, young Fishback DOES display her power – acting! Bringing a fierce spontaneity that I’m sure the director never saw coming. And I am so glad to see her name third in the credits – behind Foxx and Levitt. Now that’s power.

Like every movie that mentions evolution, no one has a clue what it really is. Rodrigo Santoro is pusher Biggie, beta-testing Power on the streets of New Orleans, boasting that they’ve bottled what Nature bestows on other animals – lizards re-growing limbs, octopi camouflaging. His pitch: “Stop wishing. Start doing. Find your power!”

The primo scene is an unbroken take, seen from INSIDE a Perspex chamber where a girl is freezing to death from her pill. She screams as the air shimmers into ice crystals, while all the gunfire and struggle outside is muffled, as Art rampages his way through henchmen to capture Biggie. Even after the girl freezes solid, the action continues outside in 360-degrees until the last henchie falls. The jewel of the movie.

Forcing Jamie Foxx and Joseph Gordon-Levitt to team up for the finale – the last time there was this much cool in black and white was Will Smith and Jeff Goldblum in INDEPENDENCE DAY. 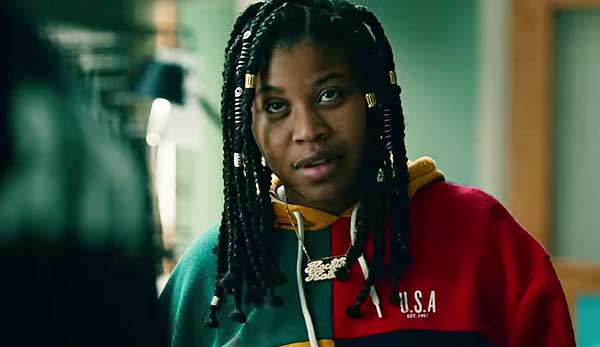 PROJECT POWER is a new take on the now-unoriginal premise of super-powers, and is kinetically written by Mattson Tomlin and deftly directed by Henry Joost and Ariel Schulman, hurtling us giggling like teen titans toward a finale that’s a DIE HARD explosion meeting a TRANSFORMERS explosion and having little baby explosions.

Allusions to a spectrum of pop culture power: Batman and Robin (wasn’t JGL Robin in that tiny Nolan film?); Santoro becomes a monstrosity like Jekyll in LEAGUE OF EXTRAORDINARY GENTLEMEN; Art’s power is too destructive to be unleashed, reminding us of Marvel’s Black Bolt, whose utterance could destroy a planet; there’s a running gag on JGL doing Clint Eastwood impressions– Clint Eastwood? At last – some REAL Power…