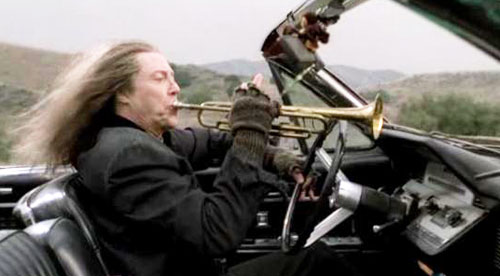 Turning Cities to Salt, and Movies to Shit.

Christopher Walken, former angel of death, returns in THE PROPHECY 3: THE ASCENT and does nothing, except walk around with a spectacular mullet, wearing his pants a little too high. Oh, and he’s the Angel Gabriel, mystically powerful villain of two previous films. He’s the guy who could “turn cities to salt” but could never quite work out how to kill a little girl (THE PROPHECY, 1995) and a fetus (THE PROPHECY II, 1998); now demoted to a bum, cursed to walk the Earth and learn how to drive.

Another angel of death, Zophael (Vincent Spano), has descended to Earth to kill the child that Gabriel couldn’t, because there’s a war in heaven and whatever-not-listening– The child is now a teen named Danyael (Dave Buzzotta), spawn of an angel pimpmaster and a human flashdancer, with the immortal powers of an angel and the generic talent of a TV actor.

But Billy Bibbit shoots Danyael first! Yes, Brad Dourif plays a blind zealot who hears voices and burns down Danyael in the first scene. But it doesn’t matter, firstly because Dourif unfortunately disappears completely from the film, having served his plot point; secondly because Danyael – like all angels – can’t be killed unless his heart is torn out. Kinda like THE HIGHLANDER rule that sez they can’t die unless beheaded. (Except in the first PROPHECY, Walken got his heart torn out by Viggo Mortensen (as Viggo does to oh so many women), yet was walking around boasting about cities-to-salt in the second film, so… who cares, right?)

Danyael’s girlfriend is Magdelena “Maggie” (Kayren Butler, hot enough to give a pass on her atrocious overacting). Moriah Shining Dove Snyder cameos as Mary (from the first film) – and boy! She’s gone from a frumpy little girl to a hot tamale.

Then there’s the doctor (Steve Hytner), who has appeared in all three PROPHECY films, his smugness growing to Tom Cruise levels and his sex appeal going in exactly the opposite direction. The most beige of any character actor ever to appear onscreen, he squeezes as much personality into his ten-minute cameo as smugly possible and still achieves a boredom quotient of drying paint. If there is a graph for compelling performances, this guy registers at just below zero. You’re looking at the only actor in the world who has probably never been laid…

Like TERMINATOR 2: JUDGMENT DAY, the filmmakers have re-jiggered Gabriel’s character to be a “good guy,” protecting Danyael on his quest to blah-blah, with newly-arrived longcoat Zophael the bad guy. There’s a burned woman pretending to be Jennifer Beals, and her son Danyael fulfills the role of Edward Furlong, in that you want to bitchslap him as soon as he starts talking.

Why is Gabriel even here, except to pick up a paycheck for marquee strength? For a direct-to-video release, we wonder how small that paycheck was; was it even worth wearing that mullet wig – or was that really his hair by then because he couldn’t afford to style it? (Interesting that Gabriel tunes his car radio to the song Telstar, a tune that almost mimics the CHARIOTS OF THE GODS melody.)

So: two actors whom we care nothing for, chasing each other toward a destiny we care even less about. Danyael runs to some desert to kill Pyriel (Scott Cleverdon, who plays this prideful angel like an effeminate metal singer from the 80s), who wants to destroy mankind and become “the next god.” And Zophael is pursuing Danyael to – stop him? Help him? Wash his car? You lost me again at the corner of lackluster direction and 80’s hair band.

By the way, Zophael is being driven by Maggie because – like Gabriel before him – he “can’t drive.” What is it with these angels and driving? Why not FLY, nitwits?

Movie keeps recalling the best image from the series – the angel skeleton fused with the stony ground from the first film’s opening scene. It doesn’t help.

Why do these celestial beings bother stabbing each other when they cannot die that way? They shoot, stab, punch, throw, threaten hollowly, yet never directly go for the heart-pull until the producers run out of filmstock. And why is Danyael considered the only being that can stop Pyriel? He doesn’t invoke any sacred texts or utilize any angelic knowledge; from the looks of it, anyone with the skills of Jackie Chan to fat Steven Seagal could wipe the floor with this Next God, if that’s any indication of his krav maga skills.

When Pyriel dies, he is accosted by what looks like a truckload of naked women– hang on! The 72 Virgins?! Oh, so this is the muslim religion!

Gabriel then ascends into heaven to comply with this movie’s title and to show off his nice pair of leather pants.

Unhallowed be thy names…

GABRIEL is apparently “human” in this tale, although I cannot figure which biblical text they are satirizing. When an angel fails a task assigned to them by God, I can understand why the petulant prick would turn them human to make them suffer (even though humans are supposedly His crowning creation), but if Gabriel was on that murder quest as a rebel angel, then do the same punishments apply? But the movie does not even follow the rules set by its own universe, because he was killed in the first film – via the prescribed method of having his heart ripped out – and was sent to hell, then he came back – as an angel. Uh, whatever.

ZOPHAEL  is not in any biblical literature, and his designation as “spy of god” and “bridge between rebels and loyal factions in heaven” is as specious as it sounds. The least they could’ve done is tie this angel to some established mythology – there are so many angels! But no one was even trying.

PYRIEL is also absent from any literature except in relation to this film, and sounds like he’s invoking the sacred substance of Pyrex. Even if his name is spelled archaicly (Puriel, Uriel, Puruel, etc.) this angel is NEVER described as “the next God.”