Hells to the No.

Again with the boasting: “I could whisper a suggestion and have you step in front of a subway train, I could force a neighbor to hurl you down a flight of stairs. I can put a baby in your belly that would rip its way out of your womb in three days–” Okay, I wanna see that last one. An angel boasts vacuously to the woman he is hunting… then walks away like a big-mouth douchebag without doing ANY of it… 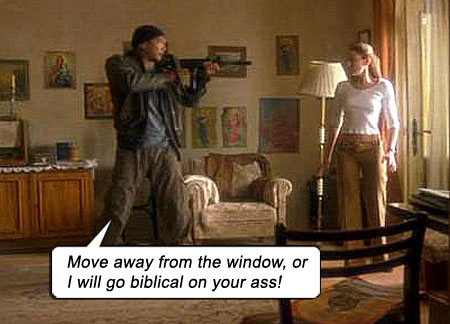 The PROPHECY series once again falls to Earth like Satan banished from heaven. The last entry, UPRISING, was quite intriguing and well-made (for a PROPHECY movie), but now all the insensate problems that made the first three films such dungheaps are again brought to the fore in the fifth entry, THE PROPHECY: FORSAKEN.

Allison (Kari Wuhrer) returns, holding tight the Anti-Bible (which is really just the Bible with addenda), not letting it fall into the wrong hands. Those wrong hands belong to Angel Stark (Tony Todd, CANDYMAN). He’s the one with the big mouth and nothing to back it up except his love of Christ. He wants to know what God has dictated just on the very last page of Revelations – the name of the anti-christ, who will bring about Armageddon. He’s worried that all the humans who survive Armageddon will become the favorites of God, instead of the angels. Satan wants Armageddon to happen – to fill up his dance card, so helps Allison protect the Book. Meaning Allison is working with Satan to allow the anti-christ to live, so that Armageddon will happen and Bruce Willis will sacrifice himself for all our sins. So Stark wants to kill the anti-christ as a child, so that Armageddon won’t happen and the angels can remain the beloved of God…

This is the plot of PROPHECY: FORSAKEN. And we wonder why the bible makes utterly no sense.

Jason Scott Lee (SOLDIER) is wasted here as zealot Dylan, killed and brought back to life to serve Stark, but helps Allison escape Stark instead. He convinces curvy wet dream Wuhrer to get naked and change her clothes in an alley, to make her look like a hooker, because – he tells her – the angels hunting her won’t recognize her that way. Oh sure: we’ve ALL used that excuse to get a girl naked in an alley, right fellas?

John Light returns as Satan The Runway Model. (Is this not how they say the devil will come at you? Not as a monster, but as a dreamster. After numerous TV and video features, Light just doesn’t seem to have the agency clout to have landed the breaks that a guy with his stunning looks usually gets).

Stark acts like he’s sniffing out the Book, stashed within the wall; his eyes light up – he’s definitely smelled it! Punches a hole in the wall, drags out – a fake Book decoy! We ask ourselves: What the hell was he sniffing then? If he has the power to sniff out the Book, then that power should be telling him the Book is nowhere in this house! Joel Soisson is the numbnuts responsible for this debacle. (Producer on all three original PROPHECY films, and also writer of DRACULA 2000 and its sequels; strangely enough, Soisson also wrote and directed the previous PROPHECY: UPRISING, which was surprisingly good. Now even more of a surprise after noting his track record!

A homeless guy stabs Allison. She’s suddenly Black Widow and kicks his ass. Then she has to Act Her Stab Wound every so often and wince, so we don’t mistake the red dye on her sweater for red dye. When she shouts at Dylan, “All we have to do is believe!” I kicked over the TV and cancelled my Netflix account. You just DON’T say that line in a movie and expect to be taken seriously anymore.

And look – here’s the name of the anti-christ. Spoiler Alert: It’s the nicest member of Monty Python. See how the devil comes at us? As MICHAEL PALIN! 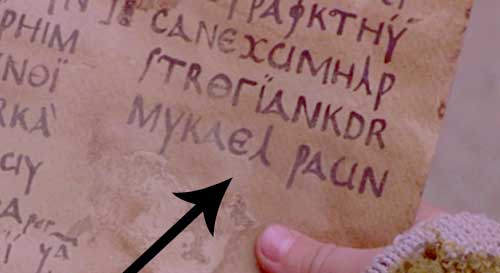 The last page of the Book Of Revelation: The Life Of Brian.

Unhallowed be thy name.

ANGEL STARK: Yes, the blessed Angel Stark, from Holy Scripture, who appeared to the virgin Robert Downey Jr., and bad him build a suit of titanium-alloy armor 240 cubits wide and 600 cubits long. This Downey did, and the Lord looketh upon Downey’s work and behold, it was good, and lo, it doth maketh 650 million domestic box office.