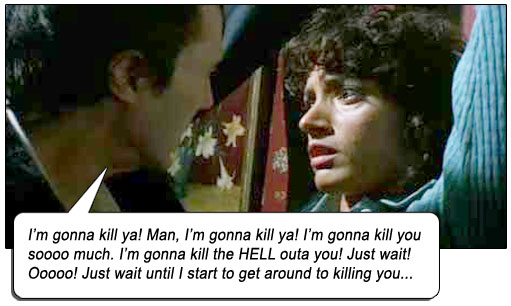 Angel Gabriel (Christopher Walken) is thrown out of hell by Lucifer, and proceeds to cause hell on Earth by starring in THE PROPHECY II.

Dying at the end of the previous film (THE PROPHECY) meant nothing to Gabriel, as dying at the end of this movie will mean nothing as well. Why then, expend all this effort in the meaningless, directionless, contradictory, confused pointless holy crap in between?

The synopses say Gabriel has returned to stop the birth of a Nephilim – the spawn of an angel and a human – but I beg to differ. Gabriel seems much more interested in boasting about how he can turn “rivers into blood, kings into cripples and cities into salt,” because when he does have the opportunity to stop the birth of the Nephilim – no less than three times – all he does is talk like a Bond Villain, throw like a Terminator and boast like a bitch. And besides, the angel and human have not yet mated at the time of Gabriel’s expulsion from hell. So uh, was that just a convenient coincidence that he happened to be let out on bad behavior just before this randy angel poked a human? How was he going to spend his time if this unholy fuck didn’t transpire? Visit Coney Island? Fund more Adam Sandler films?

Angel Danyael (Russell Wong) impregnates human nurse Valerie (Jennifer Beals, FLASHDANCE), because there’s a war in heaven and only by mating with her can it be stopped. (We’ve all used that excuse to get into a woman’s pants, am I right, guys?) Luckily, now Gabriel has a purpose in this film and can stop playing HALO 3 to pursue and kill Valerie. He says it’s because the baby will have “the power of an angel and the free will of a human.” (Which implies angels don’t have free will, yet Danyael keeps defying angelic protocol to protect Valerie. That means free will, birdbrain.) Anyway, so what if the baby has those things? What’s it to Gabriel? There is also some blah about this baby bringing the “war in heaven” to an end. As it happens, nothing that anyone says about this baby will come to pass. 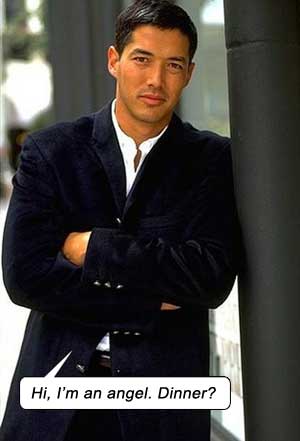 Notwithstanding the fact that this holy fetus means angels have ballsacs and spermatozoa and urethras and the desire to perversely mate outside their own species (what kind of sick monk from the Dark Ages wrote this shit?!), Danyael “falls in love” with Valerie (more “free will”!), and protects her from Gabriel’s talky death threats. (Wong is quite the handsome Asian leading man, and I was very glad to see this casting; unfortunately, he was cast in this, which cast his career into the lake of fire.)

No one from the previous film (except Walken) appears here, although there is a Pretend Viggo Mortensen as Lucifer shrouded in dark, and a Pretend Elias Koteas, bearded and praying we won’t notice.

Gabriel still can’t drive (“kings into cripples” but not one smidgen of that power utilized to learn how to shift a gear and push a pedal?), so enlists the aid of suicide victim Izzy (Brittany Murphy). She also helps him with the computer that he can’t understand. So angel sperm is compatible with human ovum, but angels are incompatible with DOS.

Danyael flees with Valerie to Eden (which is a factory slum in Detroit apparently) where she meets head angel Michael (Eric Roberts – now we know the devil is winning). Gabriel finds them, and is invited in by Michael– Waitaminute! I thought Michael ordered Danyael to mate with a human so the angel-baby could win the war in heaven blah blah bullshit but now he says, “Whether she lives or dies is her choice, not ours.” You lost me at angel-urethra.

Remember, Gabriel kills people along the way by putting his palm to their foreheads and saying, “Shh!” whereupon they drop dead. So he’s about to kill Valerie. But then he starts talking. Valerie talks back at him, because that’s how you stall murderous angels who can turn rivers to blood. He’s obviously got nothing better to do because he listens; until Valerie lures him to the edge of a catwalk and falls with him in a seductive embrace. Gabriel lands on a spike and dies. Or not. Who cares?

A perfect example of why it’s a such a bad idea to let an “executive” write and direct, PROPHECY II is written and directed by a producer, Greg Spence (who would stick to producing after this execrable straight-to-video outing).

Funny thing is: I love the mythology of angels and demons. When taken at face value, these myths are interesting diversions, and I have volumes in my bookshelves that cover the spectrum of holy and unholy esoterica (from Davidson’s A Dictionary of Angels to Carus’s The History of the Devil and The Idea Of Evil). But I regard them as interesting in the same way I regard any good fiction as interesting (from Asimov’s Foundation series to Tolkien’s Lord Of The Rings series). As long as fiction is regarded as fiction, we can suspend our disbelief and enjoy it, but “biblical” stories are afforded such somber cultural weight (even though they are merely kiddie stories with morals, like any Aesop’s Fable or Rudyard Kipling origin tale) yet when held up to the light, they buckle under the contradictions contained within their own tales. Nothing makes sense!

I know you. You want PROOF that nothing makes sense. Which is ironic, as you accept everything said by your child-rapers– I mean, priests – without any proof.

Proof? Hmm, let’s see… In the stinger scene, a title card “Five Years Later,” and we see Valerie putting her angel-kid on the school bus. Bus drives through ghetto, where we see: a homeless guy accepting soup from a passerby. It is Gabriel. Muttering, “Everything’s gonna be made right…” So uh, he’s not dead, and been biding his time in a urine-soaked jacket for five years for, uh, what exactly? What’s the strategy? Couldn’t he have just Stayed Alive when he fell on the spike, pulled himself off the spike and just gone after Valerie then and there? He’s been stalking her for five years, watching this Neph-kid grow up and go to school by himself on the bus every morning. You’re the city-to-salt guy, right? Think you can manage a bus-to-salt? Then walk up to the kid and break his neck. Do I have to paint you a picture, you herald of the main fake god of Western European culture? Does the fact that Neph-kid has been alive for five years mean that the “war in heaven” is #Winning, like Charlie Sheen? How exactly? And if not, does the Neph have to grow up to lead an army against Gabe? And if so, old cities-to-salt Gabe better get his swerve on to crush the kid’s skull pretty soon. But if it wasn’t so urgent to kill him, why pursue Valerie so desperately while she was pregnant… and a thousand other inanities that won’t matter to any of us in the final telling.

You see, we’re already doomed. We – the human race – created this movie. Which means we’re all going to hell.