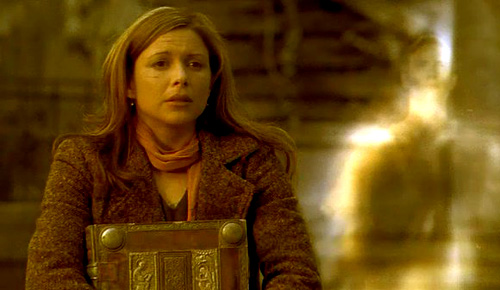 “Oh, Angel Special Effect, I’m too cute to have to read a BOOK!”

My gorge is up rising.

There’s this “anti-bible,” see? And the Big Man Himself is narrating it even at this moment, burning the ancient Aramaic into the pages. He’s putting the finishing touches on The Book of Revelations because it went to the printer too early the first time, apparently. And – like all three previous PROPHECY movies – it’s going to start another war in heaven. (Heaven’s getting to be the Middle East of Space…)

THE PROPHECY: UPRISING is a surprising revelation [oh, somebody slap me!], as it reboots the PROPHECY legacy with better ideas, better actors, better production values and better not let Jesus know.

Joel Soisson (producer on PROPHECY 3) screenplays and directs this straight-to-video release, which retains a gritty realism, even though it’s ultimately just a silly movie about angel wars that can’t possibly make sense, but Soisson keeps a lot of the contradictions and stupidities out of the dialogue, so that the story can make nominal sense. In the previous three movies, Christopher Walken as evil Angel Gabriel would spout inane jibber-jabber about having powers to turn kings into cripples and rivers into blood and then a girl would push him and he’d fall over. Here, the angels and devils play everything closer to the vest.

Sean Pertwee (Alfred on GOTHAM) is detective Dani Simionescu, investigating bizarre murders where people are getting their hearts ripped out through their ribcage. He is joined by mysterious Interpol agent Riegert (John Light, with a three-day growth to die for) who never makes the mistake of revealing too much too soon. He appears here, then there, with no explanation and with an agenda that is revealed piecemeal. Is he an angel? Or something else? 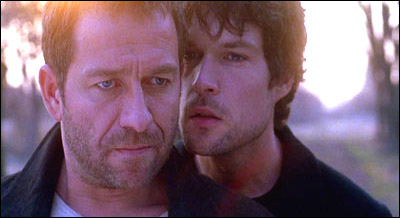 Prophecy: the new fragrance by Bijan.
Smell like an Angel!

Set in an Eastern European country that is even grimier and danker than London [I kid the British, of course – there’s no place grimier and danker than London], angel forces are after the anti-bible, led by Belial, who is a serial possessor, meaning he inhabits people as required, then discards them by killing them with the next person he inhabits.

And Kari Wuhrer (the spectacular gypsy hottie in THINNER) is Allison, entrusted with The Unholy Book, to… uh, deliver it to God? return it to the library? keep it safe in her panty drawer? I’m not quite sure. Anyway, dark forces from heaven and hell are pursuing the Book for very surprising reasons, that make no sense. Because they’re angels, see?

Pertwee is especially commendable, in a role that I’m sure is hard to retain a straight face in, yet he is very believable as the damaged detective. Movie actually swerves to moral ambiguity as the Prince of Perdition makes himself known and correctly assesses, “Right now, I am the lesser of two evils.”

UPRISING puts an interesting twist on angels and devils, with some resourceful moviemaking and solid characters to prop it up, although, as usual, if we probe too deeply into the motivations of the two classes of heavenly beings, there’s no reason for them to potter around Earthly climes at all. Is heaven that boring? No wonder they keep starting wars…

Unhallowed be thy names…

BELIAL is an angel appearing in many arcane texts, from the New Testament to the Hebrew Bible and the Dead Sea Scrolls. So I know him well as a “real” evil angel (the name translates generally to “worthless”), rather than a figment of some Hollywood writer’s imagination (all of whose names translate to “worthless”).  But I always thought his name was pronounced “Beh-LIE-el” (and it sounds stronger that way), rather than the way they pronounce it in the movie, “BEE-lee-el.”