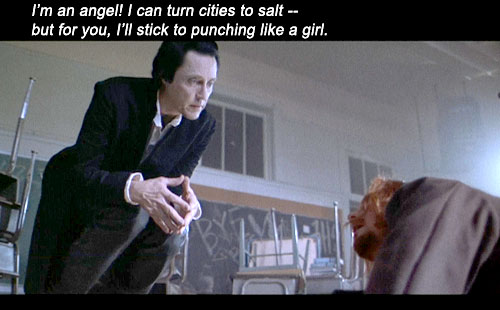 Angels In The Outhouse.

Angel Gabriel comes to Earth to extract a soul and destroy heaven. Like the catholic religion, THE PROPHECY is confused as hell.

A spine-shivering opening sequence: camera pans down on a lone figure standing over a charred skeleton – of what appears to be a human with wings, bird-like appendages scorched into the ochre stone ground. The figure narrates of a war in heaven… uh, okay, you’re losing me. The figure is Eric Stoltz, looking like Jesus (as usual, but playing Angel Simon), and his final words – as his pupils change from all-black to peachy – are, “I never thought the war would happen again.” After a few scenes, Stoltz would disappear from the story like sanity from christianity.

Acolyte Thomas (Elias Koteas) prostrates himself before some child-rapers– I mean, priests, to take his final vows of pedophilia– I mean, priesthood, when he is accosted by visions of priestly sexual pleasures– I mean, torment. He screams and goes home to become a detective instead. Now he starts narrating, “Some people lose their faith because heaven shows them too little, but how many lose their faith because heaven shows them too much?” I’d wager: zero. Because it’s not a case of “faith” – if heaven kept showing you visions, you’d have TOTAL FAITH in its reality; but he is confusing “faith” with “approval” or “endorsement.” He doesn’t enjoy the visions, but how is that in any way tied to believing they exist? If you believe they are, in fact, coming from heaven, then BOY have you got faith. Ironically, now I’ve lost all faith in the movie. In the first five minutes, writer-turned-director Gregory Widen (in his only directorial effort) proves he is clueless, and directing in limbo. You’ve got one hour and 25 more minutes to fill Gregory. Let fly the holy shit.

Feverish talk of Gabriel (Christopher Walken, talents wasted) creating two hells, “and that’s one too many.” So sayeth Lucifer (Viggo Mortensen, garbed in black clothes and blacker puns). Inane talk of a soul that Angel Simon hid in a little girl, Mary (Moriah Shining Dove Snyder), that Gabriel pursues, apparently having to “rip her apart” to get it. But, uh, when the soul went IN, there was no wetwork; why not extract it the same way? And isn’t a soul intangible; does one really need to rip through physical organs to get it? Two minutes after this incognizant statement, Gabriel boasts to the two people trying to stop him, Thomas and Katherine (Virginia Madsen, protector of Mary), “I’m an angel! I kill firstborns on their momma’s watch, I turn cities into salt…” Well, why are you having such a problem with two humans punching you like girls? Why even bother talking to them?

Religious-toned movies like THE PROPHECY would be far more enjoyable and respectable if there weren’t constant inconsistencies and contradictory rationalization in line after line of dialogue, in scene after scene. It’s about Catholicism – oh, that explains it… Like every priest who has to act like he really believes the guff he’s dribbling at the altar, THE PROPHECY is as scatterbrained as it is unholy and irreligious.

In one scene, Gabriel puts his hand to the forehead of a nurse and says, “Shh.” She’s out like a light. There’s another power he could have used on Katherine and Thomas. Is this guy just toying with everyone like a Bond Villain?

Viggo Lucifer wants to defeat Gabriel because he doesn’t want Gabriel’s nuveau hell interfering with his own Original And Best Hell (or as some biblical scholars call it, Hell Classic), so he makes a deal with Katherine to help the humans (whom he calls “talking monkeys”). It’s as pathetic as two cover bands arguing in the parking lot of a rock venue, “We’re the better Boston Tribute band!” “Nah-uh! You don’t even do the Smokin’ solo correctly!” “Yeah, well, you don’t even have a keyboardist, so how you gonna do that solo on guitar?!”… Hell is already on Earth.

But what does Lucifer care if there are two hells? He says he wants heaven to reopen. Really? But doesn’t he get more business if heaven is closed to the public? How do you “close” heaven anyway? Is there a CLOSED sign on the pearly gates? Is there a street blocked off by divine orange cones that you drive around and then end up in purgatory instead?

Katherine flees with Mary to a Native American reservation/refuge. Because Indians are “spiritual,” see?

And Gabriel follows in a taxi. Apparently, he needs zombie Amanda Plummer to drive him around because he “can’t drive.” Uh, Mr. director, you are joking, right? Explain how he appears everywhere at will? Oh, that Uber account. Waitaminute, he can “turn cities to salt” – how about employing that kind of willpower to some driving lessons? Jesus Fucking Christ!

Gabriel finds it hard to attack Mary in the sweat lodge, so I guess the Native American religion is the right one. He proclaims: “I’ve come to feed on the guts of your little Mary!” I wonder what kind of nutrition angels gain from human guts.

Lucifer eventually kills Gabriel physically by tearing his heart out. I guess he couldn’t do that in the beginning and save us the whole charade of plotting with Katherine and whining about two hells and everything… because?

At the conclusion of battle, Thomas and Katherine are all bloody. He starts kissing her– Hey, hang on, buddy! I know we’ve been running from danger and beaten up by angels and seen the skies riven in fury together, but who exactly said we were an item?

A flesh-crawling voiceover about faith and souls and other crap ends this irrelevant, contradictory, ludicrous, witless prayer for the stupid, made by talking monkeys.