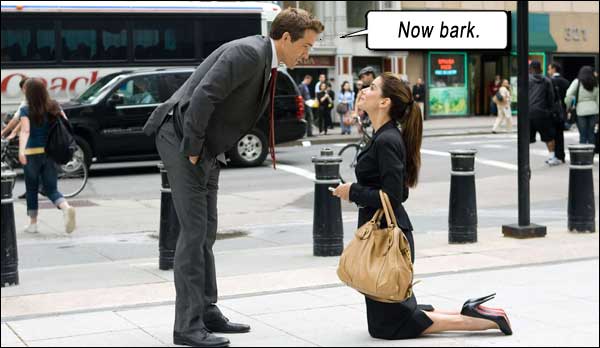 Predictable? Check. Funny? Check. Cute little white dog named Kevin? Check. So we know what to expect from this crap going in. So what makes THE PROPOSAL so unbearable? The premise.

A hated editor-in-chief, Margaret (Bullock), blackmails her ambitious assistant, Andrew (Ryan Reynolds) into marrying her so she can remain in America after her Canadian visa expires.

You lost me immediately: a person in Margaret’s affluent position can afford lawyers to ensure that would never happen. On the common chance the startlingly inefficient Immigration and Naturalization Service does screw up paperwork (which they did for me!), she would – again – have her lawyers pummel them (like I did!), not tramp to the INS building and stand in line, or – now we’re entering pure fantasy! – be granted an interview immediately with a – more fantasy – white, English-speaking officer (Denis O’Hare).

Taken as ignorant storytelling, we move forward. Andrew in turn blackmails Margaret for an editor’s position or he won’t help with her scam. We don’t bother pointing out the thousand other legal options and loopholes in the plot, because by now it is obvious the characters are too dumb to take our advice anyway.

But let’s get this straight for American muttonheads who believe that a “Resident Alien Card” (aka Green Card) process involves exams where you are quizzed like a schoolkid regarding which side of the bed you sleep on: there IS no such quiz!

Take it from someone who suffered five years through the process: even if you’re faking the marriage, an interview like the one Gerard Depardieu fails in GREEN CARD (1990) only involves parroting facts – the real horror of the Green Card process is the stark raving inefficiency of the Immigration and Naturalization Service itself. As Margaret correctly asserts, the INS only assign investigators to check on “terrorists, not book editors.” Margaret and Andrew would have been lucky to get a Hispanic lackey who made them wait only four hours before mispronouncing their names calling their case. Instead, they get an officer who threatens to “check on them” at microbial levels, as if the INS has officers with that amount of time to waste. All they want is to ensure you insert yourself into the American economy, to generate income, to take it from you “legally” through taxes and other swinish practices.

The story takes Margaret out of her comfort zone of severe skirts and pumps so high her backside looks like a baboon in estrus, and plants the couple in Sitka, Alaska, to meet Andrew’s parents. Though we know the filmmakers are trying to show Margaret’s witch heart melting in this beautiful landscape, they only highlight more failings of the plot – the chemistry between Margaret and Andrew is non-existent and none of Andrew’s family notice. His mother (radiant MILF, Mary Steenburgen) and grandmother (87-year-young Betty White) are so buoyant and welcoming, I don’t have the heart to tell them they’re in a bad romantic comedy.

They’re portrayed to be such loving, stable people that they “accept” Margaret no matter her clinical coldness toward their son, who reciprocates with clinical coldness of his own. Either they’re not mentioning the couple’s detachment because they’re sensitive – or they can’t see it, in which case, they’re mildly retarded.

Craig T. Nelson is the only realistic character, as Andrew’s unrelenting, unforgiving father – until he has to cave to the unrelenting Romantic Comedy Arc of “finding his heart.”

Malin Ackerman shows off her beauty as Andrew’s smalltown ex-girl, but unfortunately, does no stripping.

The two funniest scenes involve Andrew caught off-guard, thinking on his feet: when Margaret announces she is marrying him, as her boss breaks the news that she has to leave the country; and when both Margaret and Andrew relate the story of How They Met to a roomful of people, each taking up the story’s slack from the other as they realize the other is making them look ridiculous in the story. Of course, the scene that this movie’s target audience find the funniest – Margaret and Andrew colliding with each other nude – is contrived, idiotic, brainless and utterly hot for chicks.

Written predictably by Pete Chiarelli and directed adequately by former choreographer Anne Fletcher, THE PROPOSAL is one of those films where we know what’s going to happen: two people start out by hating each other and end up liking each other. Which is a twisted coincidence because I went in liking the movie and ended up hating it.