In 1800’s Australia, somewhere in the rugged skeleton colonies of New South Wales, police trooper Captain Stanley (Ray Winstone) puts this proposition to Charlie Burns (Guy Pearce, greasier and grimier than he was in THE HARD WORD, 2002 – if that’s even possible): Kill your older brother to save your younger from the noose. 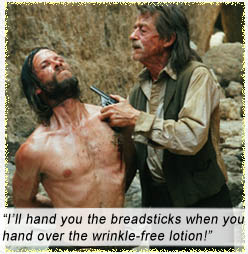 THE PROPOSITION is filth and dust and blood, punishing Outback heat bleeding off the screen; a land so untamed it spawns lawmen as sociopathic as the lawbreakers they pursue.Captain Stanley has the best intentions (“I will civilize this land”) but has been hardened by the vicissitudes of keeping order in this barren world far from Britain. (“Australia. What fresh hell is this?”) After capturing two of the three notorious Burns brothers, Charlie and Mikey, Stanley proposes to hang youngest brother Mikey come Christmas Day if Charlie has not yet killed his older brother, Arthur. Charlie reminds him he is only a copper, not a judge and jury, to which Stanley replies, “Clearly, Mr. Burns, I am what I wish to be.”

Arthur (foreboding Danny Huston) is the sadistic eldest brother singularly responsible for putting the “notorious” in Burns Brothers, so Captain Stanley proposes a pardon for Charlie and Mikey when Arthur is killed.

What no one counts on is the ruthlessness that comes at Charlie and Stanley from all sides: the insubordinate prison guards who disapprove of Stanley’s plan and who can’t stop thinking about rubbing their wonderful filth over Captain Stanley’s delicate wife (Emily Watson); Captain Stanley’s superior government official, sadistic Eden Fletcher (David Wenham, putting on the weaseliest voice he could possibly muster) who has Mikey flogged; bounty hunter Jellon Lamb (John Hurt, educated, articulate and crazy as the heat) who is also hunting Arthur; the aboriginals of this stolen land who pigstick Charlie in a shocking scene…

Then there is Arthur Burns himself, a poet savage, a lunatic genius, “a monster, an abomination,” whose credo of love and family are an insane irony when we learn of the family he recently raped and mass-murdered, the very reason for which Captain Stanley has set his own brother upon him.

Arthur seems to realize what a deviant he is when he carves a knife down a man’s chest, while asking brother Charlie, “Why can’t you ever just – stop me?”

The strange paradox of this movie is Arthur’s rightness in the way he perpetrates his wrongness. When his young crazy gang member asks Arthur the definition of “misanthrope,” their Aboriginal gang member answers and the youngster turns on him, “I didn’t ask you, you black bastard!” Hilarity. Arthur replies, “A misanthrope is someone who hates every other bastard.” Youngster: “Is that us?” Arthur: “Good lord, no! We’re a family.” Dark hilarity piled on dark hilarity.

Words cannot describe this particular visual feast, baked in the furnace of the great southern desert land; when Captain Stanley sits on his porch and gazes out at the expanse of dry flat earth haze, the heaviness of the air makes it hard to breathe.

Though everyone’s performance is superb, Ray Winstone floats miles above the cast for nuance; just the way he holds tears in his eyes in moments when moral ambiguity clouds all reason, is enough to put tears in yours.

And everyone gets to point a gun almost directly at the camera, arm ramrod straight, in hard closeup. We can see the director drooling over this angle.

Written by Nick Cave (who also composed the dirty violin soundtrack), directed by John Hillcoat like shade never existed, THE PROPOSITION is a good hard bushranger tale (“bushranger” is the Aussie version of the wild west “outlaw”), probably the first to draw you into the old world so fully with its attention to 1800s detail and its ochre cinematography, the accepted social injustices toward the blacks (Aboriginals), and avoiding the base romanticism of Ned Kelly movies (Australia’s most famous bushranger). What makes this film so immortal is that the words “outlaw” and “bushranger” are never mentioned – because by film’s end, it is impossible to distinguish who the outlaws are.