Small time crooks painted larger than the criminals in any given corporation. 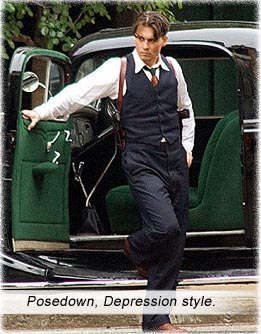 Set in the 1930’s Chicago crimewave during the Great Depression, movie opens with John Dillinger (Johnny Depp) breaking his pals out of jail (back in the day when a hoodlum could pose as a guard bringing in Dillinger, then both take the jail by storm – an idea obviously stolen from “a long time ago” when a wookiee infiltrated a Death Star prison the same way).

Melvin Purvis (Christian Bale) is the lawman assigned to bring down Dillinger, using all the new-fangled technological methods like telephones and cars. Billy Crudup is heinous warlock J. Edgar Hoover, who started the Federal Bureau of Investigation, so that police could chase bad guys like Dillinger across state lines. And so that he could jack off over the private lives of homosexuals.

From the book by Bryan Burrough, Public Enemies: America’s Greatest Crime Wave and the Birth of the FBI, 1933-34, directed by Michael Mann (LAST OF THE MOHICANS, THE INSIDER), PUBLIC ENEMIES dutifully goes through the paces of Dillinger’s bank robberies (back when it could be done with three men in hardguy overcoats, big hats, and a getaway car with lots of posing space on the running boards) and just as dutifully shows Purvis chasing Dillinger with his coterie of Keystone Cops. Neither Depp nor Bale create anything memorable with their characterizations, dialogue or posedowns on running boards.

PUBLIC ENEMIES makes the same mistake as AMERICAN GANGSTER – it makes the criminal too sexy to envision as an anti-social thug. Dillinger was notoriously popular and a charmer, but the man was also a sociopath. In a scene lifted from one of Dillinger’s real life breakouts, he uses a plastic gun and manhandles each successive guard past each gate in such a way that none of them discover his ruse until he raids the gun rack for real guns. A man with that kind of force of will and resolve would have something really dangerous inside him that would override his charm. To look upon a man like that in real life would be to fear him. Yet we movie maniacs only glean the guy we wanna party with. While J. Edgar Hoover declares Dillinger the very first Public Enemy #1, the rest of the world is declaring him The Sexiest Man Alive.

Dillinger’s heyday was in a transitional age, when physical bank robbers like himself were slowly being overtaken by virtual bank robbers. Phil D’Andrea plays a mob bookie whose telephone exchange brought in as much during a day as Dillinger could steal from one bank. Which should make one rethink the title of Burroughs’s book – America’s Greatest Crime Wave was, in fact, not during the early ’30s, it is now: AIG, Lehman Brothers, The Bush Klan and the Savings and Loan Scandal, et al…

Dillinger’s friends – scattered around the country in safe houses and brothels – deserted him as the heat was turned up under him. The world crept away from Dillinger in the space of a short lifetime.

Dillinger takes a floosie (Marion Cotillard) as his squeeze and she seems to relish the life of worry of a gangster’s moll. We never really connect with her until the film’s last moments when Dillinger sends his last words, “Bye bye, Blackbird.” Delivered by Stephen Lang, in a small role that packs that last emotional punch.

His final moments, Dillinger watches Clark Gable in MANHATTAN MELODRAMA delivering sage advice from the screen, “Die the way you lived – all of a sudden – don’t drag it out. Living like that doesn’t mean a thing.”

After spending 10 years in jail from age 19, it is a wonder how Dillinger’s rep grew so fast into the blaze of glory it would become. And he went out the same way he lived: sexy as Jack Sparrow.