Incredible movie of a non-credible story.

PUNCH-DRUNK LOVE is not a movie. It is a tonal poem. Writer-director Paul Thomas Anderson (MAGNOLIA, 1999) paints in dire hues, onerous sound and shifty-eyed desperation. And he makes a Man out of Adam Sandler – an achievement in itself. 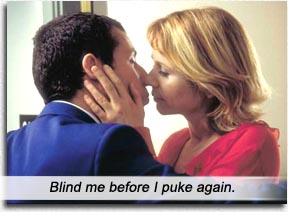 Sandler is Barry Egan, a businessman whose company makes novelty toiletries. He’s not all there. The accepted euphemism these days is Rain Man behavior, but Barry Egan is – like all Sandler’s previous characters – retarded (for once, not in the pejorative sense). But Anderson has plopped that well-worn Sandler shtick in the middle of real life, not a screwball comedy where everyone accommodates his idiocy. And this is how out-of-place it looks.

The uncomfortableness of Sandler’s character comes across immediately. Barry’s waffling, his darting eyes, his stiff interaction with people make us want to step from foot to foot in disturbed sympathy with the guy. He is a bachelor, almost by force, and doesn’t understand what women are for, but has a vague sense that he should be connecting with them.

Movie opens like a Charlie Kaufman sequence, with Barry (in an electric-blue suit that he never takes off for the movie’s duration) rescuing a harmonium dumped on the street outside his office. On the heels of that strange scene, a woman named Lena (Emily Watson) entrusts him with the keys to her car that she is dropping off at the garage next door which hasn’t opened yet.

Anderson directs these sequences with such an original eye, we cannot discern whether it is Anderson’s technique or Barry’s weird reactions to these events that is creating that palpable spring being wound tighter in our chests.

As soon as his work day starts, loud, intrusive soundtrack (original music by Jon Brion) accompanies Barry’s every move, from demonstrating toilet plungers to taking numerous phone calls from his seven sisters (led by Mary Lynn Rajskub) inviting him to a party that night.

At the party, we discover a little more about what made Barry Barry – his seven emasculating, belittling sisters couldn’t’ve been healthy (calling him “gayboy” gets their glass doors forcefully remodeled). Though he tries to stay insular and shut out those around him, his necessary interactions with “normal” society often causes mood swings, weeping and violent bursts of anger. He cuts coupons and has an obsession with accruing enough air miles (through buying pudding) to never have to pay for a flight.

Barry makes an attempt at phone sex, an aborted call that would come back to haunt him. (Brave scene, as we hear full credit card numbers and phone numbers stated. They are, of course, not real, but don’t have that sting of “5-5-5” Hollywood fakery.)

PUNCH-DRUNK LOVE is billed as a romance – and after being dragged through Barry’s horrid perception of life, we are at last reintroduced to Emily Watson as Lena, and the romance rises to its shaky feet – like a mucus-covered newborn giraffe about to fall over.

We can understand how any man would be attracted to the classy British cutie Lena, but throughout her courtship with Barry, we wonder what kind of dishrags, jujubes and bean-stems she has been dating to find this disturbed, clingy, erratic man attractive in any way, except for a quick physical fling. Sandler’s performance is mighty, it is saturated with comic pathos – that is not the problem; the problem is suspending our disbelief that this glowing woman and this dim bulb have any chemistry.

The incomparable Philip Seymour Hoffman is some kind of facilitator/pimp, associated with the phone-sex scam, who sends “four blond brothers” to extort Barry.

Not formulaic in the least, the movie takes sudden turns and asides and we are left on edge as to what might happen to these characters we have invested our time in, the disruptive soundtrack only adding to our discomfort. The fact there is a happy ending seems incidental.

When Barry is with Lena, the soundtrack at last lets up and flows Danube-like.

Barry’s clockspring anger comes in handy during a mean mongrel scene where he expressionlessly takes out the four extortion brothers, like a Seagal not a Sandler. To add final impact to this scene, when Barry gets back into his car, the camera is mounted on the door, and when he slams it closed, the camera jiggles and steadies itself immediately, pounding home an exclamation mark.

For Sandler, this role is the bridge that spirited him across the river of dullard roles (THE WEDDING SINGER, THE WATERBOY, LITTLE NICKY), to the dramatic thespian we could accept in SPANGLISH, THE LONGEST YARD and REIGN OVER ME.

The story is actually implausible and tiresome, but filmic raconteur Paul Thomas Anderson crafts PUNCH-DRUNK LOVE in such a compelling way that he not so much suspends our disbelief but leaves us open-mouthed at the way he doesn’t, and yet succeeds as a moviemaker and a master storyteller.