THE PURSUIT OF HAPPYNESS needs to take a Prozac. 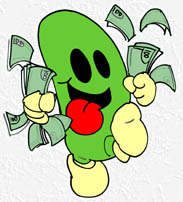 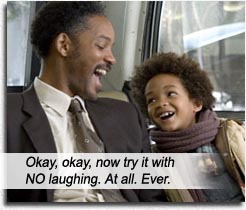 Relentlessly depressing, director Gabriele Muccino’s first English feature film is Inspired by a True Story – which only inspires nausea with their ubiquity these days – and though its intent is to be a “feel-good” movie, it goes awry in its execution, paying such sadistic detail to every mishap, misfortune and misstep of its hero that it loses all semblance of entertainment. (And why that annoying “y”? We find that there is nothing intriguing in the misspelling of “Happyness,” simply a reference to graffiti on a day care center wall.)

Will Smith trades his Actionman for an Everyman, playing Chris Gardner, a late-thirty-something in 1981 San Francisco, with a Bitching Wife and Convenient Kid. Gardner is a bone density scanner salesman – as hard to sell as they sound – he investing his life savings purchasing them on spec, only to have his prospective clients (hospitals) consider them unnecessary icing; hence, to pay the 3-month-late rent and offer his five-year-old son better opportunities, whilst trying to pay bills with the few-and-far sales of scanners (simultaneously his albatross and his bread), Gardner gambles on a long shot, a six-month non-paying broker’s internship which may lead to financial stability – if he is chosen over hundreds of more qualified applicants. A Rubik’s Cube comes to his rescue. True? Who knows – but it was fun to see that old demon puzzle resurrected.

Thandie Newton is Bitching Wife, almost a caricature, providing emotional baggage when necessary and excised when she might start convoluting the plot with realistic action or threatening Will Smith’s screen time. Smith’s real son, Jaden, is Convenient Kid, with nothing noteworthy to offer (except maybe his Boondocks hairdo), who only once acts like a real kid – when he irrationally screams to be let into a hotel room they’ve been evicted from; otherwise ambivalently following his father into destitution with nary a whimper for ice cream and dangerous toys. Dan Castellaneta is the intern trainer, not being very Homer Simpson about it.

Over the course of Gardner’s internship, he loses his wife, his car, his friends, his apartment, his shoe, and at various intervals, his scanners (for which he must pour on the Will Smith Sprint to recover them from thieving hippies – Smith spends so much time in full stride, it almost becomes The Pursuit of Bone Density Scanners); his one constant is his son, for whom he is enduring this hell. When is this guy going to catch a break?

Yet we are never allowed to consider that Gardner just might be irresponsible in pursuing a six-month dream which may end in failure through no fault of his own, instead of simply bellying up as a McDonalds cashier. You need to feed your son NOW, Horatio Alger! While pretending solvency to appear well-adjusted – at one point surrendering his last five bucks to a millionaire boss who forgot his wallet – Gardner and son spend the night in flophouses, homeless shelters and on the streets, at one point sleeping in a railway public toilet, leg propped against door to stop people entering. Smith’s acting takes us to this place, with such a traumatic look of dejection and loss and fear for his son’s wellbeing that the insistent knocking on the door becomes scarier than any axe-murderer or twenty-foot bug.

Apparently there’s a message to this onerous exercise: follow your dreams and don’t listen to anybody who says you can’t. In which ten billion Disney movies have we heard that before? Trouble is, we’ll never hear from the millions who actually go Gardner’s route and fail. That’s a reality too, more so than Gardner’s.

Anyone who has been in Gardner’s state of impoverishment would quickly notice how this movie conspicuously neglects one aspect of dire realism – at his lowest ebb, Gardner never once considers stealing, not even hooking a lone apple from a streetside fruit stand; his one act of depravity being stiffing a taxicab for the fare. When flensed of all humanity, the human animal will survive via any means possible, morals be damned. Or Gardner’s situation (as purveyed by this movie) could not have been as dire as it was painted.

And it wasn’t. This movie was “written by” Steve Conrad (THE WEATHER MAN, 2005). It is only “inspired by” a true story. The real Chris Gardner story will show that he worked as a research lab assistant, then actually doubled his salary when he started selling the medical equipment; that his internship actually paid $1,000 per month; that, though life on the streets was demeaning, there were friends and acquaintances that lent a hand up when needed. THE PURSUIT OF HAPPYNESS is a badly-made film of an inspiring story just waiting to be made into a formulaic film.

Smith’s occasional unnecessary voiceover is like some kind of perverse attempt at irony. When he’s running, he informs us, “This part of my life, I call ‘running'”; when he’s riding the bus, he cleverly intones, “This part of my life is called ‘riding the bus.'” It ain’t irony if it is what it is. His voiceover laments, “Maybe happiness is something that we can only pursue and never have.” “When I’d get an A on a test, I’d get this good feeling about all the things I could be – and I never became any of them.”

Welcome to the real world, Chris.

We are shown so much misery (Gardner has to sell his blood to pay for a bulb for his scanner, he spends a night in jail for parking tickets, after painting his apartment for free for his landlord, then having to attend his first broker interview in paint-smeared rags – and on it goes) that by the time the movie tries to perk us up with the mandatory upbeat ending, it comes too late and we don’t want to forgive it. Who can blame us?

A text screen informs us Gardner became a multi-millionaire, but this manipulative text is only inserted for the True Story value, and used as a technique to wrap the movie hastily. An example of Chris’ success should have been built into the movie – as payoff for OUR suffering – not thrown up as afterthought. Voiceover and screen text are generally regarded as the easy way around having to create visual story. PURSUIT makes this look all too obvious.

With his gamble paying off, Voiceover Gardner informs us that “this is called happiness.” So money DOES buy it…