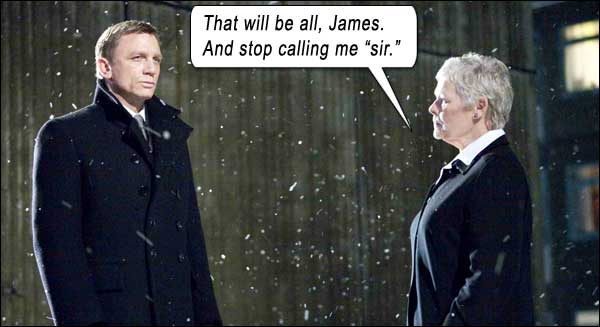 QUANTUM OF SOLACE, directed by Marc Foster like a speed freak, and edited by Matt Chesse and Richard Pearson like a chicken fight in a monkey house, makes THE BOURNE IDENTITY look like MY DINNER WITH ANDRE.

As I watched the opening car chase grind metal, and the subsequent foot chase beat streets through an Italian town during a horse race, one question kept surfacing: Did I accidentally walk into TRANSPORTER 3?

QUANTUM OF SOLACE exists only for its next popcorn chase sequence only to show off its next stunt, with editing that will maim your optic nerves. Your eyes will start hurting long before you realize there’s nothing onscreen worth watching.

But is it still Bond? Having recently re-acquainted myself with two of Pierce Brosnan’s outings (GOLDENEYE and TOMORROW NEVER DIES), I see that Brosnan (a perfect Bond, I might add) never colored so far outside the lines of the character that he became not just unrecognizable, but indistinguishable from the morass of other taut-buttocked man-toys glutting the action hero landscape. That’s the tragedy here – Craig could be Jason Statham or Clive Owen or Jet Li; the Bond franchise might have been resurrected/reimagined in CASINO ROYALE, but there is not enough “essence of Bond” left by venturing so far outside the box in QUANTUM.

There is still the suaveness, sure, but the infamous Bond gadgets? Not a trace, except maybe the soaring height of computer technology displayed by the whole MI6 organization. Aston Martin? Only a banged up version in the opening car chase. Flamboyant villain? Well, he’s indeterminately Euro with designs on absolute power. Ironic banter? Nope. Quips? Nope. Sex with leading lady? Nope – instead, a glorified extra. Even the catchphrase, “Bond. James Bond” is absent. And the laughable Bond death-traps where – like the 1960s Batman – he is left to die in some contraption with a countdown that allows him just enough time to find an improbable escape with no one watching? Bond actually turns the table on this one, leaving the villain in the desert with only a can of motor oil to sustain him.

Written by the talented Paul Haggis, the Evil Plot in this Bond film is congruent with today’s morally muddy politics, where a shady “green” entrepreneur, Gordon Greene (Mathieu Amalric), deals hand-in-glove with the CIA and the British government, who both admit, “if we didn’t do business with villains we wouldn’t be doing business at all.” Of course, Greene’s ultimate aim is power over others – in this case, monopolizing the water supply in Bolivia, using “environmentalism” as a cover.

For those not paying attention, there are the eye-straining fight scenes and chase scenes to keep you amused: car chase, boat chase, plane chase, moped chase, foot chase across rooftops (where’ve I seen that before? Oh yeh – the last Bond film!), wholesale destruction following in the wake of Bond and his pursuers. 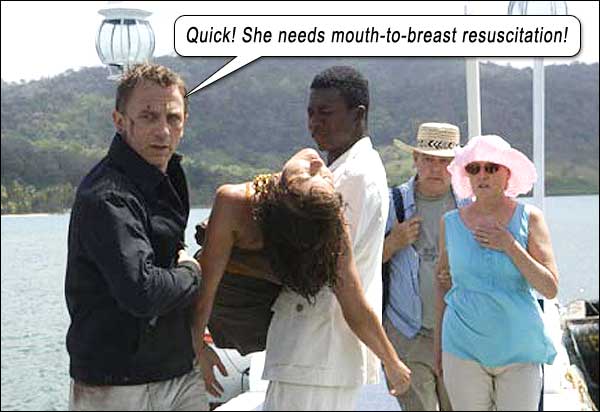 Meanwhile, that wrinkled old man in charge of MI6, Judi Dench, goes swishing about doubting Bond’s loyalties because he is mooning over a chick who got murdered in the last film. So Bond goes rogue long enough to plonk a newbie bimbo by the name of Strawberry Fields (Gemma Arterton), then finds her dead like the chick in GOLDFINGER, covered in oil instead of gold. (Black gold?, heh heh–Waitaminute! Even if you were dipped in crude oil like a shrimp cocktail, wouldn’t it just slide off? How does it cake her body like black syrup?)

And the leading lady – nay, Bond Girl – Olga Kurylenko, doesn’t even schtup Bond! Isn’t that the POINT of being a Bond Girl?! Detached to the point of boring, Kurylenko’s ice queen character is ironic, playing some kind of double-agent with a burn scar on her back that I couldn’t stop looking at, tooling about a searing desertscape, trapped in a hotel fire – yet generating not one iota of heat. Let’s face it: Bond’s universe is no place for a woman too independent. Our primal instincts felt the old magic when dippy Fields bantered with Bond, but that misogynistic fun was not to last. Excuse the pun, but – 18 million cracks, my arse!

Why does everyone moan about the title? Does anyone know what quantum means outside of physicists and Scott Bakula? A quantum is an “amount,” a discrete “packet” of something, especially used in physics to denote the smallest physical quantity that can exist independently. (From imdb: According to Henry Chancellor in his book James Bond – The Man and His World, “Quantum of Solace” relates to the necessary iota of emotion that is needed between lovers.)

Now tenuously link this with Bond seeking revenge for his last bébé and the villainous organization named Quantum. Thank the junkets we don’t have to view the film for this info, which takes us from Haiti, to Italy, Bolivia, Austria, London, Russia, and leaves us north of Eye-Strain.

Just like the last film, Bond’s healing abilities are like Wolverine: every little face cut – healed by the next scene. In CASINO ROYALE, he plonked Vesper Lynn mere days after his mandacious torture – can the franchise heal itself as quickly as Wolverine Bond’s ballsac?