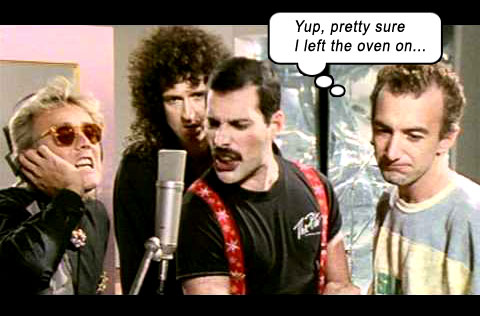 The Show Does Go On…

Classic Queen? Isn’t everything that Queen release automatically classic? How do you differentiate? Seems Hollywood Records don’t really care, as CLASSIC QUEEN, a 1992 VHS release, is a jumble of videos from many Queen eras, focusing heavily on their later period material.

Like the venality of a record company is any surprise. Godhead, icon and lead singer Freddie Mercury had died less than a year earlier and Hollywood were going to milk that teat dry. Obviously panicking that it would be the last time they could do so with Queen, as the band had dissolved after Freddie’s death and didn’t look like it was going to reform any time soon, even with the rumors of George Michael joining…

The opening sequence of the video is heartbreaking, as it shows behind-the-scenes footage of Queen making their last few videos with a rail-thin Freddie Mercury, while The Show Must Go On plays over this montage. It makes it all too obvious this is a “tribute” to Freddie, if not dedicated to his memory. Or at the least playing off his death to move product…

All that said, these Queen videos are indeed, classic, if not just jubilant celebrations of magnificent music. These brilliant songwriters and musicians never did change their lineup during their career, no matter Freddie’s assessment of the band dynamic being “shouting at each other like a bunch of old queens.” 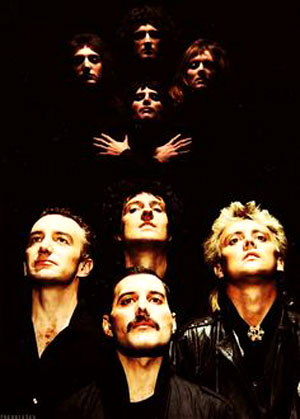 From the classic old school thrash of Stone Cold Crazy, to the operatic Bohemian Rhapsody (gunned back into the American charts via WAYNE’S WORLD), to the heart-rending HIGHLANDER songs (One Year Of Love, Who Wants To Live Forever; noticeably absent – Princes Of The Universe), to the massive crowd-pleaser Radio Ga Ga and raunchy rockers Tie Your Mother Down and Keep Yourself Alive. It’s an excellent shuffle for the new fan to discover many Queen periods.

Also included are songs that sadden us (I’m Going Slightly Mad, These Are The Days Of Our Lives, Headlong), not through the song’s construction or content, but because in these last of the Queen videos, we see an emaciated Freddie, stiff upper lip, giving it his last physical efforts to complete as much product as possible before his all-too-imminent death.

The Miracle features four young boys mimicking the band onstage with a full stage and lightshow; when the band eventually appear to take over, it’s the second coming.

One Vision plays off Queen’s own legacy, in reprising the iconic Bohemian Rhapsody visual of the band’s four heads in a diamond formation; we see the original Rhapsody shot of the four young gods, cross-faded to the older, wiser, greater gods of Now.

Presentation comes with a booklet listing each song, its writer(s), video director(s), and trivia about the videos. Fear not, new fans, they’re ALL classic.

Track Listing:
A Kind Of Magic
Bohemian Rhapsody
Under Pressure
Hammer To Fall
Stone Cold Crazy
One Year Of Love
Radio Ga Ga
I’m Going Slightly Mad
I Want It All
Tie Your Mother Down
The Miracle
These Are The Days Of Our Lives
One Vision
Keep Yourself Alive
Headlong
Who Wants To Live Forever
The Show Must Go On
God Save The Queen