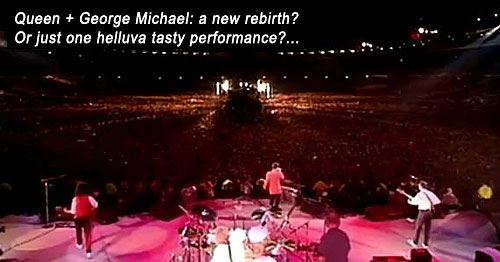 Compiled by The Torpedo Twins (Rudi Dolezal and Hannes Rossacher – DoRo Productions – who seem to have had their hands on the whole Queen video vault since the late ’80s), QUEEN: GREATEST FLIX III, is another excellent offering of various video clips from the diverse Queen library. (Suprisingly in 2015, it is still only available in VHS format, as opposed to GREATEST FLIX I and II, which have been transferred to DVD.)

The “+” sign is the Queen convention for denoting collaborations with other artists, so as well as classic Queen songs (from Freddie Mercury, Brian May, John Deacon and Roger Taylor), we also see a couple of those performances from the months after Freddie’s death, with other artists, as well as solo Freddie and solo Brian!

Under Pressure
What the hell is the “Rah Mix”? Apparently, it’s this cut-to-shreds version that stupidly repeats lines like a skipping rap record. Just give us the original version of Queen + David Bowie! DoRo have pieced together footage that make it look like Freddie is onstage with Bowie and Queen, taking great care with the sound synch. We appreciate the effort guys, we really do, but leave the dreadlocks at home next time. 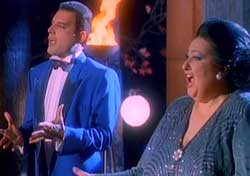 Too Much Love Will Kill You
“I’m just the pieces of the man I used to be / Too many bitter tears are raining down on me / I’m far away from home / and I’ve been facing this alone for much too long / I feel like no one ever told the truth to me / About growin’ up and what a struggle it would be / In my tangled state of mind, I’ve been lookin’ back to find where I went wrong…”

If there was ever a song that speaks to anyone who’s given their heart to anything – given that heart not just to a person, but a profession, an avocation, a career – too much love will kill you every time…

A song with versions of both Freddie and Brian performing lead vocals. Recorded in 1988 with Freddie’s lead vocals, but never included on its intended album The Miracle, May would later re-record it with his lead vocals for his brilliant solo album Back To The Light (1992). Freddie’s unreleased version is here. 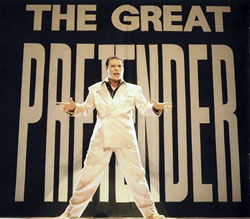 The Great Pretender
Freddie does The Platters. Over the poignant message that seems straight from lonely Freddie’s heart, the video itself is hilarious, as solo Freddie pays tribute to… himself! Various life-size cardboards of Freddie in character from past Queen videos, then mockup versions of the videos (It’s A Hard Life, I Want To Break Free, Bohemian Rhapsody, Crazy Little Thing Called Love), where he places his current self in the old clips. More effort than I’ve ever put into a cover tune.

Somebody To Love
Queen’s magnificent performance with George Michael at the Freddie Mercury Tribute at Wembley Stadium 1992. It felt so “right” that it started those rumors of George actually joining the band. And that touching moment that startled everyone, as the crowd sings Freddie’s descending cadenza a cappella. I’ve always loved that moment seeing that quick take of surprise/joy on Brian’s face.

Las Palabras De Amor (The Words Of Love)
Not something your usual rockers would fixate on, but me and my hooligan friends from school loved this touching song from the 1982 Hot Space album. Featuring Queen’s appearance on Top of the Pops, in this video we must just focus on the joy of seeing our heroes on TV, rather than the impossible fact that Brian is playing four instruments simultaneously: synthesizer, acoustic guitar, electric guitar and piano! 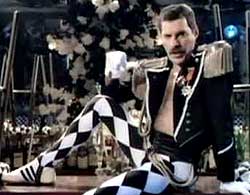 Living On My Own
More solo Freddie, in this 3rd single from his 1985 album, Mr. Bad Guy. The original album version of the song featured much more hilarious Freddie scat, real instruments, and an astonishing jazz piano interlude. The version here is the 1993 remix, a synthesizer-syrup thumper that totally embraces the gay dance club ethos. Everything is synth except the crystal-clear voice of Mr. Mercury. That’s what separates this thumpa-thumpa from run-of-the-mill electronica – that golden voice, with its catchy melody lines and decidedly rock edge. We wonder at the acceptance/tolerance of fans for versions such as this, because Queen is, in no uncertain terms, a rock band (in their early days, unabashedly heavy rock), and this was a departure not only in music style but in LIFE style. This music is relatable to a certain culture, and it’s not the culture of the headbangers and hard rockers.

Lyrically, a peek into Freddie’s soul, where he laments his loneliness, yet we see the video featuring one of his renowned perversus maximus parties (his 39th birthday bash in Munich). The tragedy is that Mercury was quite a lonely person even with his admittedly gregarious lifestyle. “I don’t have no time for no monkey business!” — Ba-toh!

Let Me Live | You Don’t Fool Me
Later period Queen songs that don’t really sound like Queen. Made even less impressive by their videos, that don’t feature the band, but arbitrary couples that are going through some kind of crisis which we care nothing about. 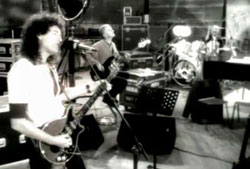 No One But You (Only The Good Die Young)
The jewel of this collection. A powerful tearjerker tribute to Freddie, written by Brian May, and performed by Queen (the retired John Deacon brought back to join his bandmates Roger and Brian). It’s been fourteen years since I first saw this video, yet I still weep inconsolably every time; for the genius lost, the music unfulfilled.

Brian sings one verse, Roger sings the next; the lyrics will break your heart. “…So we grace another table / And raise our glasses one more time / There’s a face at the window / And I ain’t never – never sayin’ goodbye / One by one / Only the good die young / They’re only flyin’ too close to the sun…”

Driven By You
Brian May’s solo afterburner, from Back To The Light. Composed for Ford car commercials! This video features the dynamo Cozy Powell (1947-1998) on drums in Brian’s live band.

The Show Must Go On
An unimpressive duet with Queen and an orchestra backing Elton John, who hasn’t had a voice for a long time. Nowhere nearing the poignancy or urgency that Freddie imbued this song (the last track on 1991’s Innuendo), Elton mumbles his way through his octave-lower register, and I think all that armwork and pacing is him trying to be soulful. A poor ending for a very good collection of videos.

“Driven By You” ♦ BRIAN MAY

Track Listing:
Under Pressure (+ David Bowie, Rah mix)
These Are The Days Of Our Lives
Princes Of The Universe
Barcelona (Freddie Mercury, Montserrat Caballé)
Too Much Love Will Kill You
Somebody To Love (+ George Michael)
The Great Pretender (Freddie Mercury)
Heaven For Everyone
Las Palabras De Amor (The Words Of Love)
Let Me Live
Living On My Own (Freddie Mercury)
You Don’t Fool Me
Driven By You (Brian May)
No One But You (Only The Good Die Young)
The Show Must Go On (+ Elton John)
Included: a booklet listing each song, its writer(s), video director(s), and trivia about the videos.