SexyRegal is the new Streep.

Regal AND sexy. Only Helen Mirren could pull that off… 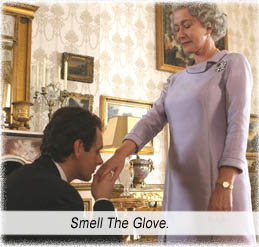 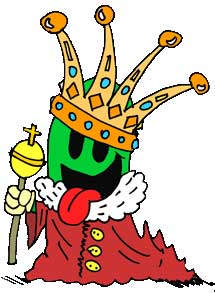 Mirren is THE QUEEN. Inhabiting the role of Elizabeth II like she was born into the English monarchy, giving the old biddy some reg’lr ole toughness, independence and spunk, at one point reminding her aides that she was a mechanic during The War.

THE QUEEN is not a biography of Her Majesty Queen Elizabeth II, it merely covers a short period of her life in the aftermath of the paparazzi-induced death of Diana Spencer, Princess of Wales. The Queen’s protocol reaction and the public’s kneejerk perception of the Royal Family makes for an interesting well-acted and directed couple of hours.

Movie opens with the election of Tony Blair (Michael Sheen) as Prime Minister of England, and the death of Diana (artfully done in swift shots interspersed with real footage). Blair is made to look like a strong, acute leader; the only head of state who discerned which way the populist wind was blowing. (Of course, this was before he became Bush’s bumboy in 2002, when he failed miserably on predicting the gunmetal winds).

Time and again, Blair would try to advise Elizabeth to make a public statement of grief over Diana’s death. But the Royal “we,” supported by imperious husband Prince Philip (James Cromwell) instead turned to protocol, insisting Diana was no longer a member of the royals (which was correct) and so deserved no public display of royal commiseration.

Even as the Queen’s British approval ratings plummet, she continues to insist she knows the tenor of “her people.” Yet how could she, being holed up since her twenties in that gilded cage?

Director Stephen Frears and writer Peter Morgan walk a delicate tightrope with the Queen’s character; though she comes off as snooty in dismissing Blair, she retains a fragile humanity, which I credit to Mirren’s performance. I’d stake my life that the actual Queen – after so many insular decades behind those lascivious, hedonistic palace walls – has no clue what humanity IS anymore.

As much of the action takes place within the palace, I’m intrigued as to how many details of the Queen’s bedchambers and private quarters they got right. Every time a movie is made on an Oval Office set, the filmmakers crow about the intricate detail they put into it (because Americans are allowed to take tours through the President’s domicile and office), but who’s going to know if the halls of Buckingham Palace are authentic, except the few hundred people who work within them (and they’re not talking for fear of being beheaded)?

Throughout the movie, Mirren is suitably regal and British, yet when she goes on national TV for the Diana statement, suddenly we hear her adopt that super-posh “Queen voice” – up to this point, she needed to do nothing else to secure the Academy Award she would win (2007, Best Actress, Leading Role), but as soon as she dropped that Queen voice on us – it was all over. Everyone else could tear up their acceptance speeches.

SexyRegal was the new Streep.