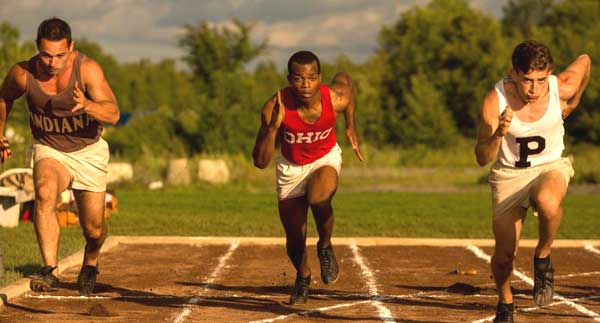 Hulk and Plastic Man regret going up against the Flash.

Isn’t there a punchline that goes, “faster than Jesse Owens at a Klan rally”? And there’s BLAZING SADDLES, when African-American Cleavon Little, discovered hiding under a klansman hood declares, “And now for my next impression: Jesse Owens!” – and runs like the devil. Point being: African-American Olympic sprinter Jesse Owens has entered Western vernacular for his race-ISM, and is also inextricably linked with racism.

So the title of the movie RACE is double entendre impact for the exact same reasons. It’s about Jesse Owens. And his races. And his race.

RACE is not a political movie trying to re-litigate the sins of the 1936 world – and there were many, on both sides of the Atlantic. Movie is a grand tribute to the gifted young runner from Chicago, Jesse Owens, who had to field the sociopolitical climate of his day and yet pull out breathtaking feats of athleticism.

In the 1936 Berlin Olympics (known as “Hitler’s Olympics”) Owens would win four gold medals, for the 100 meters, 200 meters, Long Jump, and 4 x 100 meter relay. It is reported Chancellor Adolph Hitler, who viewed the Games as an opportunity to promote his Nazi ideology, refused to meet with Owens or shake his hand. And American President Franklin Delano Roosevelt – who benefitted from a black man stepping on Hitler’s “Aryan Supremacy” – did the same. Ironic, considering the U.S. sent an envoy from the American Olympic Committee to Germany to forcefully request that the Games allow the participation of blacks and Jews! Hypocrisy much? 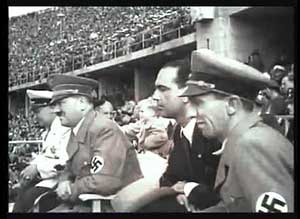 RACE adopts the anti-Hitler stance, showing U.S. envoy Armitage taking Jesse to meet Hitler in his booth, only to be told by Goebbels, “Do you think the Chancellor wants to be in a photo shaking hands with that thing?” Outrage. But is it true?

The U.S. adopted this anti-German propaganda because – well, that whole WWII thing – but in 1936, there are other accounts, some by Owens himself that claim Hitler was at least cordial towards him, and was in fact, rushed out to keep another appointment, rather than actively “snubbing” Owens. Some claim FDR’s snub was much more potent than Hitler’s because there is no doubt surrounding it.

We might assume Hitler was a petulant swine, but was there any excuse for the American President to demonstrate such cowardice and racism?

Stephan James is Jesse Owens, the first of his family to go to college, attending Ohio State for the racing opportunities, training under coach Snyder (Jason Sudeikis, as serious as a muscle cramp, eschewing his comic flair for a pragmatic realist for whom winning is everything). Aware of the open racism on campus (“blacks don’t shower here”), Snyder, for whom race is a non-issue, even suggests to Jesse, “Maybe you could’ve gone to some place … more progressive.”

At their first meeting, Jesse averts his eyes downwards, almost like an introvert. But it’s not because he’s shy. It’s because in the 1930s a black man had to act subservient to a white man if he didn’t want to get in trouble. It brings tears to our eyes to even realize that Jesse has to be instructed by Snyder, “You can sit down.” And Snyder’s curt directive – going against popular consensus, we would discover – “You should look a man in the eye when he’s speaking to you.” 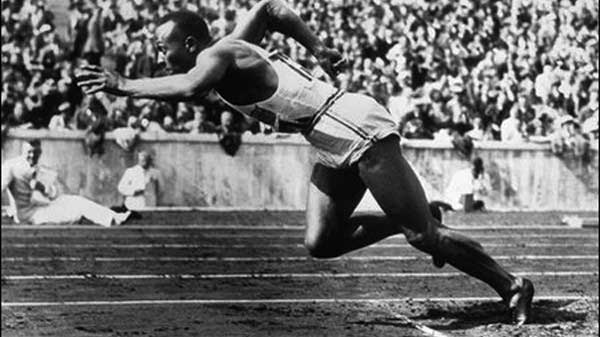 One look at this guy’s form and I’d wear brown pants too!

Jesse’s father is close-mouthed and pissed off constantly, for reasons that folks who have never experienced racism will never comprehend. He knows the denigration his son is going to suffer. While mother does the Hollywood Exposition Shuffle: “I thought I was gonna lose you at five, but God made you for a reason; you’ve got great things in your future.” I’m 100-percent certain these lines never, ever issued from mama’s mouth. Shanice Banton is Ruth, a girl whom Jesse has a child with, and there is some boring time given to the B-story of wooing her.

William Hurt is on the Olympic Committee; Jeremy Irons is Avery Brundage, the U.S. envoy who meets with Josef Goebbels (West Berliner Barnaby Metschurat in a chilling, dead-eyed performance that would freeze a vampire’s undead blood); Carice van Houten is German filmmaker Leni Riefenstahl, a ballsy female director intent on capturing the historic Games for posterity, even after Minister for Propaganda Goebbels shuts down her crew after Owens’ third victory – Leni dredges them back into operation against Goebbels’ vampire-killing scowl.

Up against the racism in his own country and the racist fascism in another, Jesse’s moral struggle would be a damned-if-you-do/damned-if-you-don’t situation, where the leaders of the black community (the new org known as NAACP) urge him to boycott the games to make a statement. The thinking: if Americans attend, they are normalizing Hitler’s regime. While others remind Jesse that if he doesn’t attend, his voice, his talent, would never be heard at all. No one hears a “statement” made through absence. His presence and his wins would “stick it up Hitler’s ass!”

The most poignant moment is when German long jumper and European record holder Carl “Luz” Long (David Kross) helps Jesse find a mark to make a legal jump. And Jesse beats him. To Carl’s joy as well. No better testament to a sportsman’s spirit than to be happy when beaten by a man at his best. Luz is probably the only true German friend Jesse would make. 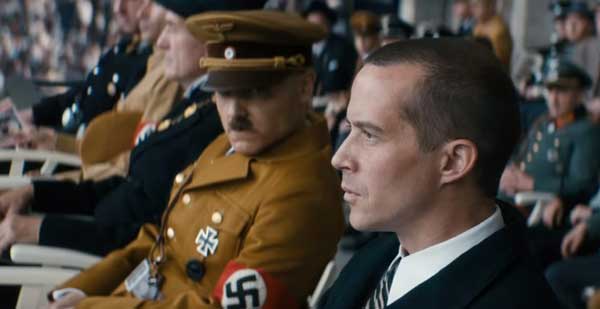 Adolph Hitler sees how Americans treat their blacks and gets his ideas for war crimes.

RACE is set in a time when “negro” was the preferred nomenclature and “nigger” was openly spat in public without fear of recrimination, and when the word “Nazi” didn’t carry the horrific baggage it does today. There are two stories running congruently – that of the 1936 Olympics at ground level, following the athletes and their training, trials and triumphs; and at the administration level where the politicians bullshitted and the Olympic committee fumfahed.

The races are directed and edited with an air of excitement and suspense, even though we know going in that Owens runs down the competition like a smooth criminal cheetah. His first 100 meter Olympic final is an amazing piece of filmmaking, an almost-unbroken take from the moment Jesse walks into the arena (amidst a stadium chanting Sieg Heil! to the Fuhrer), to the ribbon, ten short seconds away.

The period is well represented visually, and we must remember it is before WWII, so there is no PRIVATE RYAN sheen to the proceedings, although we do see the first signs of the new world disorder, with quick shots of people being manhandled into trucks. But is this any worse than the American disorder? In the final scene, Jesse and his wife are refused entry to his own gala honoring his Olympic glory, and must use the back entrance with the other slaves— I mean, “hired help.”

He was the Usain Bolt of his day. He was the fastest man in the world. And, by the way, what’s the difference between Jesse Owens and Adolph Hitler?
A: Jesse Owens can finish a race.

100m sprint (movie scene, unbroken take from entering the stadium to the start of the race)