Blood and Thunder or Thud and Blunder? 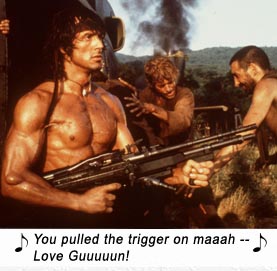 Sylvester Stallone returns as Johnny Rambo, the ex-Special Forces operative who tore up Teasletown in FIRST BLOOD, and was jailed for raping the English language in the closing monologue. Now he’s doing time on a chain gang and his melodramatic commanding officer Colonel Trautman (still Richard Crenna, still embarrassingly overacting) appears within ten seconds of the opening credits to spring Rambo and offer him a mission that will guarantee he keeps his shirt off.

At the army base, Rambo immediately meets Martin Kove as Ericson (who has obviously moved his Cobra Dojo to where the action is), and lantern-jawed government a-hole Murdock (Charles Napier, who tries to keep up with Richard Crenna’s overacting and fails).

The mission implausible: sneak into Viet Nam to discern whether there are still POWs in prison camps, and take photos as proof. Well, Rambo was never very good at photography and he didn’t even know the meaning of the word ‘discern,’ so he opts to kill everyone instead, with his giant love-gun, warhead-tipped arrows and Pretty Orange Explosions.

Rambo asks Trautman, “Do we get to win this time?” Sure, write it into the script that you blow up a tiny bamboo prison camp and we’ll rewrite the history books that we won Viet Nam rather than ran from it like girlies. (Script written by Stallone and James Cameron – how could there NOT be Pretty Orange Explosions?)

Rambo is aided in the jungle by pretty young Thai girl Co (Julia Nickson), whose broken English is as embarrassing as the prosaic plot. Co almost becomes a love interest for the war-addled Rambo. He opens up to her, “To survive a war, you gotta become war.” Uh, how about trying, “Your dress looks nice,” first? Still, that’s the closest Rambo gets to the truth of his id. It’s right there in that line – he’s not a savory character, he’s a war machine. And that’s a Bad Thing, right? But we blinded ourselves to it because we all wanted to BE Rambo or DO Rambo. And we had to convince ourselves that the Hero is a “good guy.”

Rambo also tells Co, “I’m expendable,” which was a tragic shoulder shrug back then, but in 2010, he would adopt that title for his high octane, shoot-em-up, sock-em-down adventure man-franchise.

The crooked American government is only staging Rambo’s photo-op mission for political reasons (and to see Rambo get his shirt off), so after Rambo actually rescues a scurvy POW as proof (when he should have only been taking pictures — but there was nowhere to carry his camera on all those muscles!), Murdock orders the rescue chopper to leave Rambo stranded. And Rambo becomes a part of the Viet Cong prisoner tapestry. Well, it sounds more romantic than it is: being crucified on a cattle yoke, dangling in a pit of slime covered in leeches. But that’s okay – if what Trautman says is true, in that melodramatic yawl: “What you call hell, he calls home.” Oh, so Rambo might as well be on his couch in a Snuggie watching TV with a cold one.

Then Rambo meets the Russians who run Viet Nam, led by Steven Berkoff (whose big boil in the middle of his forehead caused Eddie Murphy such agita in BEVERLY HILLS COP). They torture him on an electric mattress, which allows much opportunity for body-oiled posedowns. Cue bad-assery and shirt-offery on Rambo’s part, and the infamous revenge line to Murdock on the radio, who is sweating into his knickers: “Murdock, I’m coming to get you!…” Cue lightning and thunder. No, literally; it’s so funny when it happens that we forget to laugh. Later, an even funnier part when Rambo executes a full dolphin leap out of a river to grab a hovering helicopter.

So the plot: Rambo goes in, gets captured, escapes, rescues prisoners, kills everything else. No shirt. Lots of body oil. The flow chart then calls for the climactic shoot-em-up, so out of nowhere, here comes a giant helicopter gunship to pursue Rambo’s Huey with the escaped POWs. Where it comes from, no one knows, just that we need a big dinosaur-type thing for the big finale…

Rambo walks off into the sunset with Trautman, whom we suspect is not wearing pants, as he tries hard not to look at Rambo’s shaved chest. Director George P. Cosmatos knew that the simple plot wasn’t embarrassing enough, and wanted to send us on our civilian way with one last cringe, so Rambo takes a big breath and gives Trautman a wordy monologue over what he wants from life, ending with, ” I want… our country to love US… as much as WE… love IT!”

And then they kiss. The End. At least, I think they did – I couldn’t see through all the patriotic tears falling onto my love gun.