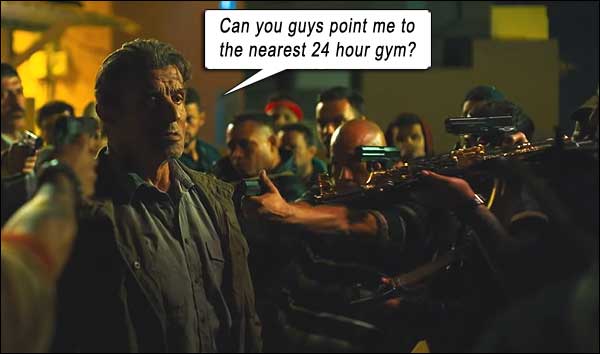 Going out with a hammer, not a whimper…

Mexican pimps. Rambo kill. The End. When distilled down to its essence, RAMBO: LAST BLOOD is a revenge movie, with creative kills bordering on gore-porn and Sylvester Stallone in the titular role bordering on Rambostein’s Monster.

I guess we can’t fault a Rambo movie for being a quintessential Rambo movie. If we’re looking for something more introspective and existential, maybe we should be watching THE ART OF RACING IN THE RAIN. Rambo’s very existence is based on NOT over-thinking, but acting on instinct; he is our id personified. Many beloved filmic characters start simple and end deep, i.e. Terminator, Iron Man, Wolverine – hell, even Rocky Balboa, Stallone’s other dambuster, had his existential moment in ROCKY BALBOA (2006) – so we can’t help but yearn for something a little deeper than revenge-gore in what we know is this final installment to a cinematic legacy.

Co-writers Sylvester Stallone and Matthew Cirulnick basically re-tool a trusty Rambo plotline of kidnap and rescue (which, to be fair, is a trope as old as the first cavewoman to be abducted by trogs from the next valley, and her Bigdikapithecus mate pursuing her abductors with the jawbone of a Smilodon to get her back). It works, because the production values are astonishing, and the performances are above average.

The kidnapped person here is a physical and emotional construct from scratch: she’s teen Gabrielle (Yvette Monreal) who calls Rambo “Uncle John,” whose mother is dead, and whose father is a deadbeat that Rambo saved her from, raising her from a child. It’s funny because we know Rambo never raised no kids, yet here, in quick backstory-out-of-nowhere, we see middle-background pictures of him interacting with Gabrielle’s family for the last 16 years at least… Okay, we’ll come along for this Last Ride…

Rambo and Gabrielle live on his isolated horse farm with Mexican housekeeper Maria (Adriana Barraza). He likes to chill in his series of miles-long interlocking tunnels under his farm (what the–?), which he excavated himself, of course, where he has cinematic flashbacks (because there is no other way to display his past prowess as a Black Ops soldier), outfitted with enough military weaponry to take on Dumbo Donald’s tinpot wannabe dictator army when they finish shredding the Constitution and try to illegally build a wall across his Arizona property.

The amusing thing is, unless you know Rambo’s reputation, you would be quite justified in asking yourself: why has this septuagenarian got an underground arsenal? That’s the overarching incongruity in this Rambo installment – we the audience know Rambo because the character has insinuated itself into world culture (like Jesus or Chewbacca), but no one in the movie is aware they are dealing with a Black Ops ticking time bomb. In every other Rambo movie, his reputation is on full display to the other characters through his actions and résumé. But to Gabrielle, he is a paunchy old guardian, to be appreciated yet disobeyed; to the pimps, he is a slurring concerned father, to be beaten and left for dead. 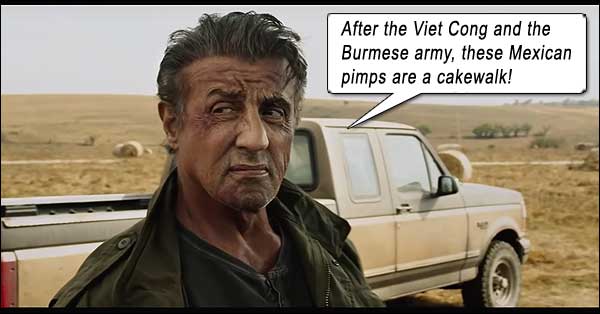 Rambo tells Gabrielle he “keeps a lid on it” – “it” being his warlike nature. But Gabrielle has never seen a Rambo movie; what’s “it” to her? Nothing. But here on the other side of the screen, we know Rambo is damaged goods. We felt his tragedy when he lamented in RAMBO: FIRST BLOOD PART II (1985): “To survive a war, you gotta become war!” but by 2008’s RAMBO, he had embraced his demons wholly, “War is in your blood. Don’t fight it.” So he’s really telling Gabrielle about the lid for our sake: to reiterate he’s a baaaad boy, and raising this child is his redemption–

Instead of following her plans to go to college, Gabrielle, with the help of Gizelle (Fenessa Pineda), a Mexican chola friend, locates her estranged father in Mexico, and runs away to find closure with him. Rambo warns her: “Nothing good is out there. He’s a bad man!” Let’s face it, Rambo knows how bad men can be, because he is one of them.

A couple hours drive, Gabrielle is in the stink of Mexico; portrayed as filthy and blasted as I always imagine it to be… Mexican government: Is this how you want your country displayed? Do you refrain from speaking out against movies that portray your country as a shithole – because it’s TRUE?

Gabrielle finds out the hard way that Rambo was right, as her father – in an incredible turn – snipes at her: “One day I looked at your mother and you, and realized you meant nothing to me. Then she died and left me with a baby I didn’t want!”… Robs us of breath harder and heavier than any Rambo film.

Gizelle takes Gabrielle to a club to drown her sorrows – and the next thing we know, Rambo is surveilling a prostitute kidnapping cartel in Mexico, tailing Gabrielle’s abductors. And if you can’t figure out who’s going to get their brains splattered against the wall, you haven’t been paying attention the last 37 years. This may be the fifth entry in the RAMBO franchise, but it’s familiar in all those ways we know so pain. To make a bad guy talk, Rambo digs his fingers into the flesh of the man’s lower neck and breaks his clavicle out of his body!!

Say what you want about the messages in Rambo movies, one lesson comes across loud and screaming clear: the only way to beat violence – is with violence.

Yet Stallone does give us a small taste of existential crisis, as Rambo is beaten savagely by the cartel, led by the Martinez brothers (Sergio Peris-Mencheta and Óscar Jaenada).  Reminiscent of Clint Eastwood’s beating in FISTFUL OF DOLLARS, the brutal, graphic scene shows a powerful icon brought low, in order to make his rise all the more Phoenix. Pulped and puffy-eyed, Stallone looks more than ever like a cross between Rocky and Frankenstein’s blobster at this stage. He is rescued by a journalist tailing the cartel (Paz Vega as Carmen, so attractive even though unadorned by makeup, she looks like either a transsexual non-binary from 2019, or an androgynous rockstar from 1973.)

After his (lightning) recovery, Rambo entreats Carmen to help him, and once again, we don’t know how people just take his word for it that he can take down the cartel, because she just rescued this broken 70-year-old man from dying in the street; how can she truly believe he is the savior they’re all looking for?

RAMBO: LAST BLOOD is derivative, drawing its initial premise from RAMBO 4 (woman going against Rambo’s warning into a dangerous place, from where Rambo must rescue her), and then hitting the safe beats of every movie where the hunted becomes the hunter: CHATO’S LAND (1972), FIRST BLOOD (1982), and, to the amusement of many, HOME ALONE (1990).

Rambo, utilizing a hammer to its fullest home improvement potential, rescues Gabrielle, beaten, drugged, raped and ragged. But it’s an unforgiving world. She doesn’t live long enough to realize how big of a mistake she made in going against Rambo’s warnings.

(And can you really just bury someone on your farm? With no legal paperwork or murder inquiry?)

The Martinez brothers cut their losses and do not try to get Gabrielle back, or go after her rescuer, because, they calculate correctly, it is not financially viable to pursue them – unlike so many movies where protagonists are pursued against all financial sense (CROCODILE DUNDEE II, MAZE RUNNER: THE SCORCH TRIALS, ROAD WARRIOR). And that might have been the end of it – had Gabrielle not died. Her death spurs Rambo to pure, seething, financially-unviable revenge.

Remember the good old days, when his shirt would be off for a scene like this?

Directed by Adrian Grunberg (who directed GET THE GRINGO, the enjoyable Mel Gibson toss-off when he was still in Hollywood exile), LAST BLOOD is the second production for Balboa Productions (the first being the 2019 Korean production, THE GANGSTER, THE COP, THE DEVIL). If you know what to expect from a Rambo movie – and seriously, who doesn’t? – it’s a ferocious thrill ride, Rambo having matured into a harder, heavier, bitter juggernaut, the violence savage and visceral and brilliantly staged. Although…

… there’s something strange about Rambo’s kills here. Yes, they are the most sadistic and bloodthirsty torture devices Rambo has ever deployed: spikes through the torso, explosives tearing off skulls, arms shredded, legs lopped off, feet flattened… yet every time someone is impaled in one of Rambo’s barbaric traps and screaming, Rambo is somehow always popping up to shoot them dead quickly. Now I’m wondering: is that a tactical move, to stop the noise? Because if he left them dangling or pinned, the tunnels would be a cacophony of screams. Or is it a Gutless MPAA thing – to put the baddies out of their misery so it doesn’t seem like Rambo is putting them through needless torture?

Rambo pins the last remaining Martinez against his barn wall, strides toward him, unsheathing his knife like a Bigdikapithecus. Even in this last satisfactory moment, I am disappointed that there is truly no “Who do you think I am?” moment; the “Do you know who you’re fucking with?” moment, where the baddie realizes – it’s Johnny Rambo! [lightning thunder] To Martinez, Rambo remains some arbitrary guy with mad killing skillz. During the raid, I couldn’t understand why Martinez’s men kept coming forward, when one after the other kept going down in a fashion that was obviously planned and executed with precision timing; they all still believed they were hunting simply a wronged father, not a seasoned professional assassin.

As the sun sets on Rambo’s decimated farm, the outro titles play an elegiac montage from all the Rambo movies, as Rambo’s baritone rasps about everyone he’s loved now dead. And seeing Stallone in maximum form in those old clips not only brings a tear for glory days, but brings home the fact that everyone we love – all our heroes – are dying. And Stallone did the right thing in going out with a bang, like the sound of a breaking clavicle.