He’s a Fighter, Not a Lover.

Remember when we were kids and the image of a sixty-year-old man was a white-haired fogey with a cane and wobbling knees, using an ear-trumpet and calling everyone “sonny”? 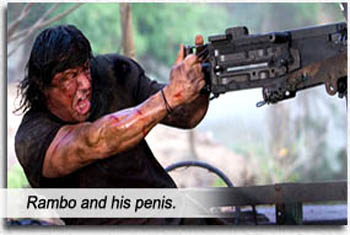 Sylvester Stallone is 62 years old. Black hair below the collar, stampedes like a buffalo, fires a 120-pound 50-calibre machine-gun with the kick of a Mack truck – and built like a brick shithouse freight train.

Bemusing to think that this symbol of virile youth, synonymous with bringing down the thunder on the establishment, is now an elder statesman telling us “nothing does change.”

John Rambo is eking out a quiet life trapping snakes in Thailand when stupid white missionaries (led by Paul Schulze and Julie Benz) cajole him into boating them upriver into strife-torn Burma. It is quite obvious Rambo is convinced into this deluded venture by the blondness of Benz, but in his stunted emotional state, cannot express it in any way other than to FIGHT for her. Schulze asks her why she keeps talking to him. Well, maybe cos he’s built like a brick shithouse and can do her for hours, unlike you, you Missionary-Position Missionary.

Against Rambo’s advice, they go, of course. Imprisoned by Burmese military – of course. Guess who comes to the rescue? Of course.

Plot is as simple and illogical as the RAMBO oeuvre we’ve come to love and hate, but there is a disturbing added element to the 2000’s Johnny Rambo. 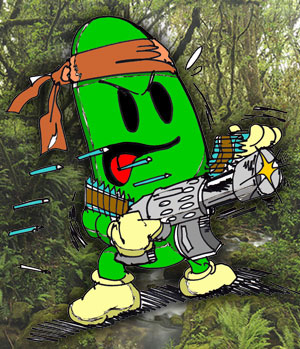 Rambo, instead of being recalcitrant about his SAS killing prowess (as he was in RAMBO: FIRST BLOOD PART II and RAMBO III) now embraces it and admits to himself he enjoys being a war machine. While his initial hesitance to take the missionaries into hell prompts a belief that Poor Peacenik Rambo has been dragged into someone else’s war yet again, Rambo actually narrates that his nature is to seek out conflict because that is how he is built; to seek a Warrior’s death – as opposed to fading far from the fray. Due to our inculcation that Rambo is a “hero” and heroes shouldn’t enjoy war, it takes a long time to sink in that this Rambo fella is actually as shallow as we’ve always joked about him over the last 25 years!

It’s safe to say we all know Rambo, if not the man himself, then at least the character, the icon; as a touchstone, a cultural reference that has insinuated itself into our vernacular. It is hard to believe that before 1982’s FIRST BLOOD, there must have been another reference for uber-tough guys who could burn you down in a heartbeat and take on anyone or anything; maybe it was Tarzan or Samson – whoever it was, that persona was effectively sidelined by Rambo, for the simple fact that media promulgation at this point in history is such a gluttonous bloat.

But the “ideal” of Rambo has always been someone who doesn’t take shit (as in FIRST BLOOD), or someone who, against all odds, pulls through with his manly might (RAMBO: FIRST BLOOD PART II), or just plain body oil extravaganza (RAMBO III). But in RAMBO, we find out he is not a nice person. A woman’s pink bits might twitch for this man, but only as a locomotive love-machine for a one-night slam, not as someone to “love” or raise kids with, or even as a provider or boyfriend showpiece. He is pure – but that is not a compliment. After all those years in obscure jungles trying to “find himself,” in RAMBO, he does – the “ideal” of Rambo is revealed as pure war and death.

As writer-director, Mr. Stallone is fully to blame for the absolutely nonsensical plot: he pounds it into us how ruthless, godless and inhumane the Burma military is; scenes of military grunts sadistically making prisoners run across rice paddies where they’ve arbitrarily thrown mines, betting on who will make it across or be blown to bits; we witness a commander (Maung Maung Khin – a real-life survivor of the Burmese military) slaughtering a village, “If you ask the Rebels for help, I will cut out your tongues! If you go against me, I will feed you your intestines!”; he shows us brutal beheadings and arm-loppings and rapes… and then expects us to swallow that this same bloodthirsty military would decimate a village, killing even the dogs – and let all the White American Missionaries live, taking them prisoner – even though none of them is important in the LEAST politically, diplomatically or morally. And then to further insult us when Rambo liberates the white prisoners and the whole Burmese army chases them for the purpose of… uh, recapturing them and penning them next to pigs again, I guess – (?) We can rest assured not one of the guys playing Burmese officers went up to director Stallone and said, “Uh, Mr. Lambo, what my motivation?”

Among the White Americans is Sarah (Benz), a clean-smelling, smooth, flat-bellied, luscious blond. If we – as normal red-blooded guys, leading normal sex lives with girlfriends, wives, mistresses and the odd groupie – are still thinking of touching the White Chick in all her woman-places, think of what should be going through the heads of the depraved Burmese army swine. Hardened killer soldiers (who rape and kill their countryfolk as easy as breathing) confronted with a HOT BLONDE never lay a finger on her for all the days she is in her pig-pen prison!

You lost me at the corner of Amish and Eunuch, when you played the White Hollywood Actor card.

The commander constantly paces and gives Sarah contemptuous meaningful looks through the bamboo bars – but what is he doing? Working up the nerve to ask her for a date? She is not a dignitary or diplomat; not the least bit important – she is a missionary, an expendable nobody, so there is absolutely no tactical, political or moral reason not to rape her continually until the end credits roll. This negligence is almost as infuriating as the film-makers’ faux-concern over Burma’s real life genocide plight.

So Rambo and a clutch of mercenaries infiltrate the jungle prison and liberate ALL the White prisoners and as many Burmese women as they can (who are busy getting gang-raped – unlike their White American counterpart).

Somewhere along the way, Rambo gets to philosophize, “Live for nothing or die for something.” Embarrassed? I know I am. Ironic that these words come from such a self-admitted misanthrope, who proves his inherent distaste for Mankind in a climactic shootout scene that makes THE WILD BUNCH look like HIGH SCHOOL MUSICAL.

When Rambo plants a claymore mine on a defunct WWII Tall Boy bomb, the explosion is like Oppenheimer’s atomic mushroom cloud – Rambo had reached his apex; as Robert Oppenheimer said when he saw his first atomic bomb tested: “Now I am become Death, the Destroyer of Worlds.” (The test director replied to Oppenheimer’s poetic citing of the Bhagavad Gita with a more realistic claim: “Now we are all sons of bitches.”)

It is amazing how much startling violence this movie is chocked with and still gets away with an R rating. The film-makers were actually shocked that they avoided an NC-17 with such realistic gore, but they forget the key ingredient in the MPAA’s hypocritical criteria: you can have as much graphic murder as you want – let’s see those shredded skulls and shinbones sticking out of flesh and heads on spikes – just don’t touch the White Woman’s Vagina or we’ll ban you sick horrible perverts!

On the DVD Extras, Stallone regrets deleting a “preachy” scene: in that direct soldier’s way of mumbling half-intelligibly, he speaks Truth: “War is in this country’s blood and peace is an accident… but it’s okay cos you’re killing for your country. But it ain’t your country who’s asking – it’s the guys up top who want it. Old men start it. Young men fight it. Nobody wins. Everybody in the middle dies…”

All the Missionaries’ platitudes about helping people and believing in something other than yourself were all proven horseshit, as their presence did NOT help, but only exacerbated the military’s anger, spurring them into a fiercer rage to go Sam Peckinpah on them. When Rambo warned them they wouldn’t change anything – he was right! If they had kept their noses out of Burma (or Myanmar, as the junta have renamed it), LESS people would have died.

Just because these Missionaries have “good intentions” doesn’t mean they have any sense; trying to breach a political problem from exactly the wrong end of the mule. Instead of infiltrating government or congress in order to stick their unwelcome noses into the internal problems of a foreign country, they try to curb the Burmese-Karen civil war by praising Jesus and bringing penicillin to a handful of people who are going to die in the next raid.

When Rambo gets on the 50-calibre, joyously slicing military bodies in half, at least the mercs behave like mercs and fight back ferociously; they don’t sit by idly or cry like lady-boys like most B-Listers in these movies – Stallone (as director/writer) allowing them their own Rambo-moments in the sun.

After clinging to that 50-calibre way past the time any mortal could possibly wield it without their flesh being shucked off their bones, Rambo at last brings peace to Burma by killing everyone. With his shirt ON the whole time!

Well, he did win Viet Nam in 1985, beat Communism in ’88. How hard could Burma be? He surveys the scene with a heavy heart as the music swells, then walks off, as char-blackened and sweaty as one of Bruce Willis’s t-shirts in DIE HARD. His next assignment, we presume, must be Darfur.

And just when we think it’s safe to go trekking in the jungle without being cut down by howling junta crossfire, we hear RAMBO V is in pre-production. As Stallone says at the conclusion of FIRST BLOOD: “Nothing is over! Nothing! You don’t just turn it off! Heroes ououdaw wohhaah red ’58 Chevy convertible gonna cruise till the tires fall off aoohawou this kid comes up wid a shoeshine box ouuwahou houwanhaaarr.”

More poetry from the Destroyer of Worlds…