Blow me the money.

Mel Gibson is billionaire airline owner Tom Mullen, whose son gets kidnapped in RANSOM. Rather than play to the kidnappers’ ransom demands, Mullen’s status allows him to go on national TV to offer the 2-million dollars ransom money as reward for any info on his son’s kidnappers – the ransom money becomes bounty money! 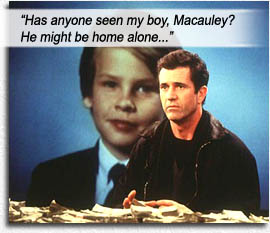 Crazy-eyed Delroy Lindo is the FBI agent helping Tom and his wife (Rene Russo) find their boy, while trying not to act too much like Laurence Fishburne.

Mel and Rene do some fine traumatized acting – we really feel they’ve lost a son – but there’s nothing like Mel’s “tragic face”; you know that look he gets like he’s one feather-push away from going total Riggs.

Ron Howard directs this well-made thriller. First two acts are compelling, especially the twist of turning the ransom into bounty – which sets all the kidnappers against each other and twists Jimmy Shaker’s panties no end. But the last scene ruins any impact of True Vengeance; even robs us of that satisfying feeling of Justice – and I mean True Justice, not The Law’s milky version of it.

It may not be politically correct to “wish” vengeance on someone, even if they’re bad guys – but the Hollywood/MPAA staple that makes it imperative that bad guys should draw first and ONLY THEN be shot down by the good guys is becoming tiresome. (In the original cut – Han fired first!) End result is always the same – bad guy gets killed – but the methods of execution are so painfully pc transparent.

In the film’s climax, Shaker is fist-beaten by Mullen – justifiably – then the cops show up and force Mullen to drop a gun he has trained on Shaker. Even though Mullen has every right to shoot this scum who kidnapped his boy, The Law and our supposed Moral Compass tells us he shouldn’t, tells us the criminal should be wrung through the judicial system for punishment. All that becomes moot when the beaten and bloodied Shaker suddenly draws a hidden gun on Our Hero and Crazy-Eyed Lindo pumps the perp full of lead. Case Closed.

The resolution is the same as if Mullen had killed him, but now we all “feel better” about ourselves because the criminal drew on Our Hero behind his back. Y’know, if you play out this willowy movie rationalization in real life, someone’s gonna get themselves killed for all the wrong reasons.

Where’s Riggs when we need him?