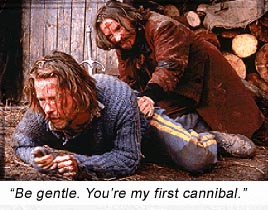 Guy Pearce is beefcake. No – literally.

Pearce is Captain John Boyd, an American soldier in the 1847 Mexican-American war, transferred to a desolate outpost harboring a troop of military misfits, one of whom is discovered to be a cannibal.

Jeffrey Jones is Colonel Hart, leader of this band of stir crazy soldiers, which includes Jeremy Davies, David Arquette and Neal McDonough. One day, a soldier named Colqhoun (Robert Carlyle) appears mysteriously with tales of surviving a calamity up in the mountains.

When Colqhoun leads Boyd’s troop into the mountains to find survivors – lunchtime!

RAVENOUS is an above average thriller in the jugular vein of werewolf and vampire iconographies, where a victim who is wounded by a cannibal becomes one. Rather than cannibals being irradiated townsfolk or redneck hillbillies, RAVENOUS draws on American Native superstitions of Wendigos, where a man absorbs the powers of the humans he eats.

Not just an Algonquian myth, cannibalism is one of humankind’s deep-scarred taboos – traced back even further than the King James Bible, which advocated it in the words of J.C. himself (from 1 Corinthians 11:24, 25):

Lots of blood and bones, bones through flesh, flesh in pots and Guy Pearce looking tasty in all the wrong ways that taste so right…

Who Would Jesus Eat?