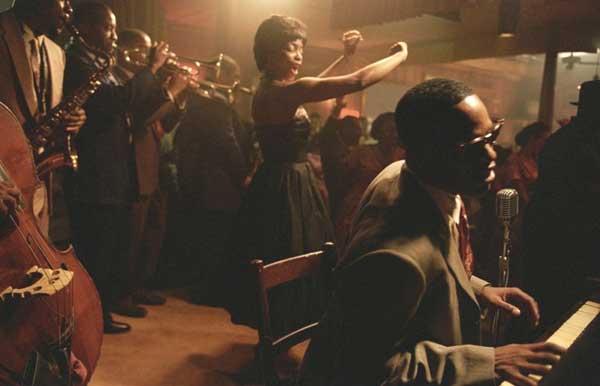 Ah yes, one of those clubs “where black people come to dance erotically.”

Tragedy and Triumph on the Cliché Superhighway.

A talented superstar like Ray Charles deserves every bit of tribute he receives, so the makers of RAY can be forgiven for their “good intent” (tempered by their desire for profit, of course), but in crafting this ostensible monument to the blind blues-gospel pianist, they step knee deep in every cliché created by moviemaking mankind. Thus paving the way for WALK HARD, 2007.

But wait – forget I said that! Whatever you do, do not – repeat: DO NOT – watch WALK HARD before you watch RAY.

Jamie Foxx IS Ray Charles. He puts his heart, soul and fingers into this portrayal (but that’s Ray’s voice on the songs). Foxx saves the film ten times over, from his wonky gait to his rapid-fire faux-stuttering. If it weren’t for his studied performance the film would be a collection of lazily constructed screenwriting-101 vignettes, arcing from celluloid adversities to pat resolutions, from script-friendly downfalls to readymade redemptions. Sex, drugs and rock and roll aplenty, because where would that cliché be without that awesome reality that some of us have been lucky to live through?

Story flits between Ray’s childhood, where we see the accidental death of his younger brother that would haunt him for life (at least in this movie), and the “present” – Ray on the road, Gettin’ robbed, Gettin’ stoned, Gettin’ beat up, Broken boned, Gettin’ had, Gettin’ took, I tell you folks it’s harder than it looks.

Young Ray’s mother (Sharon Warren) sends Ray away for better care as he starts to go blind. We cannot imagine how disturbing and scarring this era in Ray’s life must have been, but the effect is diluted by Warren’s unintentionally hilarious dialogue; everything she says is a platitude or a formulaic foreshadowing. She’s Richard Crenna in FIRST BLOOD – all that’s missing is the lightning and orchestra stabs after all her calamitous portents and prognostications about Ray’s talent and bright future. I sorely doubt Ray’s mother ever said one line even close to those shoved into her Hollywood mouth by director-writer Taylor Hackford and co-writer James White. Easy to write meaningful dialogue in retrospect, isn’t it, guys? 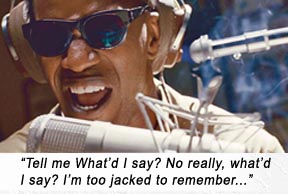 Thankfully, this poverty-stricken black blind boy was fiercely talented – as proven by his actual records. He was not just a novelty act, but as good as the performers of his day. His early life on the road is compressed and simplified. Example: at the little club where Ray starts out – hecklers. But as soon as he begins playing piano, they are impressed enough to get up and dance. Immediately. There’s not even any lag time for the soundwaves to reach the crowd’s cochleas – they’re on their feet at the speed of light, because Ray is just soooo talented.

Amazing fact: Ray never used a cane or a dog (maybe because he could afford PEOPLE?!); he reveals ingenious methods of getting by: insisting he got paid in one-dollar bills to avoid being cheated; sewing numbers on different-colored socks, listening to the echoes of his shoes to gauge hallways and doorways, and the canniest trick of all – feeling the girth of women’s wrists to ascertain whether they were worth plonking.

Suddenly – Booger! Curtis Armstrong as legendary producer and founder of Atlantic Records, Ahmet Ertegun (who tells Ray that no one has ever combined gospel and blues before – wonder if that’s true); lovable Larenz Tate as a young Quincy Jones; Richard Schiff as producer Jerry Wexler, Atlantic Records VP; Terrence Howard as an underhanded band leader; Kerry Washington as backing vocalist Della Bea Robinson, whom Ray would marry and then cheat on constantly, with Regina King and others.

Della calls Ray’s gospel songs “sacrilegious.” Uh, isn’t the very definition of gospel the opposite of sacrilegious? I think I missed something in not living down south fifty years ago and being religiously retarded.

Ray sired innumerable children, which the movie downplays, ending before the bulk of Ray’s life could be covered. Suddenly there’s a lightning montage that takes us up to real footage of old Ray onstage. The filmmakers just wanted the True Hollywood Story parts and screw the major successes after the rehab – no drama in that.

It’s not exactly disrespectful to Ray Charles Robinson, and Jamie Foxx is magnificent, and the music is, of course, dynamic and buoyant, but the best thing to ever come out of RAY – is WALK HARD: THE DEWEY COX STORY.

Okay, you can go watch it now…