Post-Nazi West Germany. A young boy vomits on the street in a rainstorm, in Neustadt, 1958. An older woman helps him. What follows? Full frontal sex, sex and much more sex. In between reading, reading and much more reading. 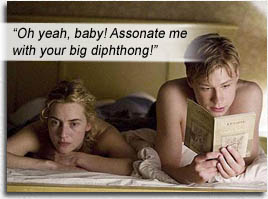 Well, the movie is called THE READER, a heavy-handed, manipulative “romance” tale that will tear-jerk those who are inclined to be that way jerked, but will infuriate others with a shred of ethics.

German-born David Kross is the young boy, Michael (looking like Peter from NARNIA, with much more beaver surrounding him). Kate Winslet is the older beaver, Hanna, unafraid to tap a 15-year-old for his endless spermatozoan reserves. And, apparently, his reading skills. She’s a poor illiterate tram guard who relishes his knowledge of the written word – from Tintin comics to Homer epics – but keeps her illiteracy a secret from everyone.

Years later, law student Michael witnesses the trial of six female war criminals – one of them, his ex-beloved Hanna, a former guard at Auschwitz! She would pick out young girls for execution, but first make them read to her; even sicker than the other war criminals who just gassed everyone. 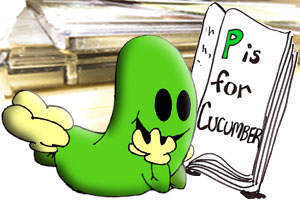 In keeping her illiteracy a secret (out of vain stupidity, it would seem), Hanna takes one for the team when she is accused of writing and signing orders for executions – something which only Michael knows she cannot do – and is sentenced to life.Fast forward to 1995, and Michael, now a mourning-faced Ralph Fiennes, decides to perk up Hanna’s incarceration by reading books onto tapes for her. Hundreds of tapes, which enable Hanna to teach herself to read. Yet he refuses to visit her or return her scrawled letters. We realize he is torn between the beauteous memories of his spanking he got from her as a lad, and the ethical ambiguity of loving a ruthless Nazi.

The novel by Bernard Schlink is a giant in German literature, that I presume asks many more questions about the Holocaust than screenwriter David Hare’s and director Stephen Daldry’s film is prepared to do. Though the film is an emotionally powerful drama, only two major profundities are explored.

One is voiced by a law student regarding the scapegoating of the six female guards – which also hits the criminal Bush-Cheney administration right on its head: “The trial of these six women is a diversion. You put them on trial, you say they were the evil ones, they were the guilty ones, because one of the victims happened to write a book. Do you know how many camps there were in Europe? People go on about, How much did everyone know? There were thousands of camps. Everyone knew! Our parents, our teachers; that isn’t the question. The question is, How could you let this happen? And better, Why didn’t you kill yourself when you found out?”

The film’s other profound strength is portraying Hanna – the heroine – as an indoctrinated Nazi. It is easy to convey Nazi amorality in soldier characters with blue eyes, SS uniforms and severe “Cherman” accents – much more jarring when the indoctrination is manifested in a simple woman who is the love interest.

Michael is shattered when he meets old Hanna (Winslet in excellent aging makeup) and finds no remorse in her, “It doesn’t matter what I think. The dead are still dead.” Her blind ignorance furthers his mourning face,
“They had to be cleared! More were coming in!”

Poetic ending: Hanna piles books on a table to attain a good height to hang herself… shouldn’t we be saying, Good Riddance? Especially to someone weak-willed enough to be inculcated to war crimes with no discernment or remorse (N.B. the Ku Bush Klan: Rove, Addington, Woo, Cheney, W., Rice, Ashcroft, Wolfowitz, CIA torturers, soldier grunts who committed atrocities at Abu Ghraib, et al).

Instead, tears for the Nazi… because she’s Kate Winslet. Movie manipulation at its best. Get the great Ralph Fiennes to cry over her and a tear-jerk fest seems so right. For the wrong beaver.