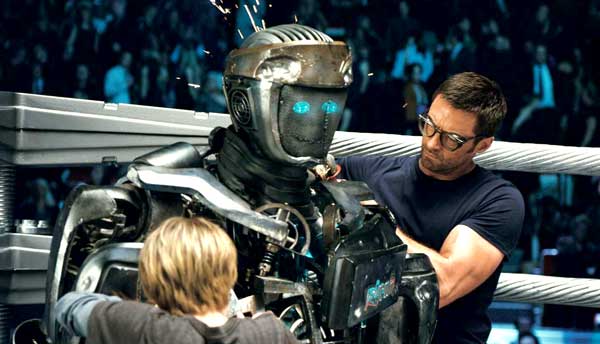 Swapping out the Intelligence Meter with the Big Bicep Reloader.

I’m going to officially declare this movie hella enjoyable. It may not be the Oscar-muncher of the year, but it’s definitely the most fun. And is it coincidence or mild irony that Wolverine is the star of a movie called REAL STEEL?

In the near future, humans have stopped the obnoxious “sport” of boxing – and transferred the stupidity to eight-foot tall robots with flamboyant names (like Midas, Ambush, Noisy Boy and Zeus). Remote controlled by humans, these ‘bots do our dirty work, thereby vicariously retaining the brutal element that raised us from the caves, yet removing our frail flesh from the mix. 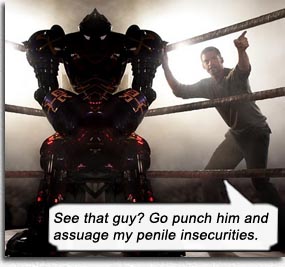 Hugh Jackman is Charlie Kenton, an ex-boxer who now hustles in the metal-bending underground robot boxing scene that is slipping out of his grasp. He’s that “friend” who’s always begging you for a loan to bet on a “sure thing” – and losing. An excellent performance by Jackman, as he makes himself wholly unlikable in the first act: reckless, rootless, shiftless, unheeding advice on straightening his life, even from his best girl (Evangeline Lilly – the new Kate Beckinsale – what a perfect nose!); and to top it off, he discovers he has an 11-year-old son from an ex-girl, gaining unwanted custody of this boy just as he embarks on a fight tour with his robot. Blame it on insensitive courts and Plot Convenience Screenwriting.

Dakota Goyo is Charlie’s estranged son Max, who discovers a discarded robot called Atom (no prize for phonetically sounding like “Adam,” First Man), and trains him to become an unlikely champion. Though Charlie sees the robot as merely a cash cow, Max embraces the beast as a surrogate father, who doesn’t judge, doesn’t question and doesn’t leave; and on Atom’s face, the vestiges of weld marks create the hint of a permanent innocent smile. This aspect of the movie almost reminded me of Pixar, how they imbue lifeless things with an inner spark that compels us to care for their fates.

But this ain’t Pixar – it’s Touchstone/Disney, so of course, the kid is smarter than the parents, the woman is smarter than the man, and the pet is smarter than everyone. In this case, the pet (the robot) opens the mind of the kid, and the kid unlocks the father’s paternal instinct. It’s not as gay as it sounds; in fact, it’s refreshing that under the ostensibly simple premise of boxing robots, and the awesome coolness of the robots striding metal through it all, there is a heartfelt story of loss and redemption.

The father, his boy and their robot come from three different directions of loss (he has lost his career, the son has lost his family, the robot was found discarded in a sewer) and only through their threeway collaboration do they overcome the odds. In the underdog robot, the abandoned son finds a surrogate father, and the frustrated father finds a surrogate boxer to impart his skills to. Atom was designed as a sparring ‘bot, able to take a punch and get back up again… hmm, the metaphors come thick and fast… ironically, only through Atom’s brutality does the frail flesh find meaning: father redeems himself to son, and son grows to respect father. (Who said boxing has no redeeming qualities? Oh, that was me.) 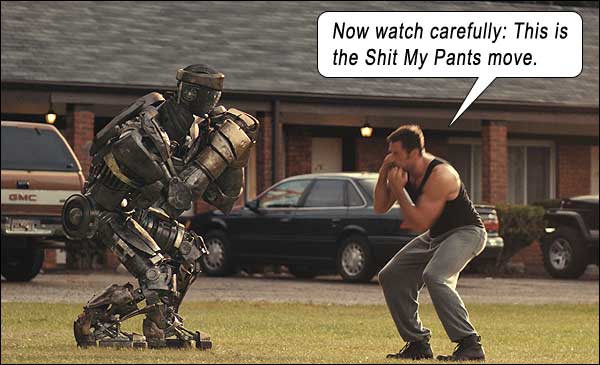 The robot designs are a welcome relief from the eye-strain of the TRANSFORMERS‘ metal ganglion: relatively sleek with just the right amount of street cred carbon scarring.

Atom has a “shadow feature” that allows him to mimic his trainer during fights, basically shadow boxing. So Charlie uses his human skills to make Atom beat down his opponents. (Isn’t that kinda cheating? Or at least defeating the purpose of removing the human element?) As Atom and the Kentons rise to prominence, they must face bigger and flashier hipster demolition ‘bots and evil Asian controllers with urgent designer jeans.

And in the final battle, as Charlie and Atom fight to the death against their most hipster Asian opponent (Karl Yune) and a destructo-bot named Zeus, Atom’s metal arms shadowing Wolverine’s sexy punch-dance, we see Max looking on in love as he realizes his father has been brought back from the dead and is only alive doing what he does best (and what he does best isn’t very nice). We see Evangeline’s perfect nose watching Charlie and Max bonding through senseless brutality, a mixed message that is stupid yet poignant, and we realize that this heavy metal has turned into adult-oriented pop.

But I gotta admit, it works. In the way he frames these final scenes, director Shawn Levy cuts through the cheese of redemption slomo with some real heart. It is truly touching how the inanimate object brings out the best in the humans. Through, uh, senseless brutality…