Reaping what you sow: Superstitious Stupidity.

Hilary Swank seems to have no concept of bad or good movies – either her agent or advisors or herself have no integrity or simply no discernment between choice roles and duds – wild swings from the silly THE NEXT KARATE KID (1994), to the bravura BOYS DON’T CRY (1999), to the execrable ignorance of THE CORE (2003), to Eastwood’s moving MILLION DOLLAR BABY (2004), to the superstitious stupidity of THE REAPING. 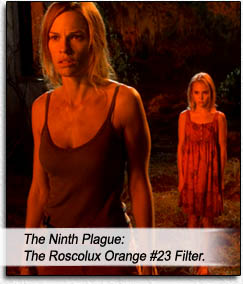 Does anyone in her camp know which way the wind is blowing? It’s blowing in the direction of work, I guess. We should all be so lucky, picking up a paycheck whether we’re working for the best or worst filmmakers.

THE REAPING finds Swank as a scientist who debunks religious superstitions (tautology, I know). Only problem is: in THIS stupid movie, superstition wins.

Summoned to a small town which seems to be suffering the ten biblical plagues, all her rational explanations are debunked themselves when she encounters the Creepy Girl-Child (AnnaSophia Cobb).

Whereas films like THE EXORCIST unfold in a world where demons do exist, with all their attendant supernatural rules, THE REAPING pretends sensibility, establishes ground rules, then cops out to superstition with no rules, meaning everything magical is an excuse to max out the CGI budget.

A few scares and scientific jargon later, Swank uncovers the townsfolk plot to kill the girl-child because she really is magical – even though they blindly worship an imaginary god who is supposedly magical; the last thing they want is someone closer to god than themselves in that way. So Swank must protect the child with the irony of her secularism.

Stephen Rea in a priest cameo, acting all scared and silly. Movie so slow and boring and meaningless, final scenes guarantee a big fireworks display. With her record, at least Swank’s next project should be watchable.