A Giant in a midget’s movie.

REBEL WITHOUT A CAUSE has become a national treasure due to its deceased star. I’m here to prove that the title itself is a misnomer and that the movie’s status has been conflated with its star’s talents; movie itself is dated, embarrassing, out-of-touch and very, very gay. And not in that fabulooouus way either. 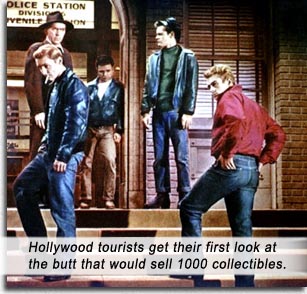 “Teen” Jim Stark (23-year-old James Dean) is a new kid in a rough town. His parents have moved many times due to him “getting into trouble.” Unfortunately, this new town – Los Angeles – seems like the same old story when Jim encounters the local “teen” thugs and falls into all sorts of trouble involving knife fights, stolen cars and wearing his dress pants too high.

Jim also finds two kinds of love: the generic puritanical kind with Judy (Natalie Wood), who falls for him two days after her boyfriend goes off a cliff – on the rebound much?; and that other kind of love that dares not speaketh its name in 1950’s movies – a boy friend (keep those words separated now!) named Plato. Sal Mineo plays outcast Plato like his pants are on fire and only Jimmy Dean’s wet lips can put them out.

Jim is challenged by the local gang, led by Buzz (Corey Allen, with his pompadour set on stun), to drive a stolen car off a cliff and leap out at the last minute. When Buzz dies in this stunt, Jim wants to report it to The Man (Edward Platt – The Chief from GET SMART – here playing, uh, The Chief) but Jim’s parents (Jim Backus aka Thurston Howell III, and Ann Doran) don’t want him to get involved, which sends Jim into a hissy fit – his parents raise him to be principled yet don’t display principles themselves – and precipitates that infamous scene where Jim wails, “You’re tearing me apart!”

Let’s face it, inculcated hordes: It looks a lot like Jim Stark is no rebel (he wants to follow societal protocol by going to the police – Lord knows, he looks exactly like one of them with his skinny tie, white shirt and slicked back hair), and he’s got quite a “cause” (to report the stolen car that went off a cliff and killed a greaser boy-man). He’s no nihilist or anarchist; he’s not on drugs, he’s not into Nazis, he doesn’t believe God Is Dead. He’s a good kid who barely makes the definition of Very Naughty Boy. Thus: the movie title that young punks and old aficionados have been adopting as their ethos or thesis over the past half-century – is moot.

I rest my case, yeronner… 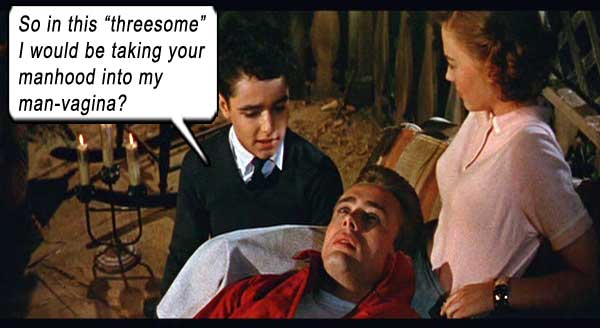 To enjoy – or just appreciate – REBEL WITHOUT A CAUSE, separate James Dean’s Brando-esque firebrand performance from the movie; it is an entity all its own, overwhelming the melodramatic “theatrical” styles of all the other principals (including Backus, Platt and the non-entities posing woodenly as Judy’s parents). Dennis Hopper would cite Dean as the best actor he ever worked with.

The movie itself is ridiculous. Though it has informed a wealth of cultural media, from GREASE to HAPPY DAYS to BACK TO THE FUTURE, when we remove the aura of its star, it is padded with ridiculously-staged fight scenes, tiresome love-talk, laughable acting, watery motivations, intrusive soundtrack making it sound more intense and interesting than it really is, and Sal Mineo in the most overtly gay-but-not-called-gay performance of the 1950s.

The iconic Griffith Park Observatory features in key scenes. Jim visits the planetarium where the old professor seems to have mixed up the scientific discipline of astronomy with the idiotic ruminations of astrology, as he shows drawings of the Zodiac on blank spaces of sky that have nothing to do with the actual constellations.

It is here Jim encounters Buzz’s gang (featuring 16-year-old Dennis Hopper, and Natalie Wood almost strangling in her pointy bra) and partakes of a knife fight so exciting I nearly woke up. Meanwhile, Sal Mineo, who looks like he’s ten, cheers on Jim, while ogling his butt-cut Levis.

Natalie Wood’s character Judy is supposedly from a callous family environment. And what’s the best the filmmakers can come up with to illustrate this? Her father slaps her for trying to hug him. (Note that while she’s trying to show her affection for him, he’s busy panty-handling a little boy on his knee, groping him like a Catholic Republican bishop.) William Hopper (no relation to Dennis) is Judy’s father (whom Mitt Romney took mannequin lessons from, looking like his kids should be calling him “Daddeh” in a British accent, dressed in pajamas stolen from Michael Rennie in THE DAY THE EARTH STOOD STILL – but why wear space-pajamas if you and your wife are sleeping in separate beds?); he believes it’s improper for a girl to show her affection that way. He’s not drunk, not mean, not even mirroring social mores – just giving Judy an excuse to be discontent at home. Or maybe he’s also latently gay and can’t stand the touch of a woman, which would explain the separate beds – and those pajamas. So that’s why Judy’s out on the streets running with gangs and wearing those pointy bras!

Plato is a rudderless, troubled youth – problem is, the tragedy of his backstory and his unconscious search for a mentor/father figure in Jim Stark is only apparent in the dialogue of his black slave (Marietta Canty – listed as the “family maid” but no one’s foolin’ anyone). His performance is imbued with none of that pathos, but rather latent homosexual innuendo. It would not be so excruciating had the Hollywood system allowed him to openly sexually pine after Jim, but the industry at the time portrayed gay characters as “troubled,” which was code for latent and/or repressed; they were damaged goods that needed to be eradicated, rightly or wrongly. Witness Plato’s fate: gunned down by police (admittedly by mistake, but again – no one’s foolin’ anyone…). 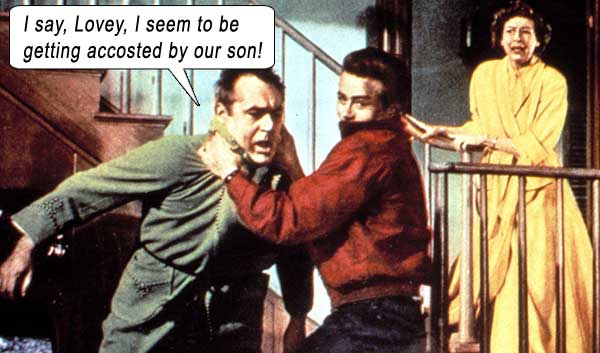 Most movies – especially B-movies – don’t portray society as it really is. They reflect people’s expectations of what society should look like. REBEL is no exception. Did 1950’s married couples ever sleep in separate single beds? Did the police ever personally help troubled teens unless the teen’s parents were funding the department? Were punk teens ever pushing thirty? Did teens ever wear their pants that high?

REBEL gives us the out-of-touch grownups’ version of troubled youth. The writers (Stewart Stern, Irving Shulman and director Nicholas Ray – who would later direct a story of a different kind of rebel in KING OF KINGS, 1961) couldn’t even conjure compelling reasons for the teens to be “rebels.” Put ’em in leather and pompadours and make them wanna have The Sex – that oughta scare the grown ups!

James Dean died one month before the release of REBEL (during the filming of his next – and last – film, GIANT), and the remembrance of his talent has erroneously caused this film to be remembered in the same glowing light. But re-view the film and ask yourself whether it stands up to modern scrutiny: Plato lying on the floor and falling asleep, sooo tired after chasing Judy; or hiding from thugs with knives – when he’s armed with a gun; Judy asking Jim “Is this what love is?” after knowing him two days (Why don’t you try chiseling off that pointy bra and we’ll find out?); the childish blocking of the final police standoff; the unnecessary confusion over Jim’s red jacket in the final killing scene. Film world, I beg you, stop calling REBEL WITHOUT A CAUSE a classic, without any cause to do so —