The setup of RED EYE is thriller-worthy: a charming stranger (Cillian Murphy) insinuates himself into the good graces of a young woman traveling alone (Rachel McAdams) on a Red Eye flight from Dallas to Miami. 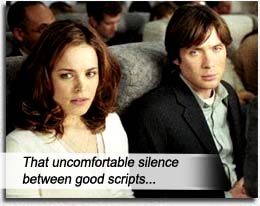 The exposition is dynamic: because she is virtually trapped in the airplane, seated beside him, the stranger’s beguiling attitude suddenly becomes very cold as he outlines a plot to her – he holds her father hostage (a very slim, very underused Brian Cox), to blackmail her into being complicit in the assassination of a senator.

But the denouement is dreary: like the Red Eye flight their characters spend most of the movie on, director Wes Craven and writers, Carl Ellsworth and Dan Foos have nowhere to go but down, as we once again realize that American senators DO NOT get assassinated in American movies of this weak-chested ilk. This is not an Oliver Stone or Clint Eastwood film – those guys can get away with almost anything – this is Wes Craven, the man who brought us THE HILLS HAVE EYES (1977), SWAMP THING (1982) and SCREAM (1996). No big leaps of bravura. Consequently, the outrageous assassination attempt (launching a rocket from a boat in the ocean to the penthouse suite of a hotel on the shore) reeks of desperation to inject the dragging plot with some kind of Van Damme-ish audacity.

But as the movie drags on, the longer it keeps going, the less and less it compels, until the last act’s obligatory and interminable Chase Sequences only serve to dull an already blunt climax.

Like reading this review, by the end of the movie, you find yourself asking, “Is that it?”