The OTHER Mission to Mars. In March 2000, Gary Sinise and Tim Robbins, under director Brian de Palma, went to Mars ignorantly. In November of that same year, Hollywood synergy (read as plagiarism) sends Val Kilmer, Carrie-Anne Moss and director Antony Hoffman to the same planet just as ignorantly, in RED PLANET. 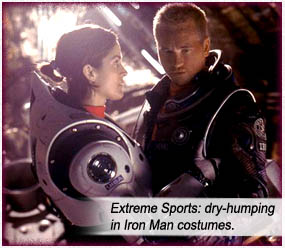 In 2050, Earth is such a wasted tramp of a planet that humankind is considering Mars as its next rape. A scout ship is sent to the red planet – but here’s the twist: instead of sending well-trained, staid scientists and astronauts, they sent a bunch of actors. Trying to pass as scientists seeking answers to overpopulation, their uninformed stupidity, specious philosophies and insufferable overacting tell us they’re really seeking Golden Globe nominations.

Val Kilmer is the maintenance jockey (the least scientist-y of the ersatz scientists), Carrie-Anne Moss is the ship commander, (breasts a-strainin’ against her sweaty commander t-shirt), Benjamin Bratt the womanizer, Simon Baker the Weird Guy, Tom Sizemore is Dr. Quinn Medicine Woman and Terence Stamp is a pontificating pain in the arse.

Stamp pompously opines, “I realized Science couldn’t answer any of the really interesting questions.” One wonders which “science” he studied, as ALL science answers exactly that. Either this failed Nietzsche has no clue on Scientific Method or he never asked any really interesting questions… or he was always just a religious nutjob who was trying to find the Scientology mothership out here.

Smart-mouthing their way to Mars like glibness is fueling their ship, one of them says, “The hope and survival of mankind rests on us.” Gee, I hope not.

RED PLANET’s serviceable plot involves stranded humans trying to think their way out of a situation that keeps throwing up obstacles – in this case, men landing on Mars with their escape craft damaged and air running out. It could have been a very interesting crisis had the SCIENCE actually been in this FICTION. Instead, like Terence not asking the interesting questions, this movie studiously avoids the interesting science, writers Chuck Pfarrer and Jonathan Lemkin creating a Science FANTASY that makes up rules as it goes along; the worst offender being Tom Sizemore ludicrously rationalizing how there could be breathable air on Mars, to explain the rank stupidity of everyone taking their helmets off so that we could see their pretty actor faces. …From there, it is a low grav downhill ride.

Who are the science consultants on these movies? Is anyone being consulted at all?

One astronaut pushes another off a cliff, yet though they all have their helmet radios on, the pushed guy never thinks to scream into his radio, “Hey, this asshole pushed me off a cliff!” When Moss is giving Kilmer CPR in zero-gravity, the computer instructs, “Stand him up, Commander” – but how will that help in zero-gee? (Fun fact: The ship’s computer voice can only be described as a female version of Stephen Hawking’s electronic voice.) And of course, there are sparks aplenty that shoot out of all the computer consoles when things go awry.

As in every movie that presents a moral dilemma where only one person can save himself, there is never any real dilemma, as the story neatly kills off the other good guys who might have had to draw straws.

The stakes are ramped up for no reason at all when Kilmer’s panther-like robot, AMEE, goes into KILL mode, enabling the killer who pushed the guy off a cliff to get his just desserts. And Val Kilmer – as was pre-ordained by Romantic Ending Protocol – spends a languorous six month ride back to Earth humping the busty commander.