My, what big eyes Amanda Seyfried has!

RED RIDING HOOD is a reimagining of the children’s tale about the talking wolf that eats grandmother. What better way to represent an anthropomorphized lupine than making it – a WEREWOLF? 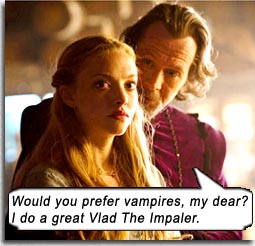 As this mysterious werewolf stalks a medieval village, we constantly ask ourselves, “Why don’t I feel any foreboding or tension? Why does it all seem like a school play?” Maybe because all the Fear has been leached in favor of the love triangle between three teens. And as we all know, the world revolves around the petty dalliances of Teen Models.

One look at the director of this piece and it all makes sense: Catherine Hardwicke, TWILIGHT. All the better to Chick-Flick you, my dear.

In this TWILIGHT-for-werewolves, Amanda Seyfried is teen Valerie, who loves teen woodcutter Peter (Shiloh Fernandez), but her parents have arranged her marriage to village rich kid, teen Henry (Max Irons). Valerie’s grandmother is Julie Christie, who bequeaths her the infamous red riding hood; her parents are Virginia Madsen and Billy Burke. (Yes, that Billy Burke; the father of teen Bella in those vampire movies is the father of teen Valerie in this werewolf movie. Cross-pollination or treason?). Lukas Haas inhabits the middle background as a young priest.

Though the werewolf is regularly appeased by offerings of small animals, it has now killed Valerie’s sister – so her wedding is postponed until the sexy teens can stop being virgins and pouting about “being together” (sound familiar?) – oh, and until the werewolf is killed.

Then Gary Oldman arrives like a Big Bad Wolf. Oldman is Solomon, professional werewolf hunter. And his most interesting tool is his big iron elephant. Not a euphemism, he has a big iron elephant that is a prison for werewolves, and doubles nicely as a torture chamber for annoying teens.

He tells them: The Wolf is someone from the village! Dun dun daaaaar!

The actual Big Bad Wolf effects are blackly and hairily fantastic, as to be expected with the state of technology, and like the fairy tale – it speaks! It inexplicably entreats Valerie to come away with it, which might go towards solving the mystery of who it is. And as we speculate on whether it is blond Henry or brunette Peter (as in Peter and the Wolf?!), the secret is revealed – where else? – at Grandmother’s house.

Problem with this romance-thriller is its PG-13 glaze; the only thing “dark” about it is the village studio set lit as nighttime, and its tween rating means a dearth of sex and violence, all promises and no deliverance. All the better to TWILIGHT you, my dear.

A sensual soundtrack, lush set dressing, and ominous Gary Oldman with silver-tipped fingernails cannot save this movie from being a dog.