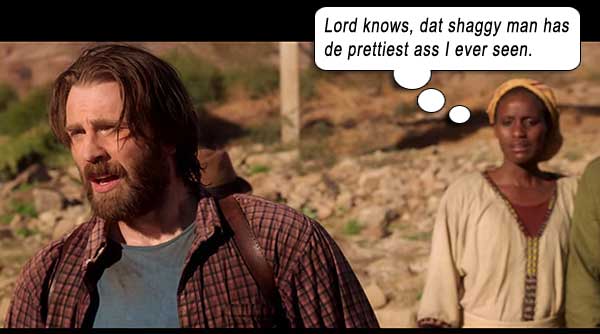 Diving into a fiction of a fiction.

In 1979, Captain America takes time out from saving Americans, to save Ethiopian Jewish refugees in Sudan, under the cover of THE RED SEA DIVING RESORT, a fake resort run by him and his superhero pals, to throw the Sudanese government off their taut-buttocked scent.

Chris Evans is Ari Levinson, heading a team of avengers–sorry, let me rephrase that—a team of Mossad agents, who commission the abandoned seaside resort in order to smuggle refugees to Jerusalem. The corrupt government (that is bribed for the license) believes the ruse so fully that it refers tourists to the resort – which the team realize they must actually run as a proper business during the day, boating and diving and spear fishing, to avoid discovery. (Movie could’ve taken a turn right here, on specialized mercenary agents having to cook meals, make beds and clean toilets, and it would’ve still been interesting viewing; I mean, running a resort ain’t no small thing!)

Hardest suspension of disbelief is flensing the image of Captain America; Evans has just appeared in a few of the largest-grossing movies mankind has ever seen; it must be hard for him to find credible roles these days with his prominence as The Prettiest Avenger. As with his grave role in SNOWPIERCER (2014), any time he wants to be taken seriously, he has to grow out his Noah-beard. The jury is still out on whether he looks Israeli with it or not… And of course he runs back to pick up the lone boy left behind because – he’s a super soldier—dang! I did it again! Sorry, Cap—I mean, Chris!

RED SEA is a noble pursuit – recognizing the humanitarianism of the rescuers and the humanity of the rescued – but the movie is weighed down by an overarching irony: though Evans is trying to escape his image as the Hollywood glamour-puss by accepting poignant, powerful roles such as this, the movie itself is riddled with every action movie trope from the movies that Evans is trying to escape from. The Red Sea Diving Resort was itself a fiction – a façade to disguise the real purpose of the agents there – and this movie is an action movie fiction of that fiction!

Does the hero really have to be reckless and have a shaky marriage that is reconciled in the final frames? Does he have to disagree with his best friend on the existential purpose of their mission? Did each merc have to be a specialist at their craft, like a superhero team? Does the plane really have to be pursued off the runway by guerillas with mere seconds to spare? Does there have to be a tree on the runway to endanger them as they fight for takeoff speed? And did somebody really have to yell, “We’re not gonna make it!”? All useless filler, for a tale that would be compelling even without the extraneous “dramatic license.”

[To the tune of It’s Beginning To Look a Lot Like Christmas]: It’s beginning to feel a lot like ARGO. Like operation Argo, RED SEA was also executed during the Carter administration, and was another covert op that could not be revealed during its execution.

Even the misrepresentative trailer is edited for Action Movie Erection: the characters have been dubbed with different dialogue, to what they’re actually saying in those scenes, and the audio is cut to action visuals – completely whoring itself to Hollywood.

Ari chooses his team for the Red Sea Mission in a montage of Getting The Band Back Together: the sharpshooter (Alex Hassell, looking like Jude Law), the doctor (Alessandro Nivola, AMERICAN HUSTLE, with a terrible fake Australian accent), the judo expert (Jennifer Lawrence lookalike Haley Bennett, THE MAGNIFICENT SEVEN 2016), and the playboy (Michiel Huisman, THE INVITATION), whose skill just seems to be banging.

Michael Kenneth Williams (so good in WHEN THEY SEE US) is the Ethiopian insider Kabede, who is thankful for Steve Rogers—uh, Ari Levinson putting his heart and shield into the missions, yet always reminding him that he can leave any time, while for Kabede, “This is my life, my family. It’s not a ‘mission’ to me!”

Greg Kinnear is CIA agent Walton Bowen, in the dark about the mission, and actually chiding Ari on taking refugees out of the country, because the UN pays a stipend to the families harboring refugees, so it’s bad for business if the refugees keep disappearing; Ben Kingsley, as some Mossad chief, required only to drive home the trope that he’d never hire Ari’s team “because they’re all too reckless!” Pssh! Hollywood cliché upon Hollywood cliché…

Title cards and montage illustrate the missions piling up: Mission No. 2, May 1980; Mission No. 6, September 1980; Mission No. 17, August 1981; thousands of refugees smuggled to American ships 12 miles off the coast of Sudan. Interspersed with scenes of the team running the hotel – oh, for fun! 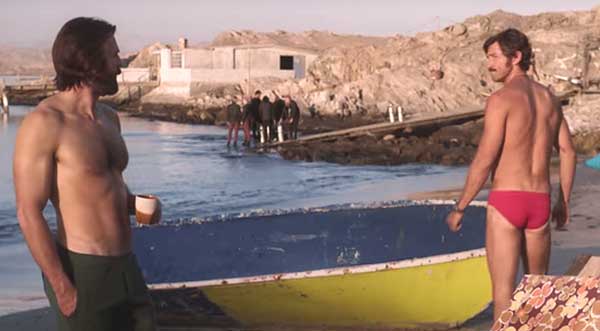 America’s Ass meets Europe’s Ass in a battle of the bulge.

In an effort to make the conflict easy for us free nations to understand, the movie boils down the team’s adversity into one villain, a mad guerilla colonel (Chris Chalk), who plays a double-necked Gibson SG using a bullet as a pick. He’s the guy always sniffing around the resort and causing movie tension. I’m sure there must have been innumerable factors contributing towards this operation straddling failure, but Mad Colonel Bullet-Picker is what they choose to represent all ills. His men shoot at one of Cap’s trucks, laden with refugees, as it breaks through a roadblock. Then they don’t give chase. Guess they figured the truck would have to come back the same way? But we jump cut to the next night, when the Colonel makes a surprise visit to check the truck – no bullet holes… Wait, you’re telling me these fanatic military guerillas couldn’t hit the back of a truck?! And how did it return to the Red Sea Resort through the roadblock?

Ari and his bestie (the doctor) get captured. Doc has a character-building episode in jail, melting down over being so stupid to follow Cap into one life-threatening situation after another. He even derides Cap’s gung-ho attitude, “It’s not romantic – it’s practical!” which is a little obtuse coming from a character in this movie where everything practical is romanticized.

When the judo girl visits the corrupt commandant to get the two men released, we begin to question exactly how high the stakes are. I would imagine in this corrupt, despotic dictatorship that troublemakers like Ari and his team would be executed offhandedly. but they seem to sport unbreakable plot armor. That vanadium shield comes in so handy!

Kingsley tells Cap the country is in revolution – uncovered women beaten in the street, whites shot at, arrested, expelled – and to end his involvement with Sudan while the mission is still a success. (“Success” measured by the Mossad is having rescued thousands of refugees without their cover being blown by the Sudanese militia. The fact that thousands more still awaited rescue was irrelevant.) Cap stays. But even this is only to fulfill Hollywood trope (the noble hero), because he then leaves with one particular plane-load for the climax of the film, even though Kabede laments the struggle isn’t over.

Final scene is epic Hollywood Cheese Prime, as a giant cargo plane lands for a final evacuation (but it’s not the final evac – just made to look that way), with all sorts of fictional ticking clocks: a fictional fight to throw out the passenger seats to make room for the refugees, fictional Mad Colonel’s soldiers racing in their jeeps to halt the takeoff, a fictional tree in the middle of the runway– Jesus! Please! Enough already! Writer-director Gideon Raff has been watching too many DIE HARD movies.

At least after all this fictional claptrap, it is sobering, sad, and yet very cool, to see actual footage of the refugees exiting the cargo plane. Now all we need is a few more Avengers and we can call it CAPTAIN AMERICA 4.