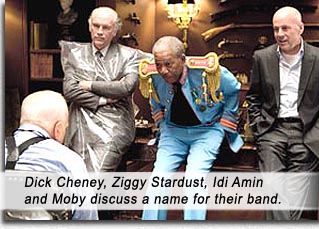 From a DC Comics graphic novel (by Warren Ellis and Cully Hamner), RED follows Frank Moses (Willis) as he evades CIA operatives sent to kill him, led by Cooper (Karl Urban). It’s easy to evade bad guys in movies who still can’t aim after all those years of CIA training. Yes, it’s the yawn plot device of CIA trying to kill its own ex-operatives. Frank recruits his old team mates to get to the bottom of why. (Why? Because it’s the CIA, stupid! That’s what they do.)

Beautiful Mary-Louise Parker is Sarah, a cubicled government accountant who dwells romantically on her spy novels, merely a phone flirtation for Frank, until he inadvertently pulls her into the chase and she finds herself on the lam with an All-American Hero more virile than any Fabio-based cover model. Her wonderment, amusement and sensual excitement are pitch-perfect, with just that right dash of spinner cuteness. Positively glowing.Brian Cox is The Russian Guy. Was Rade Sherbedgia busy? In forbidden love with Helen Mirren. (Who isn’t in forbidden love with Helen Mirren?..)

Suddenly – Richard Dreyfuss! He’s a slimy weapons contractor (cough–Halliburton) who uses the CIA as his personal hit squad, under orders from the vice president — oh, so this is culled directly from the desk of the real-life Dick Cheney (Dreyfuss played that low swine in W.); here, the VP is Julian McMahon (appropriately, Dr. Doom from FANTASTIC FOUR, and the real-life son to a former Australian Prime Minister, William McMahon).

RED is solid action-comedy that doesn’t take itself too seriously, yet seriously commits to delivering cheeky China White straight-to-the-vein outlandish bombast. Just how drunk was the stunt coordinator who thought up the eye-popping gag of Willis stepping from a spinning car, guns aimed and blazing? And how uber cool (and sexually arousing) is Helen Mirren pumping an automatic machine gun or Bruce Willis in hand-to-hand combat beating up on some guy half his age?

Of course, the mindless action would be immaterial were it not punctuated by the personalities of the principals; Willis, Malkovich, Mirren and Freeman armed not only with guns that never run out of ammo, but a dry, deadly wit that only comes with the accumulation of years that these red-blooded wolves have spent howling at the moon.