REDACTED shows us why. Written and directed by Brian de Palma, we follow a small cadre of American troops for a few explosive havoc days of rape and murder in Samara, Iraq. Based on a real account of the rape and murder of a 15-year-old Samara girl, I researched the web for this particular incident… and ended up reading dozens of other cases. 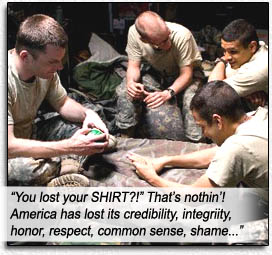 I stopped searching. Nothing unique about this movie’s incident. It had become common practice with the ignorant thugs who had become the lowest swine on the planet – the Amerikan Military. (An Iraqi soldier comments that REDACTED shows one rape – while he has witnessed thousands.)

Almost a retelling of De Palma’s own CASUALTIES OF WAR (1989), where dehumanization of Vietnamese created a brain cloud of callousness in the American military that caused more terrorism towards the race they were supposedly aiding (plot, like REDACTED, also involves the rape and murder of a local girl), REDACTED shows us how modern American Military in Iraq, like mongrels off their leashes, also inculcated to dehumanize their enemy, create more terrorism towards Iraqis than the other way ’round. And – at the risk of sounding like a broken record – one man bears the brunt of this blame. George W. Bush.

In the final telling, Bush must answer for over 2 million lives, American and Middle Eastern – lives lost, destroyed, displaced, diverted for no reason other than his warped megalomania and tyranny. “We’re fighting them over there so we won’t have to fight them over here,” never takes into account that is EXACTLY where jihadists want Americans – “over there” saves on jet fuel and boat rides to kill infidels.

REDACTED opens with grunt Angel Salazar (Izzy Diaz) – a little too lucid and articulate for a PFC named Angel Salazar – filming and narrating on his vidcam, setting us up for disjointed storytelling (“shit happens”) and non-Hollywood editing (cos it’s his vidcam, see?), but absolutely failing to sell it. Film aims so hard at being “reality TV” (by being lensed through various security cams, embedded reporter footage, hidden terrorist cams, cellphone video, online wives’ videos, Arabic website footage, etc. – there are no actual “movie camera” master shots and cutaways), that the “natural” acting is anything BUT.

The first action vignette is beautifully staged, as soldiers fight to keep their eyes open at a dull checkpoint, while Handel’s Sarabande in D minor lulls us into a false sense of quietude. De Palma plays this scene like a French documentary, showing us the complications at just this one checkpoint. As the American troops describe how they’ve set up extensive Iraqi signage outlining checkpoint procedures, a French narrator tells us that studies show over half of Iraqis are illiterate; which means most of them cannot read the instructions and have no idea of checkpoint protocol at the Terrorist Amerikan Checkpoints.

After nothing happening all day, all hell breaks loose when a car doesn’t stop at its prescribed point. A pregnant woman is killed, and we see the massacre through the eyes of a non-American news report.

Removing us from provincial American reportage enables us to perceive the incident with clearer vision; then de Palma drops us back into the ignorant provincialism of the American grunt camp; utterly remorseless and flippant, they refuse to comprehend how other cultures might misinterpret their hand signals or speech, blaming the driver for the massacre.

Many would argue that these inmate-mentality drogues are not representative of American soldiers. But REDACTED raises the horrifying reality that these are not the exception – they are the rule. We would know this if the information dribble from war zones was not being “redacted” by the duplicitous government (whole pages, lines and incriminating evidence obscured or removed from reports before being released to the public). Like “Rendition” or “Enhanced Interrogation,” Redacted is merely another Great Amerikan Euphemism.

The swinish Bushies will protest, “It’s only a movie!” But even if we negate the atrocities these soldiers perpetrate, the checkpoints in that foreign land are a reality – CAUSING more violence and death than they curb (which Bush and his cabbagehead general, Petraeus, and puppetfool Bremer, refuse to acknowledge). “Over a 24-month period, U.S. troops killed 2,000 Iraqis at checkpoints. 60 were confirmed insurgents. No U.S. soldiers were charged in any of these incidents.”

Even if you consider the majority of soldiers as not criminally insane or unbalanced and just “doing their jobs,” their “jobs” involve performing unnecessarily belligerent tasks instituted in that foreign nation FOR NO REASON. On the basis of lies.

Salazar’s fellow grunts are stereotypes we’ve seen in all these movies before, with one difference – they’re not the heroes. Even more so than in LETTERS FROM IWO JIMA, the American grunts are the villains. Unknowns, so audiences won’t automatically imbue them with screen-love; Patrick Carroll and Daniel Stewart Sherman play Flake and Rush (is he called Rush because he’s fat and ignorant like Limbaugh?), while Blix is a sympathetic Kel O’Neill. Kel Who–? Exactly.

So that when the hard bigotry falls out of these guys, we accept it: “nuke ’em all… scorched earth… sand niggers… ragheads… dwarf Ali Babas…” every insult you’ve ever heard is compacted into this movie.

These grunts have no idea what the bigger picture is – it is not their job to know – yet they don’t even know what their SMALLER duties are. At one point, Rush grabs documents in an Iraqi home, to discern whether “it can help with the war” – while the occupants protest and their translator is nowhere to be found.

Has anyone considered that maybe George W. Bush PLANNED it this way? Not thoroughly of course, but in that bovine, meathead, remedial-reading way he does everything; spreading abject “terrorism” amongst the people whom he believes are responsible for terrorizing the United States. Is he that puny-brained to exact revenge vicariously through innocents? A whole country as charnel house to satisfy the bloodlust of his own latent terrorist streak.

The Amerikan Military and Propaganda Government have dehumanized the Iraqis so morbidly that American grunts feel entitled to these objects as “spoils of war”; premeditating and performing the rape and murder of the 15-year-old girl was just another rowdy frat night for the rapists, even though some of the troop protested – but not enough to actually STOP the incident.

Grunts have been indoctrinated to believe they are performing a FAVOR for Iraq by “overthrowing Saddam, bringing democracy to them – and not even a thank you!” Yet the fact that their christian feet are on islamic soil only increases the hostility – an Arab religious tenet is to keep non-islamic feet off their “holy” land. But George W. Bush will never “get” it.

As revenge for the 15-year-old girl, Salazar is kidnapped and beheaded by Iraqis. But now de Palma shows us the American version of this news, and we see exactly how deluded and in denial the American government keeps itself, as a military spokesman talks of the “barbaric and brutal nature of the terrorists and their complete disregard for human life.”

And though Blix wants to bring charges against his own men, the first thing that comes into question in American courts is the sanity of the soldier bringing the charges. The frustration of this insular system of denial and protectionism will make your head swell and smoke come out your ears.

Ironically, de Palma’s movie ends with redactions that the movie studios made before release, in a last brutal segment called “Collateral Damage – Actual pictures from the Iraq War.” We do not see every picture de Palma intended us to see. But we see enough: children with burned skin, screaming. Families holding their heads, screaming, while their child lies slaughtered on the ground; a man cradling his naked son, covered in blood; splotches of blood all over a screaming child’s dress; a dead woman with eyes wide open, lying in a pool of blood, her limbs removed. This last picture is apparently the Samara girl.

And only one question raises its ugly, swollen weasel head:

WHEN WILL THE GREAT SATAN, GEORGE W. BUSH, BE BROUGHT TO JUSTICE?