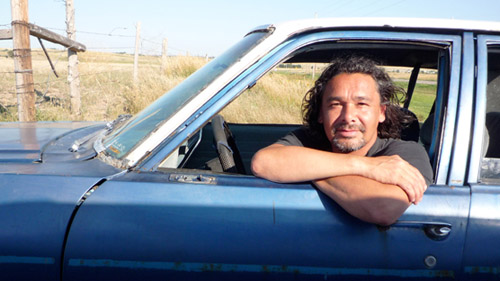 …and they weren’t even Indians. We called them that by accident – and we still call them that! Like, we knew in a month that it wasn’t “Indians” – but we just don’t give a shit. We never correct it!…
— Louie C.K., LIVE AT THE BEACON THEATER, 2011.

Cree filmmaker Neil Diamond dismounts the horse he doesn’t ride and unplucks the headdress he doesn’t wear, to travel into the dangerously racist heart of Hollywood and discover how cinema, since its inception, has shaped the false perception of the American Indian. This documentary goes in search of – and finds – the REEL INJUN.

Now I’ve just called the native peoples of America “American Indians” but they should really be called “Native Americans” if anything, although that designation still retains the name of their murderers in it, and I hate to think of them shouldering that yoke). Their true name is their tribal designation (Lakota, Navajo, Cheyenne, etc.) or collectively just the People. Though REEL INJUN is a very touching, empathetic tribute to the People of the Land, this is my gripe with it – filmmaker Diamond refers to himself and all the People as “Indians.” Though we understand it is used here not in disrespect but as a reference point, it means the ignorance of genocidal jesus-freak Cristoforo Colombo – who thought he had landed in the East Indies – prevails to this day… 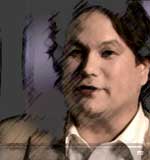 I watched REEL INJUN with tears edging my eyes; a complete people wiped out by the white bastard children of European bastards, then that genocide justified by rewriting history through popular media. REEL INJUN doesn’t cover the Indian mass murders in the name of God perpetrated by Columbus from 1492 onwards, nor concerns itself with the millions of Indian slayings in the name of American progress in the period before the designated “Indian Wars” (first documented in 1776). This doc is not here to shout into the wind about the genocide, yet in its own way, it highlights it, by showing us how movies (made exclusively by White Eyes) worked to either downplay the genocide (with only a few Indians killed in self-defense), deny its existence (Indians portrayed living side-by-side with White Eyes) or justify its execution (by dehumanizing Indians, depicting massacres of White Eyes wagon trains, regarding Indians as “savages” and a hindrance to civilization). 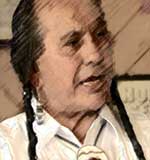 REEL INJUN is a galvanizing gallop through the agitprop-sodden American film industry (which sprang into infancy, coincidentally, during the Wild West frontier era), snaking and shotgunning through the periods of noble savage, to just plain savage, from sensual panther to white woman threat, from spiritual warrior to blight on civilization; taking us from the first Indian penny reel (Thomas Edison’s 1894 SIOUX GHOST DANCE), through the 1930s silent slapstick era, the racist westerns of the 1950’s, the respectful renaissance of the 1990’s, all the way to 2001’s stunning “inside job” ATANARJUAT: THE FAST RUNNER, a film about Indians made by Indians for a world audience, rather than a film about Indians made by White Eyes for White Eyes. 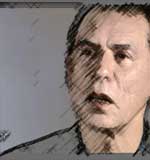 REEL INJUN wends its way through so many filmic indecencies perpetrated on Indian culture, it can be said that while Natives were being killed off literally in the real world, their philosophy, their humanity, their essence was being systematically killed off in the minds of the U.S. populace, to be replaced by simplistic tropes: from the age-old racism of using white actors in Indian roles (Chuck Connors as GERONIMO?! Cree comedian Charlie Hill remarks that’s like Adam Sandler playing MALCOLM X); to Indian attire (only a certain tribe wore headbands and/or feathered headdresses, yet these accoutrement became staples for all tribes); to Indian dialects (sometimes filmmakers would just dub Indians with English audio running backwards); to their very names (Crazy Horse’s Native name does not mean Crazy Horse). Activist Russell Means tells us: “Tašúŋke Witkó does not mean Crazy Horse; he was a great horse trainer,” so it is more along the lines of “spirited horses.” See how the White Eyes turned it into a veiled insult? Even that supposed tribute to Crazy Horse – a sculpture being carved from a mountain in the Black Hills, South Dakota, the largest ever statue to a human – is dubious. And ignorantly ironic. Using explosives to carve a mountain monument, venally creating a tourist trade and despoiling the ecosystem is exactly the opposite of what Tašúŋke Witkó would have desired. And “most experts agree almost every photo of him is a fake” – so it’s not even an authentic likeness! 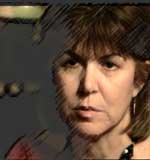 Although the general timbre of American sentiment towards Indians in film was disrespectful, there have always been pockets of dissent through the decades (meaning there were certain characters within the disrespectful films and sometimes singular films themselves affording the Indian respect: 1955’s CHIEF CRAZY HORSE, though it starred Victor Mature in the title role, was actually sympathetic to the Lakota Sioux; Adam West in 1962’s GERONIMO asking, “Why are we fighting them?”; LITTLE BIG MAN’s (1970) empathetic stance towards the Cheyenne nation; Indian Green Beret BILLY JACK (1971) retaliating against corrupt white police with innumerable Spock chops and roundhouse kicks…

The movie STAGECOACH spearheaded the downslide. Director John Ford’s 1939 template for the American western depicted Indians blatantly as a savage, bloodthirsty impediment to American progress and a threat to white women and babies. Jesse Wente calls it “the iconic western… and one of the most damaging movies for Native people in history…” Wente is as vicious in his indictment of Ford as Ford made his Indians, “STAGECOACH summed up and gave the opinion of Native people for decades to the populace in the U.S. – and it’s because of John Ford that they thought of us like that, and that Native people might have even thought of themselves.” 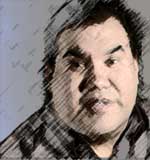 That movie also introduced the “greatest Indian killer in history” – that gun-totin’ white-hatted, hip-swaggerin’, jaw-drawlin’ American icon Marion Robert Morrison (aka John Wayne). I never realized how despicable his actions were until watching this documentary. Why? Because I was as indoctrinated as the rest of humanity to Wayne’s inherent “righteousness” (or “white-eousness”) as the real America. We are shown a scene from THE SEARCHERS (1956) where Wayne shoots a dead Indian in the face so that he cannot pass peacefully into the spirit world. A WTF super-bigot moment for modern viewers, but passively accepted in 1956 when Indians were regarded as the embodiment of evil, backwards, bloodthirsty and white-woman-rapers. Here’s the thing: one might contend Wayne was only playing characters. But in a 1971 Playboy interview, his despicable views were aired quite unequivocally.

Playboy: For years American Indians have played an important—if subordinate—role in your Westerns. Do you feel any empathy with them?
Wayne: I don’t feel we did wrong in taking this great country away from them, if that’s what you’re asking. Our so-called stealing of this country from them was just a matter of survival. There were great numbers of people who needed new land and the Indians were selfishly trying to keep it for themselves.

It only gets worse. Read the full interview here. 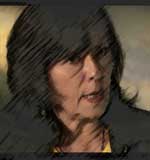 The revisionist nature of the John Wayne era of westerns is unconscionable. They revised reality. This is why I’ve always disagreed with the term “revisionist” applied to the 1990’s spate of westerns portraying Native Americans more judiciously and humanely (DANCES WITH WOLVES, LAST OF THE MOHICANS, et al). Called “revisionist” because they revised the notion of the hostile evil Native; what they were actually doing was RESTORING a semblance of veracity to the portrayal of Natives as fellow humans.

If I have lost all respect for John Wayne, I gained an infinite amount for Marlon Brando. We’ve all heard of him sending Sacheen Littlefeather up to decline his Oscar when he won for THE GODFATHER (1973), on the grounds of mistreating Indians. Up till now, I was unaware of the bigger picture.

In February 1973, the American Indian Movement seized the town of Wounded Knee in a political protest and faced off against armored FBI for 71 days. It was a small scale war. Russell Means was there, “We are prepared to die!” Man, that guy is so REAL! Brando declined the Oscar to protest the U.S. government declaring war on the Indian nations at Wounded Knee (a site symbolic for its previous Indian massacre in 1890). Sacheen gave a gracious and humane speech – then the White Eyes press starts in with “she rented her tribal dress,” “she wasn’t truly native,”… Ignorance born of 100 years of inculcation that Indians were un-human. The final laugh goes to the Indian nations – according to Means, morale at Wounded Knee was flagging and Brando and Littlefeather turned it around with that one symbolic move! 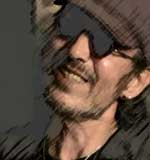 John Trudell Lakota activist (who took over Alcatraz in 1970 in protest) has a long-standing philosophy that overrides any I have ever heard from any political party or activist group: “We’re not Indians and we’re not Native Americans – we’re older than both concepts. We’re the People. We’re human beings. Everyone – even all the white people – were descended from a tribe. There was a time in their ancestry that they wore beads and feathers…” He makes the point that “what happened to them [losing the propensity to wear earth-based accoutrement], they’re now trying to do to us.”

Clint Eastwood recalls his 1976 classic THE OUTLAW JOSEY WALES and his interaction with the mischievous Chief Dan George. (Thankfully, though he’s made some ignorant political choices in his old age, in his early films Eastwood would always go against the grain when it came to attitudes towards Natives, thereby affording them much more respect than his peers; the anti-John Wayne in more ways than one.)

Adam Beach, Sauteaux actor (the Native American Mark Ruffalo) comments on his “drunk Indian” role in Eastwood’s iconoclastic FLAGS OF OUR FATHERS (2006). We see him much younger in clips from Eyre’s groundbreaking film SMOKE SIGNALS (1998).

Iron Eyes Cody is revealed as the Sicilian he is. He was the “Indian” in the commercial with the single tear for the pollution. Entrenched in Hollywood as a Native actor, he was born Oscar de Corte and pathologically retained the identity of the Native even after his older visage shriveled to decidedly goombah. In interviews and public appearances, he kept maintaining he was Native! That jet-black wig on his septuagenarian features didn’t help. His old son has decided to retain that pathology. “I will defend my father’s honor!”

Uh, you do realize that defending an indefensible lie is exactly what the White Eyes have done for 120 years of American cinema?