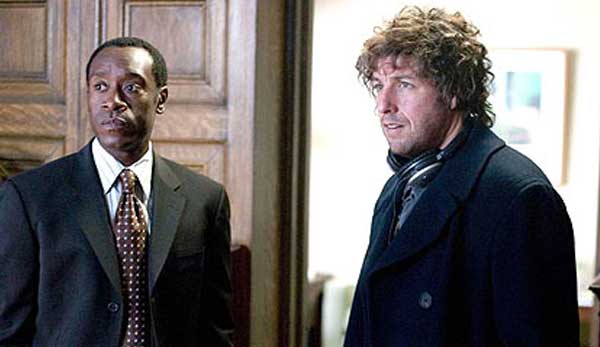 Due to Sandler’s brilliant performance, Don Cheadle was forced to remove his “I’m With Stupid” t-shirt.

When Sandler’s good, he’s very good. (Did I just say that?)

The words Adam Sandler and Acting don’t fit together well. In Mike Binder‘s drama REIGN OVER ME, they – ulp! – do.

Sandler is Charlie Fineman, an ex-dentist suffering Post-Traumatic Stress Disorder after his family died in one of the planes that hit the World Trade Center. He has blocked himself and his mind off from the world. A college dentist friend, Alan Johnson (Don Cheadle) finds Charlie in this mentally and physically bedraggled state, tooling around New York on a motorized scooter, and tries to bring him back to Life.

Other characters orbit around the tentative relationship Alan re-forges with Charlie (Jada Pinkett-Smith as Alan’s wife, Mike Binder as Charlie’s lawyer, Liv Tyler as a psychiatrist, Saffron Burrows as a randy dental patient and contrived love interest, Donald Sutherland as a deliciously imperious judge) – but Sandler The McActor outshines them all! Call the white coats on me if you must…

We can’t take our eyes off him. He is unshaven, disheveled, his mind wanders, his emotions are disjointed, he plays video games while remodeling his kitchen over and over again; he constantly wears headphones, listening to ’70s rock albums, notably Springsteen’s The River and The Who’s Quadrophenia (featuring the song, Love Reign O’er Me – we hear The Who version during the film, Pearl Jam’s version closes the credits); he even shows off his drumming talent. His performance never flags; as pressure builds from his growing orbit of characters to face the past and rejoin society, his resistance is passionate.

There is a point where he tries to commit suicide by pointing an empty gun at a policeman, hoping they would shoot him down. At this point, we might have stepped back and said, “Hey, it’s only Adam Sandler – shoot him and be done with it.” But the misery in his eyes has subsumed the character and taken him way past Sandler into actual Acting.

REIGN OVER ME forces me to realize I don’t “hate” Adam Sandler. He’s a spectacular businessman and a good actor. I just hate the characters he plays onscreen. I hate that most of his movies are wasteful exercises in poorly executed jokes and opprobrious messages, catering to a niche that doesn’t realize it’s too dumb to appreciate his real talent.

Here his real talent is on display. Writer-director Mike Binder (the mind behind THE MIND OF THE MARRIED MAN) may be accused of making Charlie too obviously pitiful, and therefore manipulating us into empathizing with him (after all, a person can have PTSD without invoking 9-11), but the script tiptoes around the “event” so ambiguously (“his family died in a plane crash”), it does not seem like exploitation.

Until Charlie gives his tearful monologue recounting the day of “the accident” – the last angered words to his wife, the undecided kitchen color, his three little girls and the family dog (pouring it on, pouring it on) – delivered with such conviction I can’t imagine a dry eye in the house. Even though we know it’s a stacked deck. Who doesn’t have sympathy for a 9-11 widower? (He even escapes prosecution for threatening the policeman due to that magic Get-Out-Of-Jail-Free date.) But Sandler pulls it off. No maudlin hero talk, no Go USA, no politics; he reins in his performance until he spills the monologue, and when he does, it is heart-wrenching, not for the story – for the acting. Yes, it is manipulative, but ALL movies are manipulative – some just disguise the strings better than others.

REIGN OVER ME asks: How much intrusion into another person’s life is considered socially acceptable to aid their recovery and at what point do the helpers turn into the neurotic ones? Charlie’s in-laws (Robert Klein, Melinda Dillon) take him to court to force him to face the memories of his dead family; to start re-leading a “normal” life. Is facing the grief humane, or is being forced to face it inhumane?

Only a True Actor can portray this profound paradox. Cue – ulp! – Adam Sandler?…