Another good scientific story sacrificed to Hollywood’s Lowest Common Denom. THE RELIC finds a field researcher dabbling in tribal drugs on the dark continent shipping a crate containing a strange fungus back to his lab at the Chicago Natural History Museum. Also in the crate is a relic of an ancient god that could supposedly transform into a monster to ward off enemies. What this has to do with bizarre murders at the museum, involving sucking out the victims’ hypothalamuses, is where science and pseudo-bullshit collide. 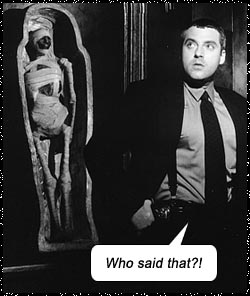 As do Detective D’Agosta (Tom Sizemore, all Chicago mob ‘tude) and evolutionary biologist Dr. Margo Green (Penelope Ann Miller, all slinky waistline). He wants to close down the Museum to find the killer, who may be lurking in the subterranean crawlspaces, while Margo’s boss (diminutive Linda Hunt) wants to keep the Museum open for a gala for political dignitaries.

We’ve seen this flow chart before. The people who don’t believe – die. And of course, innocent bystanders die – because they’re working too late, because they walk into dark rooms without turning the lights on, because they insist on trying to escape through a sewer chest-high with water, because they’re too far down in the credits…

THE RELIC is a formulaic quickie from mediocre director Peter Hyams; a linear, straightforward monster movie with good scares, good tension and not revealing too much monster in the first act. That being said, it could have been tighter, as Hyams seems to have shucked off the science and storyline of what appears to be a very interesting novel by Douglas Preston and Lincoln Child – Relic – and replaced it with thriller movie convention. I mean, with four screenwriters, they’ve even got the cat jumping out at us from a cupboard, in a jump-scare attempt. Yeah, someone actually wrote that into a screenplay without being sarcastic or ironic. It didn’t help that the lame acting for the subplots (especially Chi Muoi Lo’s atrocious line-reads) made us wish more people would get eaten more quickly.

There is an underpinning of science to this whole escapade, where DNA identifies the killer as not quite human, a mutation with other genes spliced in. This, of course, encourages ignorant talk about “evolution” – a precept that no one on this film understands, least of all the writers and director. “It’s rapidly evolving into something else!” No, it’s mutating. One solitary creature cannot “evolve.” The creature feeds off hormones in the human hypothalamus; chilling sequences where bodies are found decapitated with the brains sucked out – which sparks more scientific conversation sprinkled liberally with dumbo-jumbo. So though the movie has some visceral scares, it is tempered by everything around those moments.

The problem with the pseudo-science is that it leads to nothing: Uncovering the mystery of the beast doesn’t lead to an understanding of how to kill it, capture it or study it. It’s pretty much on the chopping block with guns and explosives from the get-go, no matter what it’s composed of – shyeh! Real “scientists” you got here! It was just a device to run from and to blow up in a fiery finale. While eating a lot of people along the way.