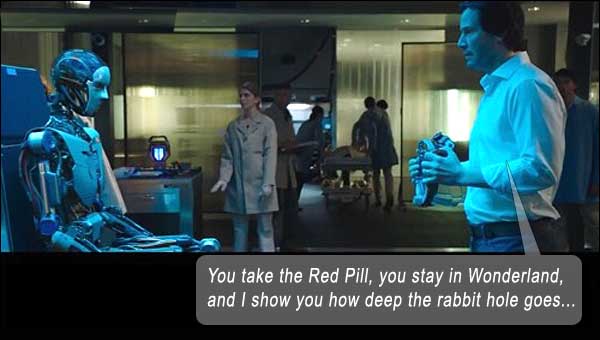 Movie clone of a clone movie.

So it’s not cool enough to call them “clones” anymore? Now we call them REPLICAS.

Keanu Reeves fulfils the role of mad scientist in this modern FRANKENSTEIN meets PET SEMATARY tale, where he tragically reconstructs his dead family after a fatal accident.

We meet bio-engineer William Foster (Reeves), as he and his team try to transplant the brain signals of a volunteer dead soldier into a robot body. Turns out the transfer of signals is the easy part – the hard part is convincing the robot that its human brain is alive again in a non-human vessel. It tears itself part.

Transfer of consciousness is nothing new in cinema today (ROBOCOP, THE MACHINE, CHAPPIE, the two Ryan Reynolds movies SELF-LESS and CRIMINAL, etc.) and each new dive into the trope is handled with varying degrees of introspection; REPLICAS has so much potential, and touches on it in brief moments (like when his son’s hand twitches and misses the cereal bowl, his wife lamenting not remembering last night), but instead of any mighty sociological statements, the movie opts for the easy saccharine.

With Foster’s ominous boss (John Ortiz) breathing down his neck to cancel the project, Foster and his colleague Ed (a solid supporting performance by SILICON VALLEY’S Thomas Middleditch, displaying just the right amount of tragicomedy) find a method to surreptitiously clone his family with company property while also making his robot soldier viable.

We’ve grown so inured to outrageous science fiction plots that we don’t realize how far into insane someone has tipped to consider bringing their family back from the dead! The movie treats it like the stakes being high (rejuvenating his family all with proper brain functions and memories) is the important issue here – yes the stakes are high but he’s bringing his family back from the dead! This was considered mad scientist territory just a few decades ago.

A heartbreaking setback when Foster must decide which one of his four family members he cannot bring back, due to there being only three generating pods. This plot point too is mind-bending in its implications: Foster must set about wiping the youngest daughter’s memory from his family’s brains. But it is not as simple as the movie makes it seem. They might throw in this humorous sequence where Foster answers all his families voicemails, texts and emails, but just replying to friends that your dad grounded you, or telling the school you’ve decided to home-school the kids isn’t going to account for the three weeks they were absent from life. It’s also not going to stop friends and acquaintances asking about the missing daughter. And what about the missing daughter’s teachers and healthcare and tax forms and …

When Foster is seen wiping the youngest daughter’s memories from his family, he has totally tipped into mad scientist territory – but the soundtrack tells us otherwise, a slow lullaby making him look like a tragic hero for sparing the memories of his family, as he weeps at her last echoes disappearing. 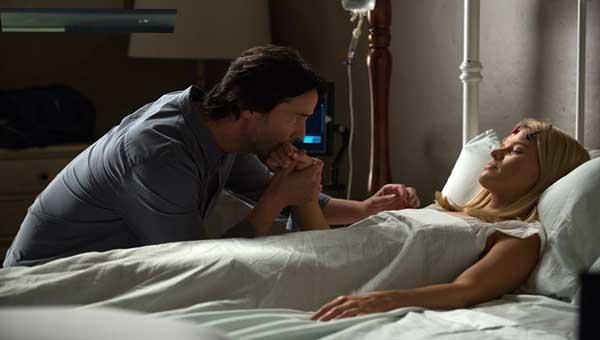 When wife Mona (Alice Eve) discovers she is a replica, there is very little introspection; I thought they might follow some intriguing trains of thought, like her lamenting that her memories with John Wick weren’t really hers, or pondering on whether she was a better lover than her original, etc– but no, apart from being a little vexed that Foster would ‘take the memories of my daughter from me?” she’s pretty much accepting of her status with no questions asked. By this time, though, the movie is poised to move into Action Movie Third Act, so no more thinking allowed.

When Thomas Middleditch is killed, I understand the plot importance (if he gave up the family once under pressure, he would likely give them up again; there could never be a clean break to start anew), but his death reminded me of Richard Schiff’s in JURASSIC PARK THE LOST WORLD. He was a likeable character, whose expertise created Foster’s family clones; he was nothing but supportive of Foster, through all the mad scientist shit; like Richard Schiff, he was trying to keep his friend out of trouble – his reward? To get eaten by two tyrannosaurs.

The resolution of Foster’s robot experiment is very satisfying, as this movie takes the path that all those LAST JEDI complainers wanted Luke to take – appear in the final showdown as a powerful avatar and kick some ass.

Keanu’s performance is pretty emotional, the 3D computer graphics are legit, and the movie sparks along at an enjoyable pace where you might not even consider all the heavy cerebral and sociological implications of Fosters maniacal acts. But REPLICAS can’t raise itself above B-movie, and ends up just an inferior clone of all its consciousness-transfer brethren.