REPTILICUS, Denmark’s one and only daikaiju movie, is the Danish answer to Japan’s GODZILLA (1954). But whereas GODZILLA was a magnificent parable of man’s hubris toward nuclear abuse, REPTILICUS is about a puppet.

There were only two Godzilla movies released at the time of REPTILICUS (1961) – the first was Ishiro Honda’s original masterpiece and the second was the informal sequel, GODZILLA RAIDS AGAIN (1955), which started the trend of Godzilla goofiness. REPTILICUS doesn’t even put a guy in a suit, opting for a snake-like puppet and environments made from tiny models that look like tiny models. (When we view the original GODZILLA, we now see how much care was taken in the craft of model-building in that movie.) REPTILICUS is a blasphemous embarrassment – for the Danes, for the filmmakers, and for puppetry.

Ib Melchior writes a screenplay where a giant tail and some bones are found during a Danish oil drilling expedition, led by blond underwear model Svend Viltorft (Bent Mejding). The specimens are brought back to a lab, and found to be regenerating. Much like a lizard or a starfish grows back its tail or its whole body, this reptile-like creature is growing back into “the biggest dinosaur that ever lived.” It escapes and breaks Copenhagen, while the head scientist from Labcoats Make The Man, and an over-enunciating general from Actors R Us, lead the mighty Danish army [snigger] to combat it, eventually drugging it into a coma.

Sidney Pink displays his lack of directorial prowess by populating his film with bad actors, overactors and non-actors, all “indicating” their emotions furiously, all standing breath-mint close to each other in the frame while discussing tactics or events, invading each others’ personal space like a Labrador in your crotch, all treating women with cringeworthy sexism.

Maybe it was the pointy bras, but no women deserved this kind of insidious sexual harassment. Old Professor Martens (Asbjorn Andersen) veritably leers at a busty blond woman from UNESCO (Marla Behrens as Connie Miller): “We’re not accustomed to see such a beautiful woman connected with science.” Oh God, really? On top of that, Connie must now remind old fogey Martens that she is, in fact, competent at her job: “I assure you that I am quite capable in my field.” Cringe. He might as well just look directly at her pointy bra and talk.

Even the filmmakers are blithely unaware that the script itself is swimming in sexism: General Bigmouth (One-Expression Carl Ottosen) is told by Connie that a drug can be used to dope the monster into unconsciousness – and what does he do? He turns to a male soldier and orders, “Get me someone who knows about that drug!” Uh, sir, the person who knows about it just told you about it. It’s that woman thing with the vagina and everything, assface! Meanwhile, Underwear Model is in on all the action, even though he’s contributing nothing to progress the fight against Reptilicus except his devastating good looks. Bigmouth wants to head over to the lab to cook up the drug, and the girls must practically give Underwear Model a handjob, begging to be “allowed” on the mission, even though they are the ones who know how to cook up the drug!

And this kind of indoctrinated, ingrained, taken-for-granted sexism is prevalent in practically all media prior to the 2000s. No wonder women hate men so much.

Dirch Passer was a reputed comedian at the time, and was hired for the movie to splash a bit of levity over the supposedly grim destruction movie. He’s Petersen the caretaker, who puts his hand in an electric eel tank and tries to react as Harpo Marx might react. But he’s no Harpo Marx. And the question arises as to whether he’s actually a comedian. 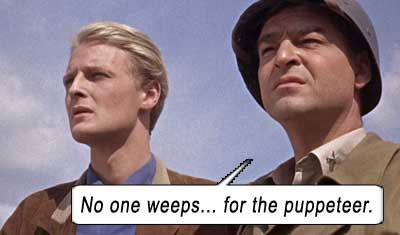 Connie, who believes No Expression is the Best Expression, makes some kind of pass at Bigmouth, telling him it’s past 10 and he should get to bed, while her pointy bra is working overtime touching his shoulder. He doesn’t take the bait. Matter of fact, even though Martens’ two daughters (Ann Smyrner and Mimi Heinrich, who both can’t quite out-act their pointy bras and beehive ‘dos) make googly eyes at Underwear, there is no evidence in this movie of premarital sex (you know, the type that Christian Sarah Palin’s family loves so much), and Bigmouth seems to be finding excuses not to slip out of his gargantuan tie-up military pants to sweat on Connie’s dead expression – but we hear that the novelization of REPTILICUS (by Dean Owen) was so steamy with gratuitous sex that director Sidney Pink sued the publishers. Out of jealousy, I’d say, because it was actually interesting and realistic, unlike his movie.

There is one mildly intriguing conundrum raised when General Bigmouth is ordered by Prof. Martens NOT to blow the creature to bits, because each bit can regenerate! The General says stupid things, like, “I’m not a scientist – I’m a soldier. That’s the only way I know how to kill!” Yes, but why are you arguing with the guy who IS a scientist, and telling you the solution? And in the climax, we can see the filmmakers trying to create a moment of noble sacrifice, when Captain Brandt drives into the maw of the monster to distract it while Bigmouth shoots a drug into its mouth. How precious! You’re really trying to wear big boy pants, aren’t you, Movie?

Monster roars, shoots acidic green liquid (a precursor to ALIEN? Uh, no), people running in streets, drawbridge rises, people fall off, drawbridge operator overacts so much, I think the filmmakers kept this take in the film because it was funnier than Dirch Passer’s so-called comedy; soldiers shoot, the navy depth-charges a sleeping puppet, monster pulled on string through model houses, people watching and not reacting, linear plot with cliffhanger ending, as we see a broken-off foot of Reptilicus on the ocean floor, throbbing…

There is no lesson to be learned in this movie, except maybe Don’t Hire Dirch Passer.