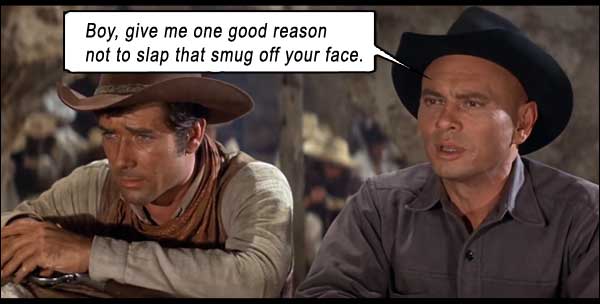 Magnificent Yul and the Six Dexters.

You know how when you make a copy of a copy, it’s not as sharp as… well… the original.
— Michael Keaton as Doug #3, MULTIPLICITY

THE MAGNIFICENT SEVEN was such a worldwide hit, a sequel had to come. But… uh… almost everyone died in the first one. How could there possibly be a “Return” of the Seven? A return of “a” Seven, maybe, but surely not THE Seven – unless we’re talking zombies. Then again, how could a new Seven “return” if they were not here the first time? And the movie’s biggest mistake of all: not even the guys who lived returned for this sequel!

The Mirisch Production Company (and star Yul Brynner, the only one of the Seven to reprise his leader role, who had quite an executive producer’s hand in his movies) figured that a new cast would probably go on to the same fame and manliness that McQueen, Bronson, Coburn, Vaughn and Horst were enjoying from their MAGNIFICENT bump. It’s no secret this movie was trying to recapture lightning in a bottle. Using a thimble…

In MAGNIFICENT, there was one cowpoke that stood out like a sore square amongst the cascading cool of the six others – doughy Brad Dexter, who hailed from a generation prior to the other six, with all the charisma of an uncle who wore his pants too high. And in RETURN, Yul somehow found six others all with the charisma of Brad Dexter…

Guess he didn’t want all those ego problems he experienced with the manly mens from MAGNIFICENT. (In the DVD Commentary of THE MAGNIFICENT SEVEN, the tales of Yul’s annoyance with the others’ scene-stealing are legendary: a story is told of the Seven crossing a stream on horseback, Yul regally taking up the lead position, while – behind his back – McQueen scooped up water with his hat to wash his face, Bronson unbuttoned his shirt to flash his chest and Coburn, as they put it, “played three acts of Hamlet” too.)

Director of no note, Burt Kennedy, cannot retain the majesty that director John Sturges bestowed on the stars in MAGNIFICENT. Yes, there are some interesting camera moves (like the tracking shots on many horse riding scenes), and yet there are some stunningly inept sequences (like Manuel stabbing the bull) that make us realize he’s a rank TV goofball. Also, TV writer Larry Cohen simply plagiarized the premise, all the plot points, the flow of the narrative, most of the dialogue and all the gunfights and horses and haciendas from THE MAGNIFICENT SEVEN. Absolutely everything is begged, borrowed and stolen from this film’s predecessor.

Everything except the cool.

Composer Elmer Bernstein came along for the ride, and his soundtrack tries to save this tepid production. We are used to hearing the exact same soundtrack over a series of movies such as the STAR WARS franchise, but was this the very first time the exact same soundtrack was used in a sequel? Unfortunately for Bernstein, this same score that lent elegant wings to THE MAGNIFICENT SEVEN is brought crashing to Earth by being associated with this uninspiring, tinker’s cuss of a movie. I mean, it’s the same music! Why does it sound so mundane all of a sudden when wrought under these vapid, pedestrian gun-smokers?

In the grand tradition of “This time it’s personal!” Chris (Brynner) goes after a Mexican bandit named Lorca (Emilio Fernández) who is kidnapping whole villages of men for slavery, because one of Chris’s friends is in that haul – the young upstart from MAGNIFICENT, Chico. Well… not really. Horst Buchholz doesn’t reprise his role; instead, it goes to an actual Mexican dude who can’t act (Julian Mateos), let alone bring a spark of youthful energy. Even Chico’s wife has been replaced.

And Vin, Steve McQueen’s character from MAGNIFICENT, has been replaced by non-entity Robert Fuller, whose eyebrows are as smug as Robert Vaughn’s whole face. The movie pretends like hell that these are the original actors, but no one – absolutely no one! – is buying it, not even the actors. Yul speaks to them like he’s reading a phone book. And they reply by fax.

To be fair, McQueen turned down the offer to appear, for whatever reason his small-minded agent gave at the time.

Ask Yul to forgive me. I was always grateful for what he did. He completely changed my career and my life [referring to being cast in MAGNIFICENT SEVEN]. I wouldn’t appear in RETURN OF THE SEVEN and I never saw him again. Tell him I did wrong, and I’m sorry for it. I never stopped feeling bad about it, because there’s no doubt that THE MAGNIFICENT SEVEN is the film that made me a star. And I never did forget that, or forget him.
— Steve McQueen, speaking to Yul’s son, Rock (from “Yul: The Man Who Would Be King” by Rock Brynner, 1989).

The Seven day-players pretending to be stars include: Warren Oates as Colbee the ladies’ man (the Walton Goggins of his era), Claude Akins as Frank the big dumb gorilla, Virgilio Teixeira as Some Guy, and Jordan Christopher as young grifter Manuel with Nowhere Else To Go.

They ride into the old village square with the steeple, where Horst rang the bell to call out the villagers like a boss. Yul: “I never thought I’d come back!” It’s meant to conjure sweet memories, but it lands with a dull thud. Yul somehow delivers the line like he hoped he’d never come back. His face looks too lined to be doing this shit anymore. In reality, it’s six years since the last film. Yul is 46. But he looks like he’s aged ten years since MAGNIFICENT. Is this why the script makes it “ten years” since he was at the village? Did the filmmakers slyly write that line in, because they knew he looked ten years older, but no one wanted to say it to his face?

The film tried its best in casting Fernandez as Lorca; he was reportedly “the most famous person in the history of Mexican movies” (according to imdb, at least). But he is not the international star that Eli Wallach was. So though he may have had some resonance with audiences of the day, his legacy is forgotten in this modern age. And he sounds suspiciously like he’s being dubbed by Paul Frees, the legendary voiceover actor of cartoons and B-movies. We can see Fernandez giving an intense performance, but his dubbing does him no justice, sounding like a white actor doing a Mexican actor reading a phone book. He’s got a psychopathic reason for kidnapping men to build a church on the site of his sons’ deaths, but it just seems inane when explained by faux-Frees.

RETURN OF THE SEVEN would be Yul’s last time as Chris Adams, but it would not be the last time he dons the all-black cowboy outfit. 7 years later (– SEVEN!!) the filmmakers of WESTWORLD would deck him out to look exactly like Chris, as the robot Gunslinger run amok.

During the final gun battle staged like a school play, almost all the Seven die. Again. But this time, no one cares.