The Road To Nowhere leads straight through Suburbia…

Most men lead lives of quiet desperation and go to the grave with the song still in them.
— Henry David Thoreau.

Leo and Kate–together again! For those emotionally trigger-happy TITANIC fans who thought REVOLUTIONARY ROAD would be a reteaming of their favorite star-crossed lovers to recapture lachrymose memories (like the manipulative reteaming of Hanks and Ryan time and again to retread the same mindless romcom ground), this movie’s first scene should dispel any of those flighty notions: Leo and Kate as husband and wife at each other’s throats, arguing like the best of us in real life, their confrontation almost degenerating to physical violence. 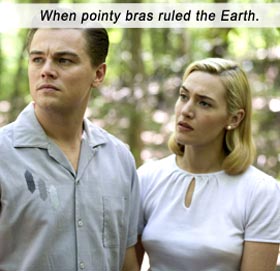 Tonally diametrically opposite to their weeping willow roles onboard the RMS Titanic, we meet the marriage-challenged Frank and April Wheeler (DiCaprio and Winslet) in 1950’s Connecticut, living in an average Middle American suburb on Revolutionary Road, her dreams of being a successful actress slowly dying in cruddy stage plays, his dreams of migrating to Paris being quashed by financial reality.

I must admit to initially bracing myself to cringe throughout REVOLUTIONARY ROAD, expecting implausible promises of eternal love wafting like indiscriminate farts across a landscape of painfully pretty pusses. But we soon realize this is not a lank romantic excursion into platitude land. This is what would have happened had Jack and Rose lived to kiss dry land. Whereas marriage and settling down is usually regarded as the goal that young couples strive towards, when this couple achieves that goal they realize it is more nightmare than dream.

Of course, we’ve encountered many films from all eras that feature dissatisfied people, especially in more ambitious European cinema. But 1950’s Americana has always been a Norman Rockwell haven, where the very rut that would define later disenfranchised generations was promulgated as the highest aspiration for young dreamers: settling down in suburbia, white picket fence, aproned housewife, cubicled husband, two-point-five kids, the dog, the car, the neighborhood barbecue, the weekend hammock…

In movies made in the 1950s, all those innocent, soft-focused American 35-year-old “young lovers” tilted at nothing else, because all the entertainment media, the church and the agrarian communities were spinning the state of marriage stagnation as THE goal. But Frank and April are constantly trying to find ways out of this endgame. Because they’re bored. Because they’re human.

Is REVOLUTIONARY ROAD the first “1950’s revisionist” romantic movie? From the 1961 novel by Richard Yates (screenplayed by Justin Haythe, directed by Sam Mendes), Frank and April could be the first realistically portrayed couple of the 1950s since American movie-making began! Leo and Kate pull out all the stops with nerve-raw performances that make us wonder how they ever came out of this as friends.

For every LEAVE IT TO BEAVER household in the nostalgic ’50s, surely there must have been perceptive, questing humans like Frank and April, who felt there was more to the quality of life than obeisance to the repressive Industrial Age existence foisted upon them; their quiet desperation inciting them to rebel against the contrived conventions of BEAVER-type propaganda. And Hugh Beaumont.

April even rages quite explicitly, “Look at us – we’re just like everyone else! We bought into the same ridiculous delusion – this idea that you have to resign from life and settle down…” She considers her life a derailing of dreams, rather than acquiring of them.

Kathy Bates (who co-starred with DiCaprio and Winslet in TITANIC as an annoying old lady) co-stars with DiCaprio and Winslet as an annoying old lady. She foists her mentally-unbalanced son (Michael Shannon) on the couple, but he turns out to be just a person with no verbal inhibitions (in other words, truthful – what “civilized” society cannot comprehend, so deems unbalanced), who becomes a loudmouth conscience for the couple.

The movie’s stinger is a biting commentary on how to make a marriage last into its autumn years: Kathy Bates and her husband sit around a hearth, he reading, she yapping. When she starts nagging about the Wheelers, her old husband surreptitiously turns down his hearing aid; we see him in medium closeup, his face an ambivalent stare, as we hear her nagging fade down to silence. Is this it? Is the movie telling us that to make a marriage “work” (which, we presume, means to stay married past the point of caring) we must tune out the other person? And if it is, what a horrifying, claustrophobic existence! Gentlemen, if you are partnered right now, even at the most platonic level, you know that you “tune her out” at every opportunity just to stop your head from exploding with inanity. Imagine doing that for 30, 40, 50 years…

The nuclear family ideal is so ingrained in Middle American culture that when Frank and April tell their neighbors they are planning to move to Paris, with April supporting the family instead of Frank, they cannot process the information. They are so inculcated by societal strictures that outwardly they smile and say “That’s nice!” while in private they dismiss Frank and April as lunatics.

Wait till Hugh Beaumont hears about this!