Like Richard Pryor, let’s get straight to the point: if you are a spineless, politically-correct, programmed W.A.S.P. drogue who quails at the words motherfucker, shit, or nigger, keep pretending there’s nothing beyond your Disney Gold Membership Pass and stay away from this movie. 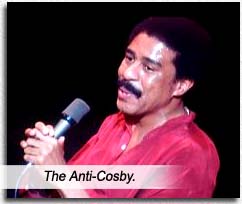 In this modern era of hack comedians packing concert halls like rockstars (John Pinette, Paula Poundstone, Ralphie May, Larry the Cable Guy), we must remind ourselves of the savage historical context behind RICHARD PRYOR: LIVE IN CONCERT. Not only was Pryor a pioneering comic (one of the first stream of consciousness stand-ups who didn’t rely on structured stories and snare-hit punchlines to get guffaws), he was a pioneering BLACK comic. Though he was filmed in 1971 for LIVE AND SMOKIN’ (released in 1985), this 1978 performance in Long Beach, California is arguably his first and best onscreen barnstorming.

Red silk shirt, black bellbottoms, frenetic, energetic, youthful and vital, as street-hardened as the Peoria whorehouse he grew up in, Pryor reels through analyses of white people versus black people, cops not letting him kill his car, heart attacks, his pet monkey getting raped by his pet dog, John Wayne kicking Death’s ass, his father dying during sex with an eighteen year-old, deer hunting, sparring with Muhammad Ali, proving to his woman he is “Macho Maaaan” – and a host of other classics and not-so-classics (when comedians start in on pet stories, they lose me), with dead-on mimicry and raptor delivery.

Before Eddie Murphy made swearing onstage a staple; before Chris Rock’s attack-dog style, before Sinbad telling us “black people be different than white people”; before Dave Chappelle pushed envelopes – here was the Original: Rawer than Eddie Murphy, Bigger and Blacker than Chris Rock, more Brain-Damaged than Sinbad, Killing Them Softly by pushing the envelope over a cliff with everyone – honkies and niggers both – screaming for mercy.