Was Richard Pryor the first Black Comedian? Yes, there was Cosby before him, but Bill Cosby – even though technically a black man – was a white comedian. Prior to Eddie, Martin, Morgan, Sinbad, Tucker, Rock – there was Pryor. 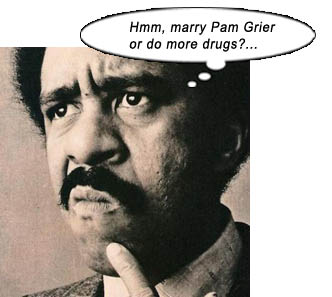 RICHARD PRYOR: OMIT THE LOGIC is a 2013 retrospective of the hard life and harder times of revolutionary black comedian Richard Pryor (1940-2005), from his upbringing in a Peoria brothel (where his grandmother was the madame and his father and uncles were pimps), through his halcyon days as stand-up comedian, writer, TV star, movie star, director, wife-collector, junkie, burn victim and ultimately multiple sclerosis victim. It pulls no punches and asks no apologies. It’s like one long BEHIND THE MUSIC episode with an extra helping of “Then tragedy struck…” (Some may opine that tragedy is the essence of these bio-docs; sells advertising…)

OMIT THE LOGIC shows Pryor at his hilarious best and his damnable worst. An influence to many, if not all, black comedians (as Damon Wayans notes, “If you didn’t steal nothin’ from Richard, you probably ain’t that funny anyway”), the controversial firebrand Pryor started as a clean-cut establishment kid in the early ’60s, trying to be Cosby. He made it to Vegas that way. And then one night, he just started swearing onstage – and got fired. From that night, he became Richard Pryor: if he couldn’t do it his way, he warn’t gonna do it at all.

Probably the only person before Pryor who brought the ferocious street into the tame vaudeville atmosphere of standup comedy was Lenny Bruce (1925-1966), whose career had flamed out by the time Pryor was finding his feet. Even a white man couldn’t attack the system that hard and live. Riding that self-destructive wave, now came a black comedian fighting that establishment every step of the way, with all the same demons. Pryor exposed his deepest darkness to the stage, in routines liberally sprinkled with fuck, shit, motherfucker, kiss-my-black-ass and, of course, the word that apparently cracks mountains and freezes suns – nigger. When they deigned to make him the star of his own TV Show they wanted castration in return, and when Pryor performed a sketch showing how he tows that line – we see him naked with a Ken-doll smoothness where his penis should be – the network cut that sketch! It seems that every episode was a constant battle between Pryor and the network over content and censorship. Pryor fought the good fight, going down in the end, of course, but going down black and proud.

There is much coverage of Pryor’s “epiphany” when he visited Africa and realized that “there were no niggers there,” that no one was a nigger when everyone was one, that it was a debasement of the highest order, vowing never to use the word again, and actually sticking by that vow.

Fascinating and fast-paced, outlining Pryor’s numerous LP records (his third release, That Nigger’s Crazy (1974) would win a Grammy, and hit #1 on Billboard charts for four weeks), and many of his forgotten and smaller films that still resonate to this day (WATTSTAX, WHICH WAY IS UP?). His commercial releases like BREWSTER’S MILLIONS and THE TOY are signals that Pryor had become Whitey’s bitch. When we see that old footage of Pryor, eyes ablaze, calling Chevy Chase “Honky!” and then in reply to Chevy’s cry of “Nigger!” righteously retorting “Dead honky!” we remember his original fire, and tend to agree with how those later movies castrated him almost without his knowledge.

Doc features interviews from Pryor’s closest (if his many ex-wives and former girlfriends can be called that) to his business colleagues (lawyers, managers, etc.) and fellow performers and contemporaries, like Jesse Jackson, Robin Williams, Bob Newhart and Paul Mooney. Listed as “Wife 5 & 7,” Jennifer Lee Pryor is especially featured, as is writing partner Mooney.

Mel Brooks muses on his quintessential western parody BLAZING SADDLES (1974), on how Pryor was the first choice to play Sheriff Bart (surely that would have been monstrous hilarity, but honestly, Cleavon Little does such a bang-up job, we can’t see anyone else in that role now); on how Warner Bros. studio execs with tiny mouse-hearts were too fearful of Pryor’s onstage marauding to allow him a feature film platform, relegating Pryor to merely a job as co-writer. Pryor created the Mongo character and Brooks smiles over Pryor’s line for Mongo, “Mongo just pawn in game of life.”

Growing up knowing of the three blazing Gene Wilder pairings with Pryor (SILVER STREAK 1976, STIR CRAZY 1980, SEE NO EVIL, HEAR NO EVIL 1989), I always wondered at the reason why Pryor was not on the scene earlier to do SADDLES with Wilder. Now I know why, and we also know that had Brooks won the battle for Pryor, there would be 4 out of 5 good Wilder-Pryor comedies, rather than 3 out of 4 (ANOTHER YOU 1991 is a sad flop, not least because we can see Pryor’s MS getting the better of his comedy).

I’ve always considered Pryor’s concert film LIVE ON THE SUNSET STRIP (1983) not as gritty as LIVE AND SMOKIN (1971) and not as funny as LIVE IN CONCERT (1979), and we find out that the SUNSET STRIP footage is actually the second night performing that set, having bombed miserably the first night, inauspiciously leaving the stage early after apologizing to the audience, uncomfortably admitting “this thing we’re trying to get going is just not working.”

Pryor’s tragic last years would see him become wheelchair-bound as the MS eats at him. Documentary closes with Pryor hoping how he’d like to be remembered: that he would bring joy to people speaking of him, that they’d have a funny story/lie about him, or something that would just make them laugh. Despite all the tragedies he suffered (including a self-admitted suicide attempt where he set himself on fire), all one needs to do is watch one of his routines and his wish always comes true.