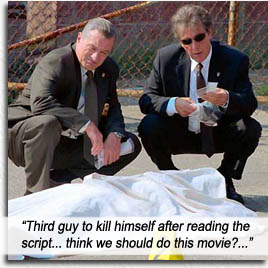 RIGHTEOUS KILL re-unites Robert de Niro and Al Pacino as two New York cops on the trail of a killer who is wiping out the city’s vilest criminals. The plot of MAGNUM FORCE resurrected, except in this movie, it’s Dirty Harry without the Dirty. Or the Harry.

While Pacino and De Niro turn up and wisecrack at a rash of murders where the killer leaves behind a saucy poem every time (hence, dubbed the Poetry Killer – can I get another pitcher of Obvious Ale over here, thanks?), suspicions arise within the force as to the killer being De Niro. The New York police force, by the way, seems to only consist of four other people – smokin’ Carla Gugino, snappy John Leguizamo, languid Donnie Wahlberg and unintentionally funny Brian Dennehy.

I’m sure director Jon Avnet thought he’d scored his GODFATHER breakthrough when De Niro and Pacino signed on to this uninvolving murder mystery. I could see visions of sugarplums and THE GODFATHER PART IV dancing through his head – if not for the bland dialogue, limp setups, one-dimensional characters, and a twist so obvious that if you can’t figure who the killer is within the first ten minutes, you’re not getting enough blood to the brain. 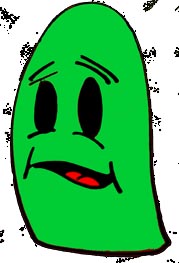 Written by Russell Gewirtz (obviously with help from a thirteen-year-old who thought the “twist” was cool and original), there is no chemistry at all between the two leads, even though they are quite obviously friends offscreen with decades of legacy to lean on. De Niro is looking pretty old, Pacino, even older. Every time they make their famous facial expressions, it just seems like they’re doing Robert De Niro and Al Pacino impersonations.Neither actor is at the top of their game (Pacino was nominated for a Razzie in this role), and the mixed up script doesn’t save them; what the director and writer think is misdirection is merely handing us plot giveaways on a platter.

At least we can laugh at Ajay Naidu (OFFICE SPACE) in his Indian doctor cameo – he’s not really trying to be funny, it’s just that priceless Indian accent. And Brian Dennehy – well, he’s been unintentionally funny since F/X – MURDER BY ILLUSION (1986).

20 years ago, Robert and Al starred in a powerhouse that established them as O.G.s (THE GODFATHER PART II, 1974), but they had no scenes together to showcase their overlord acting skills; twenty years later, they starred in the vapid HEAT (1995) sharing one major scene with above average acting; now thirteen years later, they share almost every scene in RIGHTEOUS KILL and there is no acting to speak of.

I think there’s a clear message here: for these dudes to stay righteous, You gotta keep ’em separated!