A planet where apes evolved from James Franco? 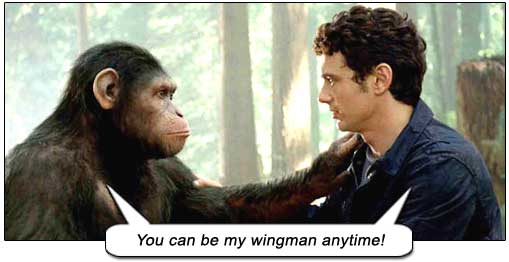 Boldly flinging feces in the face of canon, writers Rick Jaffa and Amanda Silver have crafted a new beginning for the Ape Who Said No. Cast your mind back to CONQUEST OF THE PLANET OF THE APES (1972), where Ricardo Montalban exposits the backstory on how apes were kept as pets by humans, after a virus wiped out dogs and cats; and how those pets devolved to slaves, until they revolted. Director Rupert Wyatt says No.

In this new telling, an ape treated with a genetic drug gains startling intelligence and releases that drug to his fellow apes, engineering an ape-volution by way of Big Pharm.

Will Rodman (James Franco) discovers a potential cure for Alzheimer’s disease called ALZ-112 (just had to have a ‘Z’ in it for action movie cred!) and tests it on chimps. His star chimp Bright Eyes soon becomes smarter than the American Bible Belt and probably half of both coasts (which isn’t hard to do), but is tragically killed, leaving behind a newborn, Caesar, who inherits his mother’s smarts and whose IQ rockets exponentially due to being Andy Serkis in a motion capture suit.

After his research is defunded, Will desperately uses ALZ on his fading father (John Lithgow, stuck too long on that show about aliens trying to figure how Earth works; great to see him in this welcome, heartfelt film performance), whose Alzheimer’s disappears! Two short years later, a tragic turn, as Lithgow once again starts acting like an alien trying to figure how Earth works. The ALZ fails in humans – but works gangbusters on chimps who have never seen 3RD ROCK FROM THE SUN.

Frieda Pinto is the veterinarian love interest. After being the biological mind of the movie for about five seconds, she is given nothing more to do except have flawless skin and kiss James Franco a lot (I guess that’s some peoples’ idea of a dream job).

Better than the latter four original PLANET OF THE APES movies, RISE is a fitting reboot, crafted with grandiosity, sincerity, inspiring soundtrack, and simply magnificent acting – from the apes!

The simians are complete CGI characters, yet with humans behind those pixels, in motion capture suits; technology hand-in-glove with emotion. Karin Konoval is Maurice the orangutan, Terry Notary is alpha chimp Rocket, Christopher Gordon is test chimp Koba and Richard Ridings is Buck the gorilla.

And Andy Serkis (THE TWO TOWERS, KING KONG 2005) is hirsute Olivier in a jugular performance as Caesar; his evocative eyes conveying pathos, wonder, befuddlement, contentment. As his life delves deeper into drama, his facial features assume more nuance; from introspective dissatisfaction to sinister agenda, and most disturbing of all – intelligence. And with intelligence comes desire. The desire to know his origins – and destiny. No longer content as the rudderless, leashed “pet,” his disdain for his position in life bleeds off his features. Not only is he sure that another destiny awaits, but from his mien, we are sure that he will handle it, whatever it is.

Caesar’s devotion to Will’s father leads him to attack the neighbors, whereupon he is court-ordered to an ape shelter. Thus, in exile, in a screeching madhouse – a madhouse! – where might is right, must Caesar shuck off his human upbringing and find his calling, to assume the mantle of his namesake.

The shelter is supervised by Bryan Cox. His son Dodge (Tom Felton) feeds the apes, cleans the cages – and bullies them maliciously. (Could we expect anything less from Draco Malfoy?) His cruelty, coupled with the instinctual hierarchic cruelty of the resident chimps, tips Caesar into animal. When Will visits and sadly tells Caesar, “No, we’re not going home now,” we can see the hurt and abandonment on Caesar’s face. And that is the moment the planet of apes begins its rise…

Caesar lifts a penknife from an intern, not to use in killing, but as a tool! Picking the lock of his cage, taking his cues from HOGAN’S HEROES, he comes and goes as he pleases, first freeing the gorilla, to have an Adam Baldwin bodyguard. (The scene where Caesar reveals to alpha Rocket how Buck the gorilla is now his foot soldier, is all the more brilliant because it is played wordlessly, with only facial expressions and body language!) Finally, Caesar steals Will’s ALZ canisters and releases the gas unto the apes. RISE tells us that apes were not kept as pets or librarians or hairdressers; rather, from this caged shelter did the Apes get off their hairy anuses to conquer mankind.

Recall Montalban’s tale of a virus; yes, there’s a virus in RISE, but it’s not killing cats and dogs – it’s affecting humans. And it’s spreading – if the classic airline-trajectories-on-a-world-map method is telling us anything.

On a historic day, there came an ape who spoke a word which had been spoken to him time without number by humans. He said: “No.”
–Cornelius, on video, BATTLE FOR THE PLANET OF THE APES (1973).

When Caesar utters that first word, it is as frightfully spine-tingling as the ram’s horn heralding the first glimpse of gorillas on horseback in PLANET OF THE APES. Caesar fiercely holds Dodge’s cattle-prod hand in check and Dodge cries out, “Get your stinking paw off me, you damn dirty ape!” Then, in thunderheads, comes Caesar’s retort – a guttural, bestial snarl, a tectonic vocal tremor – “NO!”… An emasculation of godhood that Draco has no spell against; the gorilla looks on, astounded, lips moving in unbidden soundless sympathy, trying to unconsciously emulate His Master’s Voice; in the far-flung future, a cage is being readied for Chuck Heston…

Action movie protocol takes over, in a battle between apes and men on San Francisco’s Golden Gate Bridge, a metaphor for “crossing over” from downtrodden to masters. And of course, they’re heading from south to north, as in “rising.”

Chimps clamber over cars, police blockade, gorilla against a charging horse, orangutans swinging underneath the bridge to flank their human assailants, cops in chopper (the same guard who had “too much iron in the blood” with Magneto!), gorillas pushing a bus on its side against a barrage of gunfire – and the Tom Cruise Stunt Award goes to Buck the gorilla for leaping into a hovering helicopter in slomo while bullets pummel his hide. (Is there a more terrifying sight – besides Tom Cruise coming at you with his body-shaved chest?)

Amidst the chaos, yet there is a touching camaraderie in the way all the apes look to Caesar as their leader. And a bittersweet ache in Caesar’s last parting with Will – waitaminute! So this “planet where apes evolved from men” was all James Franco’s fault? Today, the Redwoods, tomorrow… Moses! (There is a tiny clue on the future “Taylor” as we see a newspaper headline, “Lost in Space?”)…

…Amongst the mighty Redwoods, the apes congregate behind Caesar, all paying obeisance to him, still crouching on their knuckles. He turns and looks at them – and they all stand…

And the final question remains: When the future Taylor crash-lands that pointy rocket in that desert sea, who will be there to overact as much as Charlton Heston?

imdb
Word Count: 1,370      No. 914
The PLANET OF THE APES references are endless, woven into the fabric of the movie. Here is a small sampling:
• Character Bright Eyes – Zira’s name for Taylor;
• Caesar playing with a small Statue of Liberty;
• Character Dodge Landon – names of the two unfortunate astronauts on Taylor’s mission;
• Character Franklin – director Franklin J. Shaffner;
• Hosing Caesar in his cell – as the ape jailer hosed Taylor;
• Orangutan Maurice – actor Maurice Evans (Dr Zaius);
• Charlton Heston on TV in an excerpt from THE AGONY & THE ECSTASY;
• Dodge: “It’s a madhouse – a madhouse!” – Taylor’s cry of despair;
• Dodge: “Get your stinking paw(s) off me, you damn, dirty ape!” – Taylor’s first words when he regains his voice;
• An ape named Cornelia – play on Cornelius, Roddy McDowall’s star ape;
• Character Steven Jacobs – producer Arthur P. Jacobs.