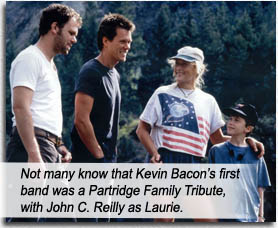 Kevin Bacon is definitely one of those good-guy actors who can pull off a sinister performance when called upon by a lusterless script. In THE RIVER WILD, he white-waters into mediocrity as the Bad Bacon, holding a family hostage to help him navigate Montana rapids after a heist. Is it TOO much of a coincidence that this movie is set on water and his name is … uh, Wade?

I’ve never considered Meryl Streep “hot.” Until now. Something about her unkempt hairdo and the fact that she’s the muscle in the raft. She’s shot the unshootable rapids called “The Gauntlet” before and Kevin needs her hotness for the plot to wend its way toward the whitewater climax.

Since I am no rafter, I can’t comment authoritatively on whether the rafting sequences are authentic. For thrills, it was mundane; for direction, it was adequate; for plot, it was necessary; for hotness, Meryl shouting orders at the men and getting all wet – it was priceless.

Strathairn works from the Plot Convenience Playhouse script of finding everything you need to rescue your wife and kid from a Bad Bacon.