Cry me a river…

Poor Philip José Farmer. Look what they did to his Hugo Award-winning story. To Your Scattered Bodies Go is the first of the Riverworld series of novels and winner of the award, which obviously meant nothing to the morons who crushed Farmer’s ideas under flatfooted filmic heel in RIVERWORLD. 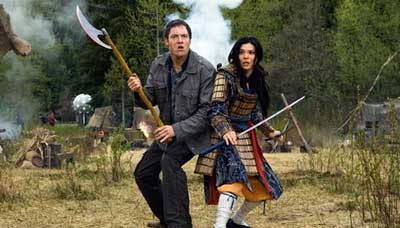 Stuart Gillard has the audacity to call himself director of this two-part television movie “based on the Riverworld novels,” resembling Farmer’s story in the sense that a dog turd resembles a sausage; with three spastics who actually thought they could rewrite Philip José Farmer – Robert Hewitt Wolfe, Randall M. Badat and Hans Beimler. TV writers and a TV director. Any wonder this epic tale of an alternate dimension looks so desperately like a car commercial is about to happen.

In Farmer’s story, everyone who has died on Earth since the dawn of humankind is resurrected on the banks of a seemingly endless river, naked, hairless, and wondering at their purpose. The hero, Richard Burton, wakes before his resurrection in a bizarre holding area where he floats amongst millions of suspended bodies in rows. On Riverworld, he searches for the source of the river as an answer.

My main complaint with Farmer’s story is that it becomes too mundane; that if it all starts to seem too much like Earth, well, why set it in another dimension at all?

This television RIVERWORLD suffers from the same problem as Farmer’s book, writ large. Not only has the gutlessness of censorship overtaken Riverworld – people are reborn fully clothed – they must experience a fate worse than death: being reborn into a Renaissance Festival. There is pain, hunger, lust, deceit, there are rulers and followers and everyone speaks English; all their tribulations, feelings and solutions are exactly those they would have experienced on Earth; one dork even gets resurrected wearing the same prescription glasses we presume he wore on Earth… So why not set the story on Earth fer chrissakes? The novelty of dying and rising into another life is wasted if you’re going to rise to an unimaginative life exactly like this wretched one. 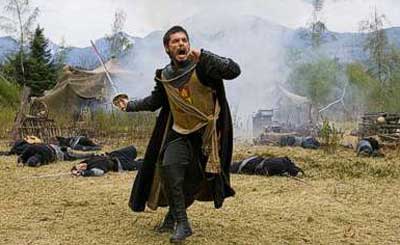 The cast look like porn actors with their clothes on (which is ironic, considering that everyone should be naked). The hero Matt (Tahmoh Penikett, whose lips make annoying shapes when he speaks) is a character made up by the three numbnuts who rewrote Farmer. And the character of Richard Burton (Peter Wingfield) has been rewritten as a Bond Villain. Then there’s the backstory of Matt’s relationship with Jessie (Laura Vandervoort, a dumb blonde whose boob size is inversely proportionate to her acting abilities), also a fabrication and forcing this story’s throughline as Matt constantly searching for Jessie. Play the drinking game for every time funny-lips says, “Jessie” and by the end, your sheer quantity of beer-pee will make its own riverworld.

Y’know, I stop paying attention completely when someone who can teleport and has telekinetic power and can resurrect people can be laid out with a Good Old-Fashioned American Right Hook, which Matt employs on Nightcrawler after Nightie shows him visions of his precious Jessie having Sexy Time with Burton. 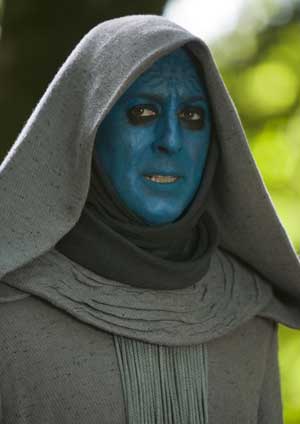 Suddenly, Samuel Clemens (Mark Deklin) appears with a riverboat and a slut. Then there’s a zeppelin. Technology like this can’t exist in a vacuum – it sweeps the people around it into its wake. There’s even a reincarnation of Conquistador conqueror Pizarro (whose Cheech and Chong impersonations become so bad, Mark Twain shoots him in the back) riding around on a robot horse – yet in a world of rivers, he still hasn’t whipped anyone into designing a water craft for him.

A samurai chick (Jeananne Goossen) who makes epicanthic eyes at Matt’s cleft lips, keeps saving his bacon in scuffle after scuffle, yet Matt (who uses every opportunity to pose dynamically in that sexy faux vinyl jacket) never takes the hint to mate with her and be done with puling over Jessie.

Meanwhile, Jessie wanders the riverbank in her tight jeans and D-cups looking like she’s acting sad over the loss of her man, wondering how she’ll ever get by without someone to buy things for her. Burton drops a line on her while eyeing her D-cups – next, they’re necking like high school kids from a 50s movie with all their clothes on.

Y’know, all these filmmakers had to do was Follow The Story In The Book and – lame TV effects aside – they might have crafted a reasonable story. Instead, they had to get uppity like the nitwits who rewrote Bradbury’s A SOUND OF THUNDER or King’s DOLAN’S CADILLAC.

Bluey Thea tells Matt that Jessie is “our only hope,” to save the Riverworld civilization, but of course, she isn’t. Jessie appears at the climax for some sensational DAYS OF OUR LIVES overacting, followed by a car commercial where we get to see REAL actors.

Immortal Anomaly.
Riverworld sports the technology of the Middle Ages and 1800s: explosives, swords, chain mail, bows and arrows, wine glasses, katanas. But if everyone is immortal on Riverworld, and there are the same resources as on Earth – metal, wood, water, chemicals, etc. – and they’ve been here for eons, wouldn’t the technology have surpassed even Earth’s technology? Scientists and inventors from all ages would be putting their heads together with unbridled accumulated knowledge, all able to communicate – Da Vinci, Asimov and Clarke providing ideas, Newton, Einstein and Feynman providing theoretical logistics and Tesla, Edison and Oppenheimer providing spanky finished prototypes. In other words, they should be way past RenFest if this place actually kept to its own rules – modern knowledge coupled with immortality.