A Tale of No Cities.

In a post-holocaust world, a father and son fend for survival, staying on the move for food, shelter, and the endless quest for a MAD MAX Trilogy Boxed Set. 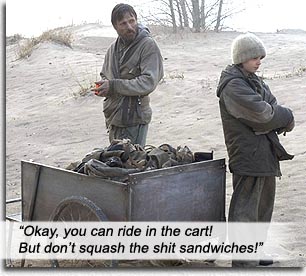 “In a moment the world changed forever.” More of an exposition than a slogan. It gets us on THE ROAD without having to explain why.

We meet The Man (Viggo Mortensen, going skeletal for the role, and actually covered in more poo than when he was Aragorn) and his son, The Boy (Australian Kodi Smit-McPhee) a scrawny, girlish tween; together tramping the titular road, a blasted landscape of destroyed buildings, ruined freeways, abandoned autos, amidst a bleak backdrop of constant rain, the rumble of far-off thunder, grayed sands, grayer skies and pagan desolation.

Director John Hillcoat (THE PROPOSITION, 2006) takes us into the riven soul of Cormac McCarthy‘s novel (screenplayed by Joe Penhall), with incredible visual attention paid to the details of the post-holocaust environment.

Small pockets of refugees forage, gangs search for fuel and food. Like MAD MAX, except not Humungus-gay.

The Man’s heartbreaking dreams reveal the idyllic life he once shared with his son and wife (Charlize Theron) in their home. As his real life journey progresses, his dreams become longer, more distressing. As the darkness howls outside, he remembers his wife complaining about not wanting to “just survive.” We get it: like most women, she wants a mansion and a boat and maybe a coupla black slaves. She would rather die than live in squalor or on the run from looting gangs. A brave role for Theron as an unlikeable, unsympathetic character. Usually fatalistic people in movies are male loners. But here, Theron has The Man professing his undying devotion to her, with the added responsibility of her young son, so her abandoning them is all the more nihilistic and cruel.

The Man begs her to stay just one more night with him, or to say goodbye to the boy, but she opts to walk into the darkness and die. Powerful stuff. Maybe she’ll meet a nice Humungus and settle down…

THE ROAD is not an adventure story per se, even though the man and boy do face intermittent action.

When they stumble on a cellar thronged with half-eaten living people, I grimaced, thinking the movie would skew to Running and Screaming from cannibals. Thankfully, surprisingly, it doesn’t – but goes deeper than horror, in a scene where the man almost shoots the boy in the head to save him from being captured by cannibals. As the man holds the cocked barrel at the boy’s forehead, the boy tearfully asks, “Will I see you again?”

Yes, there are cannibals, but they are not the feature creatures in this play – they are just another ominous encounter in a long montage of life encounters that the man and boy face staunchly. THE ROAD follows not only their bedraggled footsteps, but their stark relationship; at first, the man is all-knowing, training the boy to be resourceful and wary, “Look for others who have the light inside them”; eventually, the boy’s innocence would allow the man to retain some semblance of humanity as he slides deeper into suspicion and fear. 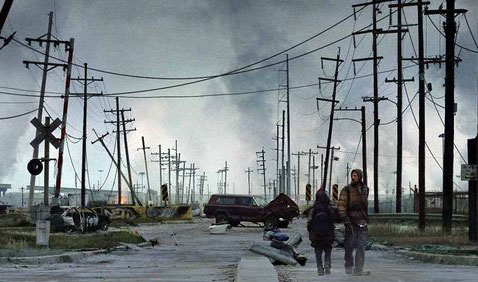 The future – and still no cell phone service worth shit.

Robert Duvall and Guy Pearce are unrecognizable cameos, yet no amount of makeup can mask the raw talent they bring to their small but effective roles. Duvall is old, rheumy-eyed Ely, whose sad reminiscences will bring a tear to your eye – for their content and his performance. (Didn’t Denzel just do an Eli on the road?)

The Road itself as a character is magnificent, its hellish backgrounds, buildings, props, set dressing, every detail disheartening; the weather closes in, dripping, creaking, blowing, plumes of smoke skyscraper-tall rise in the distance; every detail about THE ROAD is bereft of hope – the only spark left alive is the bond between a father and son.

Director Hillcoat stresses he actively tried to stay away from the MAD MAX look, yet the trailers for this controlled, tragic tale sell it like MAD MAX Redux. Of course they do, because that is all that lily-livered film execs think us cretins in the darkness understand. Explosions, running, killings, showing those few seconds of “action” that are organic to the tale when put in context, but entirely misrepresentative of what the tale is about; trailer builds with the perfunctory tribal drums, timpani booms and music rising until – the big dead spot, into which Viggo rasps something profound…

“You wanna get outta here? You talk ta me!”