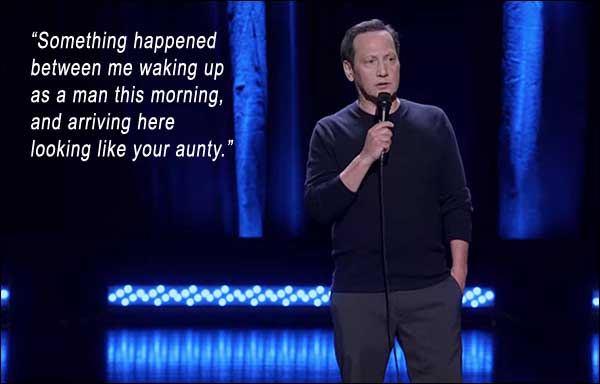 You Can’t Do Eet.

For a guy whose catchphrase is “You can do it!” Rob Schneider has spent decades proving that he can’t.

In ASIAN MOMMA, MEXICAN KIDS, Adam Sandler’s number one unfunny bottom bitch takes to the stage for his first ever Standup Special in Salt Lake City (just days before the Dumbo Donald Virus Shutdown in March 2020) and tackles adulthood, growing old, diversity, and his family, which he reminds us is Filipino and Mexican by constantly breaking into Asian and Spanish accents that are so racist, Mexico promised to pay for a wall just to keep him out.

Well, I’m being a bit harsh on Rob. The accents can’t technically be called racist – you see, being of Filipino descent on his mother’s side (a revelation to me), and having a Mexican wife (WAY-out-of-his-league Patricia Azarcoya), gives Rob a pass to playfully mock those two ethnicities. It’s why I can mock the East Indian accent with my siblings. It’s why black guys get to call each other nigger. My beef with Rob is that none of those accented bits are FUNNY.

Schneider started his showbiz career as a standup comic, and now at age 56, on his third marriage, after his illustrious stint on SNL as the Photocopier Guy, and after his scintillating D-List movie career as a gigolo, a hot chick, and various racist supporting characters, he says he wants people to know about his standup roots. I can’t understand why—what I mean is, I would understand why if he was GOOD at it. But we’re hard pressed to imagine that standup is this guy’s original forte, as all that Schneider presents here is uncrafted, middle-of-the-road sitcom humor that only a Filipino mother could love.

Schneider actually blurts out his catchphrase like some kind of nervous tic, “You can DO eet!” in the first 3 seconds of this show, like he’s desperately sopping up the dying applause with bread before the waiter takes the plate away, for a catchphrase that he tragically knows will garner no applause if thrown out to fend for itself all alone. When he breaks out the Photocopier Guy routine later, “The Robster, The Robinator…” that smattering of singular claps indicates it’s not as beloved a bit as he had hoped. All this pathetic lowbrow small-timeyness comes into sharper focus when we add the fact that Schneider is shown introducing himself on an offstage mic. Is he keeping it real or keeping it cheap?

One bit about men and women gets Schneider to first base: “I’m gonna sell out every guy in the room right now, I’m sorry… Ladies, the guy you’re with right now, I don’t care if you’ve been married 1 year, 2 years, 10 years, 20 years; I don’t care if you’ve got kids, grandkids – the first time he went out with you, he only wanted to have sex with you. That’s all he wanted.”

Edge-lord tries to get to second base but trips over the differences between a man married to a supermodel and a man married to a moderately attractive woman; a well-worn concept with enormous potential, squandered through Schneider’s lifeless delivery and general lack of talent, ruining all the goodwill he might have batted with the sex joke, stranding him at first base. (Did I just make a baseball analogy with the guy from THE BENCHWARMERS?)

And after all the Asian mockery, about halfway, Schneider brings out a young Asian pianist (Takeru Saito) who tinkles softly under the remainder of the “jokes” for the show. Is the big smile on this young guy’s face meant to mitigate the barrage of mediocre mimicry? For being onstage over the half the show, poor Takeru isn’t even in the main outro credit list, just a mention in the list of musicians. Geez, Schneider, can you BE any more of a lacist plick?! 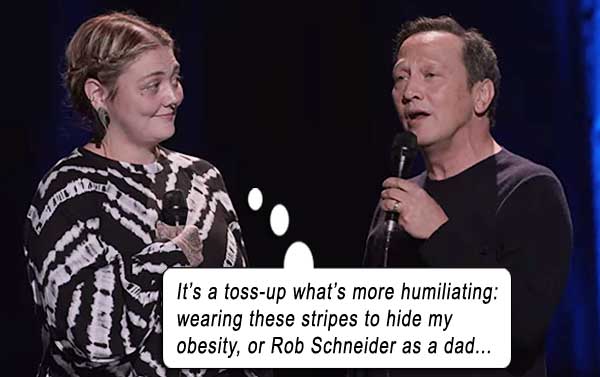 In the last segment of the show, Rob performs a vocal duet of Roy Orbison’s In Dreams with pop singer Elle King, revealing he is her father, a fact which many apparently were unaware of (myself included), but then, I have never been a follower of Rob’s life outside his one-trick-pony relationship with Sandler.

Now I don’t want to be uncharitable to the young lady Elle, who is obviously very successful, with two Top-10 albums, Grammy noms and headlining tours, but for a childless 31-year-old, who is a busy recording and touring musician, Elle shouldn’t have the body of a double-baby momma who sits around all day eating pizza. Am I fat-shaming? Well, that’s an interesting question, considering that all the directors of her music videos never shoot below her chestline. Do you really need a letter-writing campaign to these directors to ask why? Or how about Elle’s video for America’s Sweetheart, which constantly crash-cuts between nubile models on roller skates and Elle; shots of tight panty, luscious hips and thighs, interspersed quite purposefully with Elle’s upper body. So that we relate those delectable lower body shots with Elle’s face! Can you believe this duplicity?! So the directors quietly know what I’m saying out loud – and I’M the bad guy?!

So puh-lease – enough fake outrage. The fact that she looks 45, is covered in arbitrary tatts (including “Damn I’m good” over one boob), is a child of divorce, was married for just one year before a divorce of her own – all these things tell me that her unappealing body is the least of her psychological scars.

On this unforgiving open stage, Elle stands beside Rob, like the last bowling pin in a rack, while Rob starts to “sing” – and I nearly lose my shit. Accompanied by a 9-piece string section and poor young Takeru on piano, Rob takes the first verse and ululates like a mating gibbon, putting so much false vibrato in his voice I thought he was kidding at first, like a Monty Python bit. But through our frozen smiles, we realize he’s serious. He can hold a note, yes, but what’s with the impersonation of a speckled warbler? Truly, Movie Maniacs, it’s laughable, made all the more cringey because the crowd is unsure of how to react. Well, as a musician, I’m telling you – feel free to lose your shit.

Elle King is not much better. She’s a professional, she’s a ringer, so she’s got an idiosyncratic style (one of those definitive “yodel-y” country & western voices) that will brook no mocking when she’s doing her original pop material, but in this format where Rob just took a verse like a native Australian songbird, I’d be surprised if no one ejaculated just a tiny giggle when she started crooning in that redneck-tinged accent.

Orbison is turning in his grave: “Not Deuce Bigalow and Mama June massacring my song like howler monkeys in heat!” (Good harmonizing, though…)

To close the show, Rob brings his whole family onstage to say hi; there’s wife Patricia (slim and hot after 2 kids—so what’s Elle’s excuse for promoting her unhealthy lifestyle again?), and two daughters, one 7 years old, one 3 (whom Rob calls his “accident”). Rob loves to crow about Patricia being out of his league. She is. Ladies, if you don’t want us to believe that you are with an untalented, un-handsome, un-masculine guy for the money – then for what other reason are you with the untalented, un-handsome, un-masculine guy?

Directed by Tyler Spindel (who directed that other cinematic Sandler-produced masterpiece this year, THE WRONG MISSY), Rob Schneider’s dream of meaningful middle-age with ASIAN MOMMA, MEXICAN KIDS is horrendously turned on its head because HE’S the one doing it. And in any racist accent you’d care to apply – he CAN’T do eet.